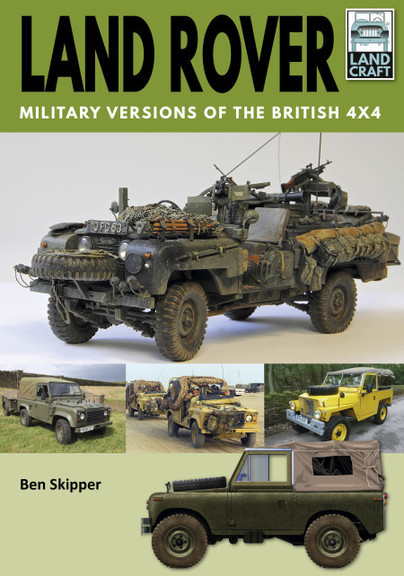 Here’s some additional information from the publisher…
After the Second World War many American military vehicles become surplus stock and soon found their way into the hands of farmers and land owners across Great Britain. The subsequent heavy use and the real possibility of difficulties obtaining spares led Maurice Wilks, the Rover Car Company Chief Engineer, to design and build a replacement. Not only would the new Land Rover fill a gap in Rover’s portfolio, but also bring in much needed post-war money.

Intended as a stop gap, the Land Rover would cease production almost 68 years later, after a production run that had produced over two million vehicles. During that time it would transform how the military saw and used motor transport. From utilitarian General Service truck to cutting-edge weapon’s platform the Land Rover would prove its worth time and again.

This latest LandCraft title looks at the design and development of the Land Rover as well as the military specific variants designed and built, including the famous SAS Pink Panther, the nimble Light Weight and powerful Forward Control gun tractor. The title will also look at those key conversions that took place on standard Land Rovers throughout the duration of its life span.

From the humble beings of the box like Series 1 to the formidable firepower and pace of the WOLF WMIK, the Land Rover was a constantly improved military vehicle. Through numerous trials, lessons learned and operational requirements the Land Rover was a vehicle that grew with the times.

This LandCraft title removes some of the mystique that surrounds the myriad versions and how the Land Rover developed. It also includes the story of the design and development of the exclusively military Light Weight and Forward Control versions. It also charts how the Land Rover became a virtual barometer for the technological and engineering developments that have occurred over the past 70 years.

It demonstrates how the Land Rover’s flexibility to change was its core strength. How the innovation of Rover and military mechanical engineers created a series of unbeatable military trucks.

This section also looks at the smaller, important developments and variations in design which showed how adaptable the Land Rover really was. From specialist signals line layers to first responder fire and rescue vehicles, to the unit- and theatre-led changes, the Land Rover was a vehicle that took all in its stride, proving its versatility.

For the modeller there is nothing more important than the little things and this image-rich section of LandCraft’s Land Rover title delivers the goods. Filled with crisp images, that chart the Land Rovers development, combined with detailed accompanying text, forms an enviable visual guide for the enthusiast and modeller alike.