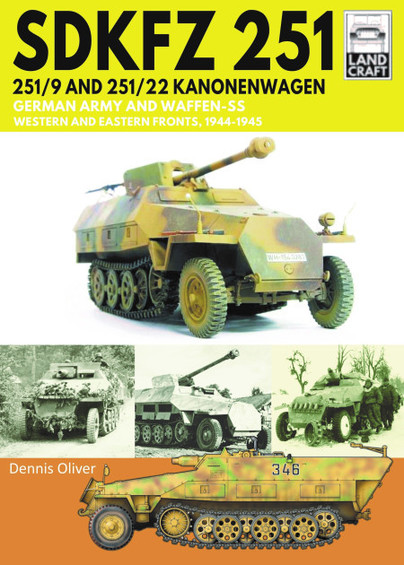 The Sdkfz 251 halftrack was one of the most versatile armoured vehicles produced by either side in the Second World War. Designed by the firm of Hannoversche Maschinenbau AG, or Hanomag, production ran to over 15,000 vehicles and it was eventually built as twenty-three separate variants serving as not only a personnel carrier, but also a command vehicle, mobile rocket launcher, armoured ambulance and bridge-layer. In his first book in the LandCraft series Dennis Oliver examines the Sdkfz 251 variants armed with the 7.5cm gun, initially used as an infantry support and reconnaissance halftrack and later as a tank killer as the result of Hitler’s desperation to arm as many vehicles as possible with anti-tank weapons. Drawing on official documentation and unit histories Dennis investigates the formations that operated these deservedly famous vehicles and uses archive photos and extensively researched colour illustrations to examine the markings, camouflage and technical aspects of the Sdkfz 251/9 and 251/22 halftracks that served on the Western and Eastern Fronts in the last months of the war.

A key section of his book displays available model kits and aftermarket products, complemented by a gallery of beautifully constructed and painted models in various scales. Technical details as well as modifications introduced during production and in the field are also examined, providing everything the modeller needs to recreate an accurate representation of these historic tanks.