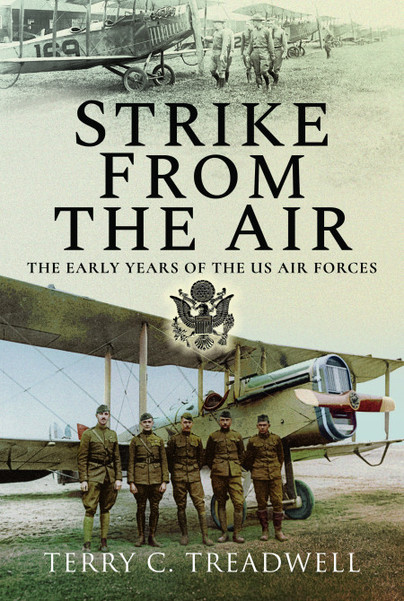 Get this book at Pen & Sword now

Take a browse inside this book now…

In Strike From the Air, the author shows the early development of the aviation section of the U.S. Army with balloons and the part they played in the Civil War. This is followed by an account of the first use of military aircraft when General Pershing tracked down the revolutionary Pancho Villa after he had crossed the Mexican border into the United States and attacked the town of Columbus, New Mexico, killing a number of American citizens. The development of naval aircraft during the invasion of Veracruz is also examined, which resulted in the first American aircraft to be hit by gunfire.

Following the outbreak of the First World War, the United States was gradually drawn into the conflict. Before this had happened, a number of American travelled to Europe to volunteer for the Lafayette Escadrille in France, as well as the Royal Flying Corps and the Royal Naval Air Service. Many of these men eventually joined the newly created United States Army Air Service, taking their valuable experience and knowledge with them. Among the notable early US aviators were individuals such as Eugene Bullard, the first African-American military pilot, and eccentric loners like Frank Luke. The part played by the US Navy and USMC is not neglected.

At the end of the First World War a group of American pilots joined together to form the Kosciuszko Squadron that fought against the Russians in the Polish/Russian War.

The final part of the book contains a number of escape reports by USAS pilots and observers, which gives a real insight into the conditions they, and other Allied soldiers and airmen, were subjected to in German prison camps during the First World War. To complete this fascinating look at those exciting and challenging early days, Strike From the Air includes approximately 250 photographs, many of which have ever been seen before.