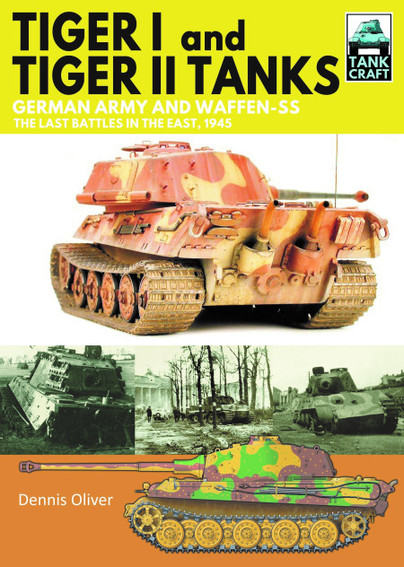 By the first weeks of 1945 the Eastern Front had been pushed back to the Carpathian mountain passes in the south and Warsaw on the Vistula River in the centre while in the north the German army was fighting in East Prussia. The Wehrmacht’s armoured and mobile formations were now employed exclusively as fire brigades, rushed from one crisis to the next as the Red Army pushed inexorably westward. Critical to the German defence were the army’s heavy Panzer battalions whose Tiger tanks, with their 8.8cm guns, were almost invincible on the open plains of central Europe.

In his latest book in the TankCraft series Dennis Oliver uses archive photos and extensively researched colour illustrations to examine the Tiger tanks and units of the German Army and Waffen-SS heavy Panzer battalions that struggled to resist the onslaught of Soviet armour during the last days of the conflict which culminated in the battle for Berlin. A key section of his book displays available model kits and aftermarket products, complemented by a gallery of beautifully constructed and painted models in various scales. Technical details as well as modifications introduced during production and in the field are also examined providing everything the modeller needs to recreate an accurate representation of these historic tanks.
PICs 2-5