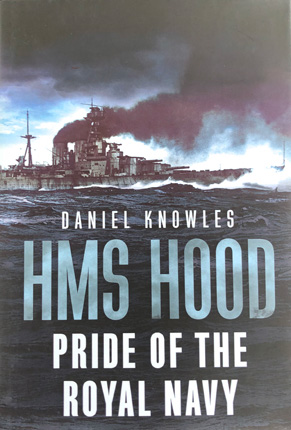 Get this impressive title here now at Fonthill Media
HMS Hood: Pride of the Royal Navy charts the life and death of this legendary battlecruiser in both peace and war from her early origins, through the interwar years, to her destruction.
Highly recommended
Geoff C.

Take a browse with me now…

• Beautifully illustrated with many rare and unpublished photographs

• A must-have for military and historians, enthusiasts, modellers and those interested in the complexities of naval warfare during the Second World War.

For over twenty years, HMS Hood toured the world as the most iconic warship in the Royal Navy. Unmatched in her beauty and charisma, Hood is one of history’s greatest warships.

During the twilight years of the British Empire, Hood toured the world showing the flag as a symbol of British power. As the Royal Navy’s show-ship, Hood came to command a special place in the hearts and minds of the British public.

Such was the regard for the Hood that her destruction on the morning of 24 May 1941 by the German battleship Bismarck created dismay across the world. Within minutes of entering battle, ‘the Mighty Hood’ as she was affectionately known, was destroyed by a catastrophic explosion, which had echoes of Jutland a quarter of a century earlier. Out of a crew of a crew of 1,418, only three survived.

The sinking of HMS Hood was the single largest disaster ever sustained by the Royal Navy.