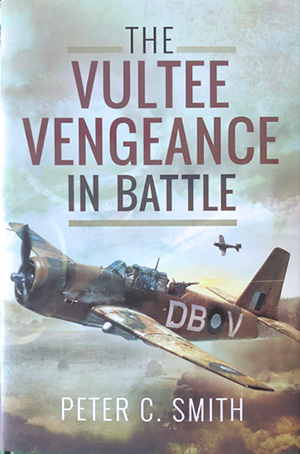 This book describes the extraordinary combat career of the American-built Vultee Vengeance dive-bomber in both the Royal Air Force and Indian Air Force service during the Burma Campaigns of 1942-45. This single-engine, all-metal aircraft was ordered by the Ministry of Supply during the darkest days of World War II when the lethal German combination of Junkers Ju.87 Stuka and Panzer tank forces had conquered most of Europe in a campaign that lasted a mere few weeks and the invasion of Britain was considered imminent.

The RAF had invented the dive-bomber concept in 1917 but had consistently rejected it in the inter-war period with the obsession of heavy bombing predominating official thinking almost exclusively. By the time the Vengeance arrived a still-reluctant RAF was seeking a precision bomber to prevent a repeat of the Japanese Naval attacks in the Indian Ocean and six squadrons were set up to counter this threat. With the Japanese on the borders of Burma and India, these aircraft, no longer required for the original role, proved by far and away the most accurate bomber aircraft operated by the British up to that time.

The Allied Armies on the ground, including Orde Wingate’s Chindits, clamoured for their continued use and considered them essential, but in vain, and by 1945 all had been replaced. Their achievements have been ignored, falsified or scorned ever since but here, from eyewitness accounts and official records, is their full and true story.