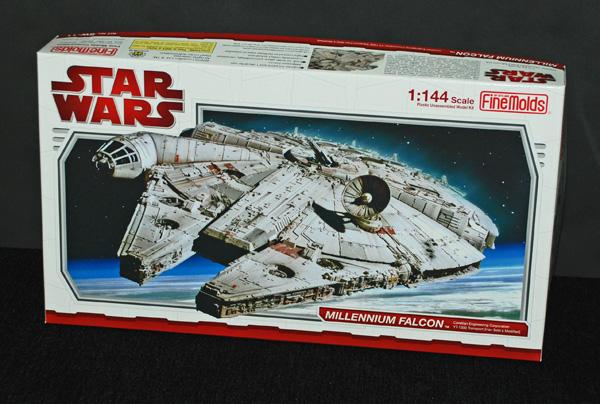 The Millennium Falcon has to be one of the most iconic science fiction space ships ever. From its first appearance in Star Wars Episode IV: A New Hope in 1977 this “heap of junk” has fuelled the imagination of many a star struck child and adult alike. The Millennium Falcon is a Corelian Engineering Corporation YT-1300 Transport ship, this version has been heavily modified for smuggling duties by its owner Han Solo and can do the Kessel run in under 12 parsecs.

There is just something about the shape and form of the Falcon that is just right, the disc shaped main body with the two front protrusions and the cockpit off to one side just work. George Lucas has said that the Falcon was based on a hamburger with an olive on the side forming the cockpit! This was not the original incarnation of the Falcon, the Rebel ship used in the opening scenes was the original but its elongated shape was considered to be too much like the Eagle Transporters from Space 1999 so a new model was developed.

As far as plastic model kits of the Millennium Falcon go there have only been a few, these being produced by MPC and to say the quality and accuracy was poor is an understatement. With a lot of work they could be made acceptable but still not accurate. In 2005 Fine Molds announced that they were producing a 1:72 Millennium Falcon and following their previous Star Wars kits it was received with great enthusiasm and then in 2010 they also released a 1:144 scale version.

This review and build is of that smaller version of this classic space ship.

What’s in the box!

The box is Fine Molds standard 2 part offering with a picture of the Falcon in flight on the lid. 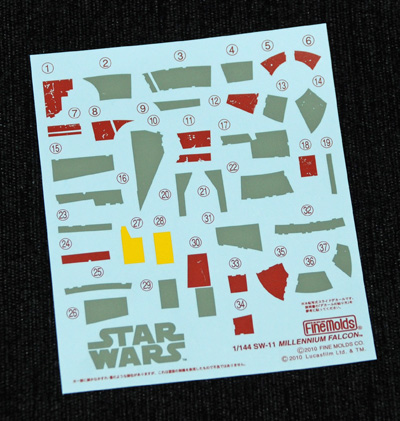 On opening the box the first thing that you notice is how full the box is, though there are not many sprues what you do get fills the box nicely. The main body is moulded in 2 parts, A and B and the rest of the kit is spread across 4 sprues. The ancillary parts are contained on sprues C and D with the clear parts on sprue E and the stand parts on sprue F. As with all Fine Molds Star Wars kits the mouldings are clean with no flash and the detail is crisply reproduced in a grey plastic. 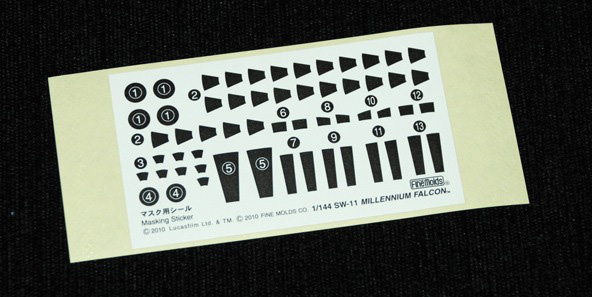 The kit decal sheet is quite small and provides the coloured panels that adorn the outside of the ship. If the decals are as those provided in other Fine Molds kits they tend to be brittle and benefit from a couple of coats of gloss varnish before use. Another nice touch from Fine Molds are the masks supplied for the glazing, although not pre-cut they are a welcome addition. You also get a colour reference sheet that has top and bottom views of the built and painted kit showing decal placement and giving some inspiration for the weathering.

The instructions are an eight paged folded sheet, just slightly smaller than A4, showing the parts of the kit, the usual precautionary notices and the 16 stages of construction. The only thing that this reviewer would criticise is that the majority of the instructions are in Japanese with only the colour references being provided in English.

The paint references are provided for both Tamiya and Gunze-Sangyo (Mr Color) and if you use the decals for the panels then the only colours called for are flat black and light grey, this being AS16 in Tamiya Spary or 338 in Mr Color.

On closer inspection of the parts Fine Molds have been true to the original kit bashing style that was used to build the Studio model and parts from tanks, cars and aircraft can be seen. On parts 16 & 17 you can clearly see the Tamiya F1 gearbox halves.

The cockpit interior is, as would be expected in this scale, lacking in detail and the omission of any crew means that displaying the finished kit in flight mode may not be an option to some. The kit does include the option to have the landing gear down and these are reproduced nicely as a 3 part assembly for each of the 7 legs.

The Falcon has a number of recessed plant areas and these are provided by separate parts that are fixed to the inside of the main body parts making painting a fairly simple task.

The only area that lets the kit down is the engine section which is moulded in the normal grey plastic which means that should you want to light up the kit an alternative solution would need to be sourced. As there is already a clear sprue in the kit it would have been nice for part 14 to have been included on that sprue giving the builder the option to either paint it as instructed or fit LEDs for the engines. 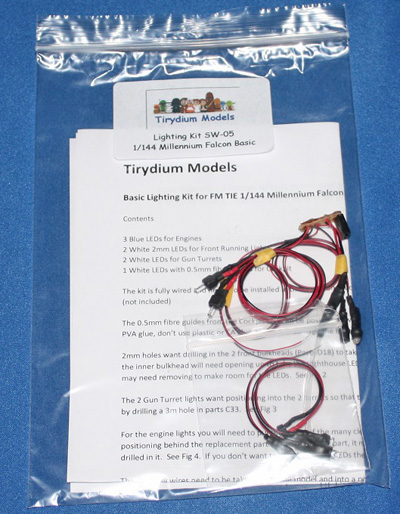 To enhance the base kit, the subsequent build will also include lighting using the LED Lighting Set produced by Tirydium Models and a replacement from Starship Modeller for the kit part 14. 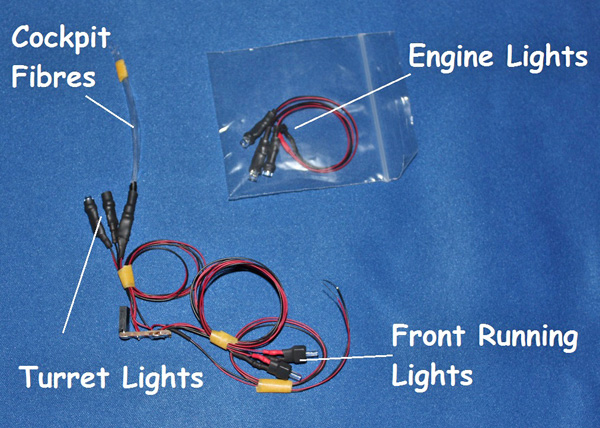 Finally as I intend to build the Falcon in flight mode I will source a couple of 1:144 railway figures to depict Han Solo and Chewbacca.

So on with the build… check out Build Now for that and when finished you’ll find this one in Finished Now!
Warren M.