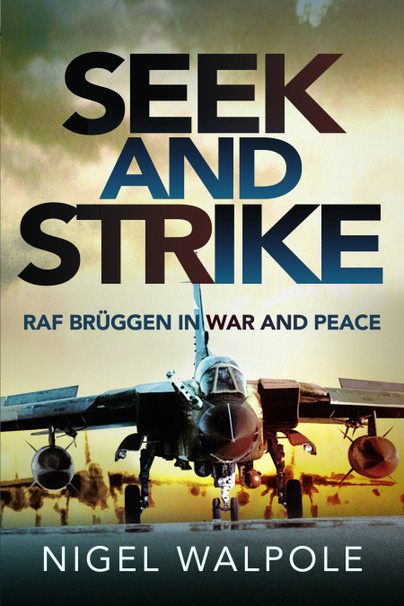 Seek and Strike – RAF Brüggen in War and Peace is an anecdotal history of the largest RAF station in Germany. Optimised for a new breed of aircraft, and to NATO requirements, this huge airfield was cut out of the Elmpt Forest, on the German border with Holland, and completed in one year to become operational in 1953. First occupied by a fighter wing equipped with Vampires, Sabres and Hunters, its ‘Seek and Strike’ motif took on real meaning when the station re-equipped with strike, attack and reconnaissance Canberras, followed by strike/attack Phantoms, Jaguars and finally Tornados.

RAF Brüggen was at the forefront of the Cold War, during which innovation and determination brought it many accolades. It further distinguished itself in the Gulf War and continued to play its part in subsequent monitoring operations in that theatre; it was also the only Tornado Wing to operate directly from its home base during the Kosovo campaign.

This is the story of a station at war, of the men and women at the sharp end and in support. At work and play, it was they who made Brüggen what it was, excelling in all things and justifying a claim to have been RAF Germany’s ‘jewel in the crown’. With its closure in 2001, the RAF relinquished its last main operating base outside the UK. Brüggen was indeed ‘last and best’.