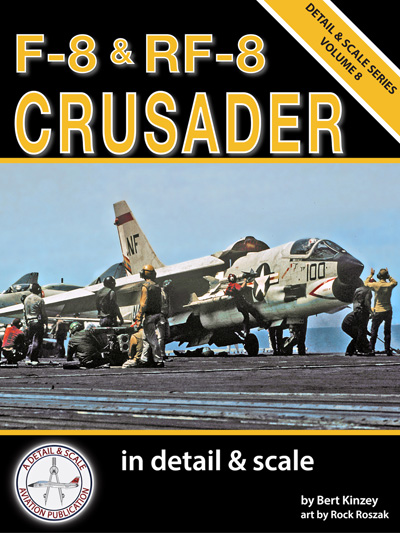 Here’s another outstanding addition to the in Detail & Scale Series this time featuring the F-8 and RF-8 Crusader.

The extent of the content is such that this really is the best one-stop-shop reference for the Crusader and will please many scale modellers.

I notice that the title this time is also available in paper copy and some of you may want that version – for me, the e-book wins hands down for ready access and is available at the touch of a button. 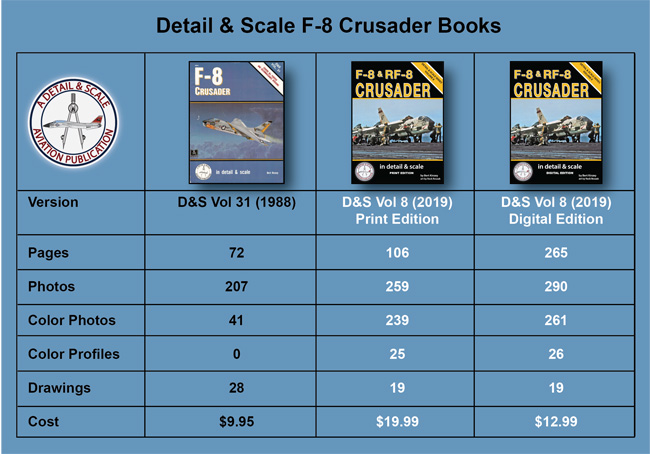 F-8 & RF-8 Crusader in Detail & Scale is an extensively detailed look at the F-8 Crusader, with more color photos of this iconic Navy fighter than any other book ever published. This digital version features more than 260 pages, 290 high resolution photographs (261 in color), 26 full color profiles and 19 Illustrations.

Detail & Scale produced its first book on the F-8 Crusader in 1988, and it was one of the most successful titles in the Detail & Scale Series. This new work, F-8 & RF-8 Crusader in Detail & Scale, brings our original work forward 31 years, enriched with much new content, more photos, mostly in color, and the addition of dozens of illustrations and full color profiles. The photographic collections of some of the very best aviation photographers have been opened to Detail & Scale, and several recognized experts have also contributed to this new book, resulting in a new, more comprehensive, and much larger publication on the Crusader.

The book begins with a comprehensive developmental and operational history of the Crusader, a jet fighter that achieved a number of firsts and went a long way towards bringing Naval carrier-based fighters to a level equal to and in some cases surpassing that of land-based fighters. This is followed by a chapter covering every variant of the Crusader produced for the U. S. Navy and Marines, from the prototypes, all of the F-8A/B/C/D/E variants and their upgraded versions after the remanufacture program, the two-seat TF-8A, both the original and remanufactured versions of the RF-8 photo reconnaissance variant, and the XF8U-3 prototype, often considered the best aircraft ever cancelled. Chapters on the F-8s used by NASA in advanced flight research and the Crusaders used by the French Navy and the Philippine Air Force follow.

An area of wholly new content is contained in a chapter on the Crusader in the Vietnam War. A summary of how the Navy and Marines used the F-8 and RF-8 in Vietnam is provided, including a listing of every fighter squadron that flew the Crusader in combat. A comprehensive table lists all of the F-8 carrier deployments carried out by the Navy fighter squadrons as well as the Marine squadrons that flew out of Da Nang Air Base, South Vietnam. The chapter concludes with color photographs and full color profiles of all nineteen F-8s responsible for the confirmed destruction of MiGs in air combat.

A comprehensive chapter on Crusader Details, long the hallmark of the Detail & Scale brand, follows. This chapter contains nine sections covering the cockpit, windscreen and canopy, fuselage, landing gear, wings, tail, engine, armament, and ECM equipment details. Complete coverage of almost every square inch of the various variants of the Crusader is provided through 141 high resolution photographs and illustrations (127 in full color).

As with all Detail & Scale books, the final chapter covers the scale models of the Crusader, from the early kits that are now only collector’s items, to the gamut of kits that have been available for the past half-century. The standard modeling scales of 1/144th, 1/72nd, 1/48th, and 1/32nd are treated as separate sections and the available models in each are reviewed.

The iTunes link to the iBook version

The Amazon link to the Kindle version, which is identical (except for the “How to use this publication on your iPad”)

This book is available in printed form, too, from Amazon.com