On August 1st 2013, a group of hikers was under taking a challenging alpine climb in the Mount Waddington mountain range on the West Coast of British Columbia. The group was scaling the slopes of Fascination Mountain when a male hiker fell down a steep slope sustaining injuries. Following notification of authorities a civilian helicopter attempted to recover the injured man, but the combination of the high altitude and treacherous location made it unsafe for the civilian helicopter to complete the rescue.

The Joint Rescue Coordination Centre (JRCC) located in Victoria British Columbia contacted 442 Squadron (Sqn) at 19 Wing Comox in order to task the extremely capable CH-149 Cormorant helicopter to undertake the rescue. On SAR standby that evening was Major Troy Maa, Aircraft Commander (AC) of the CH-149 Cormorant. JRCC Victoria provided Major Maa with the details of the upcoming rescue mission. Initial reports had the hikers located at the 10,000 foot level on the mountain and with night time now approaching Major Maa realized this would be an extremely challenging rescue mission.

Although the CH-149 crew would be wearing Night Vision Goggles which would help them see in the dark, the CC-115 Buffalo, 442 Sqn’s fixed wing aircraft was tasked to provide illumination of the rescue scene by dropping parachute flares. Participation, by both the CH-149 and CC-115 made this mission truly a 442 Sqn full team effort. After being briefed on the rescue mission, the Cormorant Flight Engineer (FE), Cpl Kent Campbell, calculated the power required to hover the Cormorant helicopter at 10,000 feet using the aircraft performance charts. Calculations indicated that in order to conduct the mission the crew would need to ensure the helicopter was as light as possible and use all available power from the aircraft’s three General Electric engines. Rescue 903 arrived on scene to find the injured hiker’s group had taken shelter on a tiny ledge on an extreme slope at the 9300’ level. With fuel levels approaching minimums for the rescue, it was decided to descend to the nearby abandoned airstrip at Scar Creek and off load all non-essential gear.

After removing 500kg of gear, the crew returned to the extraction site to attempt the rescue. There was little margin for error once the aircraft arrived in the hover over the rescue site due to the high altitude which demanded maximum performance from both the aircraft and crew.

Over the rescue site, Major Maa maintained a steady hover allowing for the insertion of the SAR Tech’s, Master Corporal Christian Morrissette and Sargent Guy St-Denis via rescue hoist. The First Officer (FO) Captain Francois Fasquelle coordinated with the CC-115 overhead in order to allow for accurate positioning of the parachute flares which provided critical illumination to the rescue scene. Due to the steepness of the mountain slope the hoist had to be conducted at an extremely challenging 150 feet above the hikers in order to ensure that the Cormorants’ main rotor would not contact the mountain side. The extra height kept the helicopter clear of the steep slope, but the long cable would mean the SAR techs could swing and spin more violently.

The first hoist down was complicated by turbulence and buffeting rotor downwash. The SAR Tech made it to the ground 15 feet lower than the ledge and had to scramble up the slope while still connected to the rescue hoist. The second SAR tech was lowered with the aid of a guideline held by the SAR Tech already on the ground, which was complicated by the lack of steady footing and the steepness of the slope.

Once both SAR techs were on the ground they combined their efforts in order to guide the rescue basket to the ground which was being tossed violently by the aircraft rotor downwash. Once the SAR Techs and rescue basket had been delivered to the rescue site, Major Maa moved the aircraft away from the site in order to allow time for the Master Corporal Morrisstette and Sargent St-Denis to prepare the patient for recovery.

However, Rescue 903’s fuel level had now reached 550kg which was only 150kg above the minimum calculated 400kg needed to complete the mission with safe reserve fuel. Captain Fasquelle contacted the SAR techs and told them to expedite packaging the patient for the hoist as the aircraft was going to return immediately for the extraction. The remaining 150kg of fuel meant the hoist extractions would need to be completed as quickly and efficiently as possible.
With the patient secured in the basket on the ground, the hoist cable was lowered to the SAR techs with a planned guideline assisted hoist to bring the basket up to the helicopter.

The powerful downwash from the Cormorant began blowing the basket violently as soon as it left the ground. The SAR techs wrestled the guideline and struggled to maintain control of the basket as it rose to the helicopter, and managed to keep excessive spin or swing from developing.

Once the rescue basket with the patient was safely in the helicopter the SAR Techs were hoisted up and the aircraft departed the rescue site. Rescue 903 left the site just prior to 400kg of fuel and headed to White Saddle Ranch, landing with only fifteen minutes of fuel remaining.

After the aircraft had taken on more fuel, the return to Comox was completed without incident. Following this mission, investigations determined this rescue to have been the highest altitude hoist ever conducted by this aircraft type to date. This mission was successful in rescuing the injured hiker due to the determination and courage of the crew operating the CH-149 Cormorant in an extremely challenging environment and at the edge of its performance envelope. 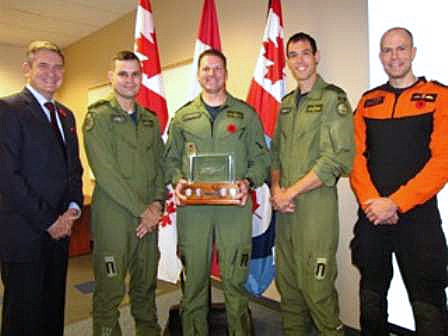 All were stationed as the crew of CH149 Cormorant helicopter “Rescue 903” with 442 Squadron at Canadian Forces Base Comox at the time of the rescue.
Source:
http://ottawacitizen.com/news/national/defence-watch/rcaf-cormorant-helicopter-crew-receives-accolades-for-difficult-rescue

The kit and the plan…