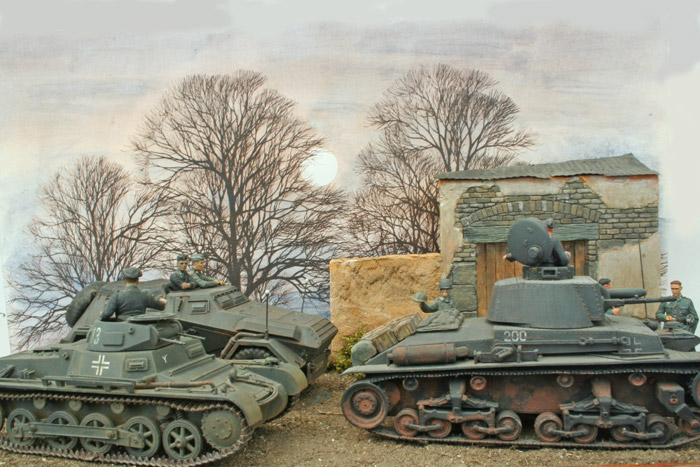 Despite being outnumbered by the Allied forces, Germany was able to overcome the combined armies of the Low Countries and France through the tactics of Blitzkrieg. A key feature of the tactic was the lightning deep penetration strikes cutting supply lines and disrupting troop movements. The following diorama was constructed to represent part of an armoured column that led the attack.

All were straightforward builds therefore details about their construction has not been covered in the article. Of note, the command car was resin with the body being a single piece casting. The suspension and body detail such as mud guards was added and did not offer any major challenges.

Figures came from a variety of sources including Dragon, Verlinden and Andrea being a mixture of 1:32nd and large 1:35th scale. The positioning of the figures within the diorama was made to infer a relaxed confidence amongst the advancing soldiers. 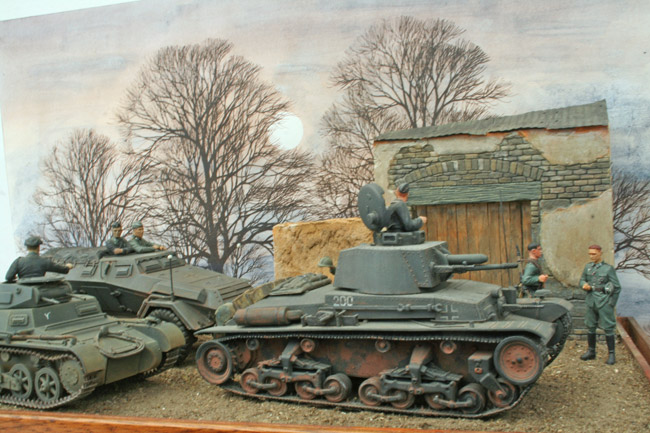 The most numerous tank in the German arsenal was the Panzer 1 with poor armour protection and armed only with two machine guns. The introduction of the Czech Panzer 35t and Panzer 38t were welcome additions with improved armour, weaponry and space. The comparison between them can be made in the photograph above. 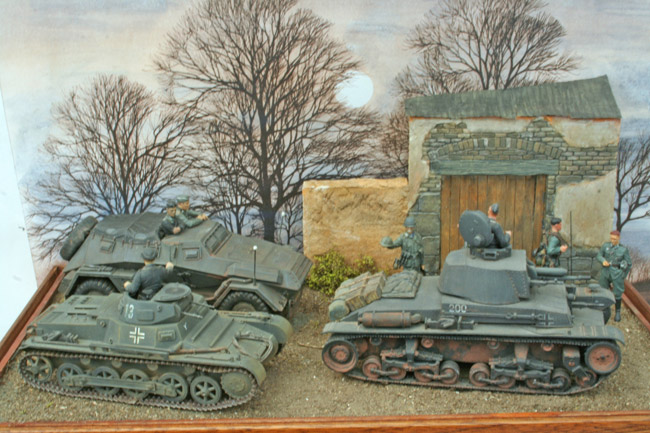 The groundwork was applied to the base with a thick layer of PVA glue covered by dried and sieved fine soil from the garden helping give a realistic look. 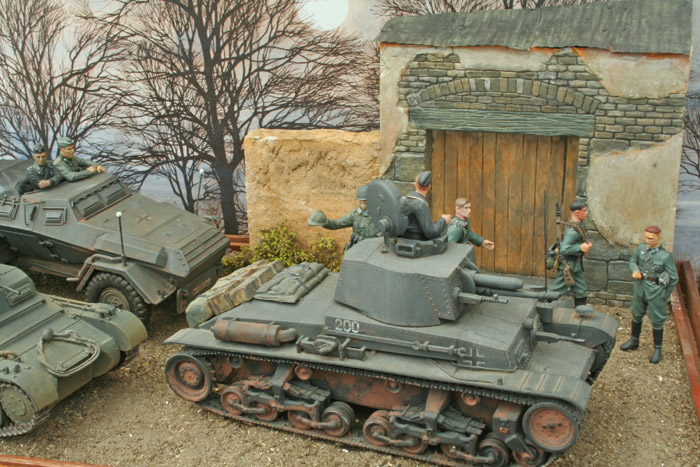 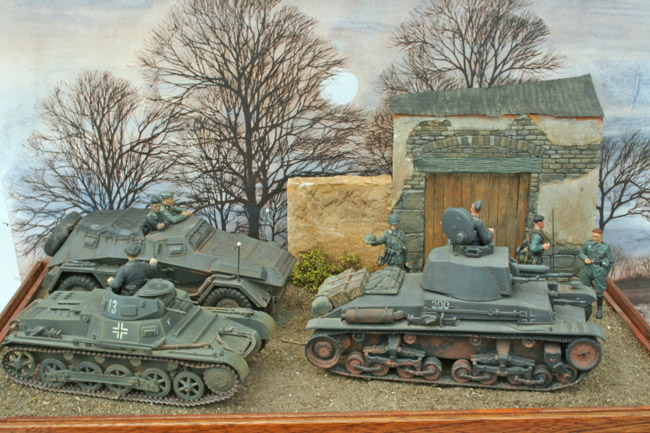 The vehicles were weathered to give a dusty appearance that would have occurred while travelling at speed over country roads. 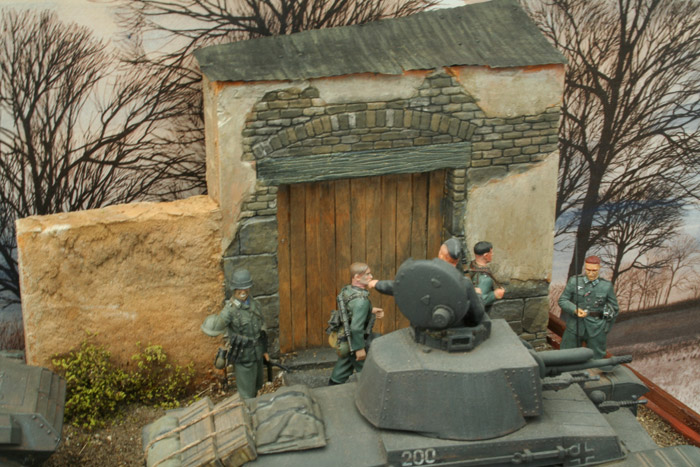 The door was cast into the wall in plaster with an unrealistic look. Using cutdown coffee stirrers to cover this important feature, then stained to give a variation in tone, improved the building appearance. The brickwork was painted with a variety of earth colours from deep red to almost pure white which helped break up the wall. A burnt umber wash helped detail the mortared brickwork.

The roof was constructed from corrugated paper detailed with railway tacks as rivets. Starting with a dark grey base colour, it was then weathered by dry brushing with metallic shades of paint and rust coloured pastels. 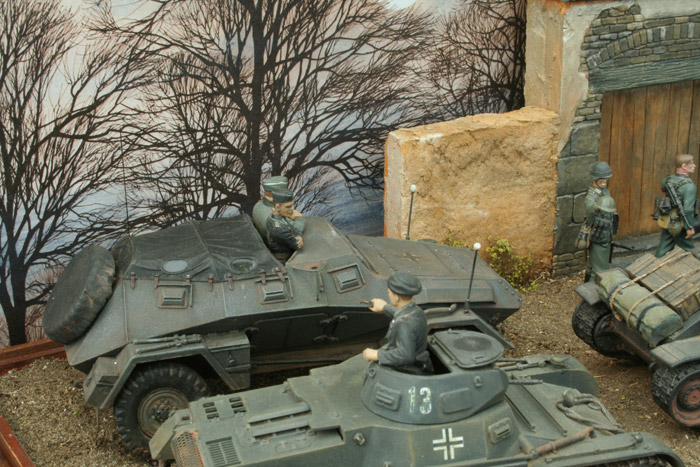 The Panzer 1 commander still wears the original tanker’s beret which by the time of the invasion of France was being phased out by side caps as headwear.

The roof of the building was deformed to give the typical well-worn/battered appearance that corrugated iron panels take on. Although only four infantry figures were used, they were considered sufficient to give the impression of a column supporting the armour.

Despite being sourced from different manufacturers, the figures blended in well together with one character showing off his souvenir from battle. 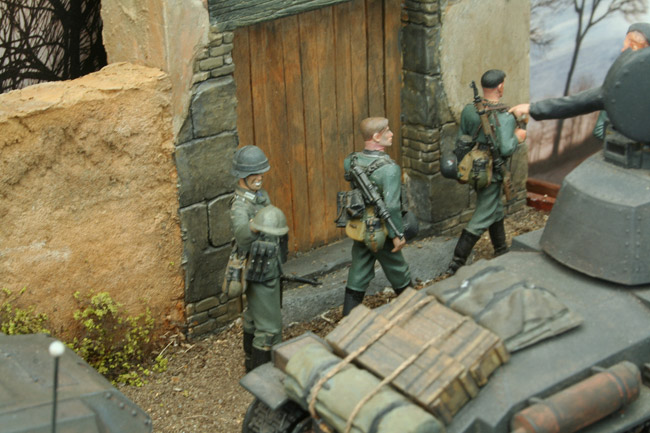 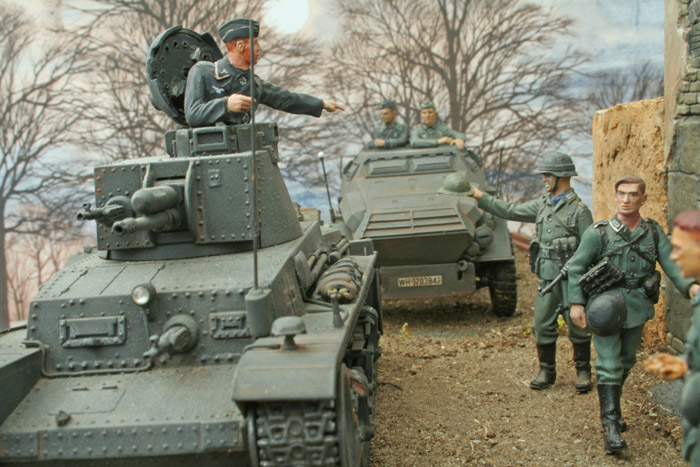