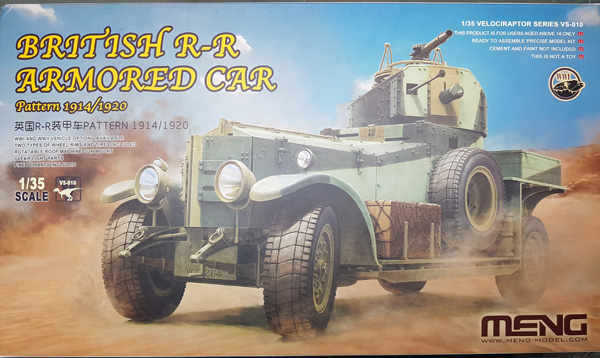 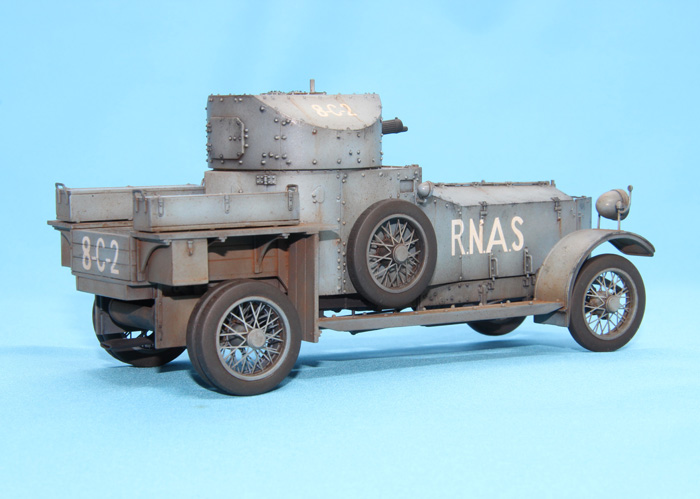 The Royal Air Naval Services British armoured car squadron during the First World War. In September 1914 all available Rolls Royce Silver Ghost chassis were requisitioned to form the basis for the new armoured car. The following month a special committee of the Admiralty Air Department was Flight Commander T.G. Hetherington, designed the superstructure which consisted of armoured bodywork and a single fully rotating turret holding a regular water cooled Vickers machine gun. The first three vehicles were delivered on 3 December 1914, although by then the mobile period on the Western Front, where the primitive predecessors of the Rolls-Royce cars had served, had already come to an end. Later in the war they served on several fronts of the Middle Eastern theatre. Chassis production was suspended in 1917 to enable Rolls-Royce to concentrate on aero engines

The vehicle was modernised in 1920 and in 1924, resulting in the Rolls-Royce 1920 Pattern and Rolls-Royce 1924 Pattern. In 1940, 34 vehicles which served in Egypt with the 11th Hussars d the “old” turret replaced with an open-topped unit carrying a Boys anti-tank rifle, .303-inch Bren machine gun and smoke-grenade launchers.
Some vehicles in Egypt received new chassis from a Fordson truck and became known as Fordson Armoured Cars. Pictures show them as equipped with what appears to be turrets fitted with a Boys ATR, a machine gun and twin light machine guns for anti-aircraft defence. (Source Wikipedia) 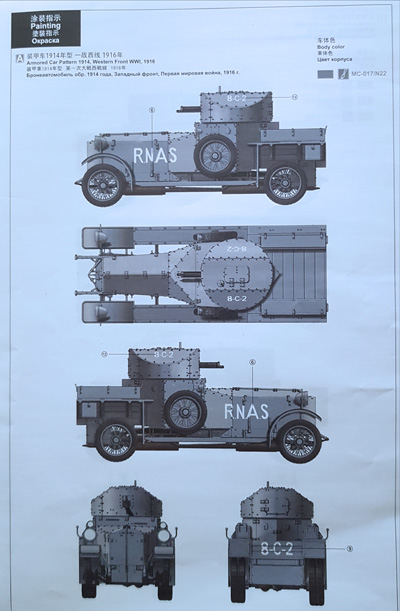 Meng’s Rolls-Royce Armoured Car can be constructed in four different versions, ranging from a version from the beginning of WWI right up to a version used by the RAF in Egypt in the 1920s and one during WW2 and Meng supply alternative weapons and wheels to facilitate this. I was immediately drawn to the earliest vehicle used by the Royal Naval Air Service in 1914. However a quick check of info and images on the internet suggested that the single Meng-supplied turret is the wrong type for this particular version in that it’s too tall and only valid for the two later RAF machines. However, I was determined to build the 1914 version so I could utilise those gorgeous etched brass spoke wheels provided in the kit.