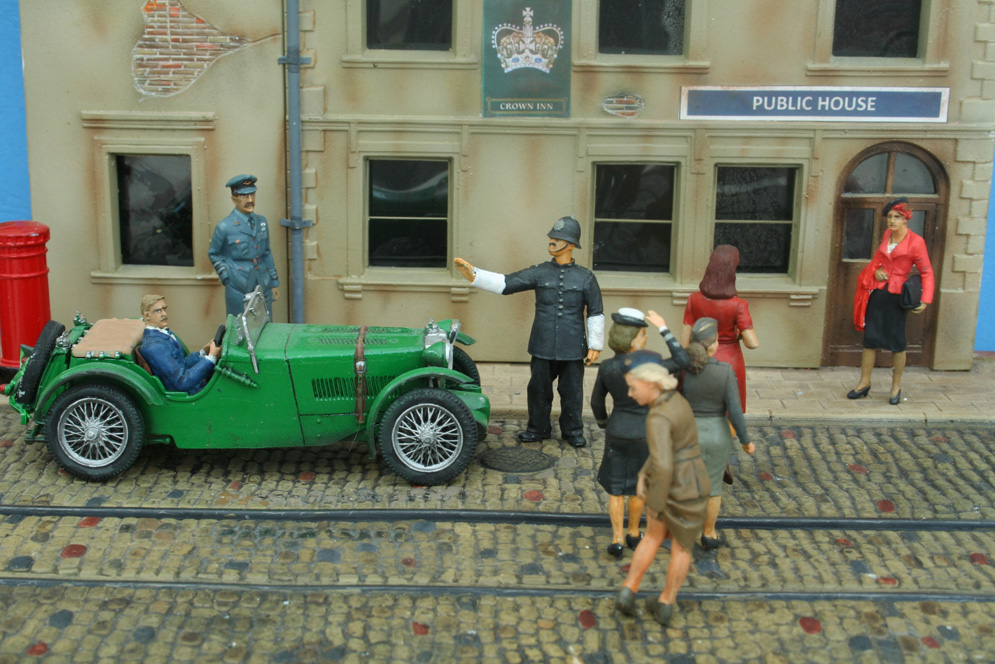 The Idea and Planning Steps

The idea for the following diorama had been a long standing wish to represent the spirit of resistance and the attitude of “live for today” shown by those in Britain during the Second World War. Manifesting in an attitude to enjoy life and the desire to keep some semblance of normality resulted from Germany waging a programme of total war against both military and civilian populations.

The aim was to represent a group of friends/work colleagues meeting for a night on the town. Putting the diorama together was greatly helped by the release of a number of figure sets from Master Box (MB) of female civilian and military figures (see later). Figures were selected from different sets, along with some from other manufacturers.

It should be noted that the US Navy did not allow female personnel to serve outside the USA so the figure represents a bit of poetic licence.

As a backdrop and to give the group a purpose, a Mini Art building was modified to represent the public house where the group was meeting for the night’s festivities. A male “audience” consisting of a RAF pilot and the driver of an MG Magnette sports car was added to reinforce the focus on the group. To further connect the group, a policeman was placed stopping the car in order to allow the women to cross the road.

Normally in a diorama, it is best that the groundwork and any vehicles included are set at an angle to the base. In this case the focus needed to be on the group with the women. This was done by having set them out in a line heading straight to the pub door.

The male “audience” consisted of a RAF pilot (Chota Sahib), the driver of the MG (Airfix kit with a replacement Hornet head) and the policeman (Wee Friends). Their use was to add balance to the diorama in terms of space and through their observation, enhance the viewer’s focus on the female group.

The blackout window covering (an important wartime feature) was created by sandwiching an acetate slide followed by black card and the back closed by gluing and trimming a sheet of plastic card to the back of the building.

The intended destination was emphasised by the pub signs generated in Word/Internet photos and printed on card. The location was reinforced by the street name sign and the inclusion of the UK style post box which started life as a souvenir key ring.

The figures are a mix of 1:32 and 1:35 scales but go together well. The Navy figure has been painted to represent her in her “Blues” uniform whereas the figure is in her “Pinks” in the kit. 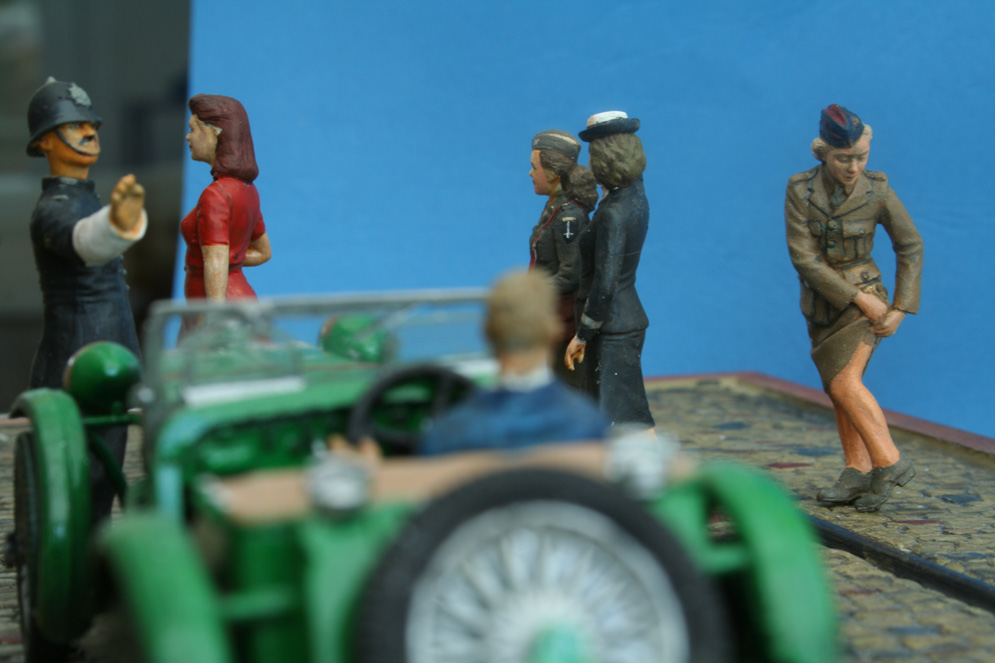 The driver’s view of the group captures detail of the Navy “blues”, the Army (SHEAF) insignia and the ATS (Royal Artillery Regiment) private purchase side cap. 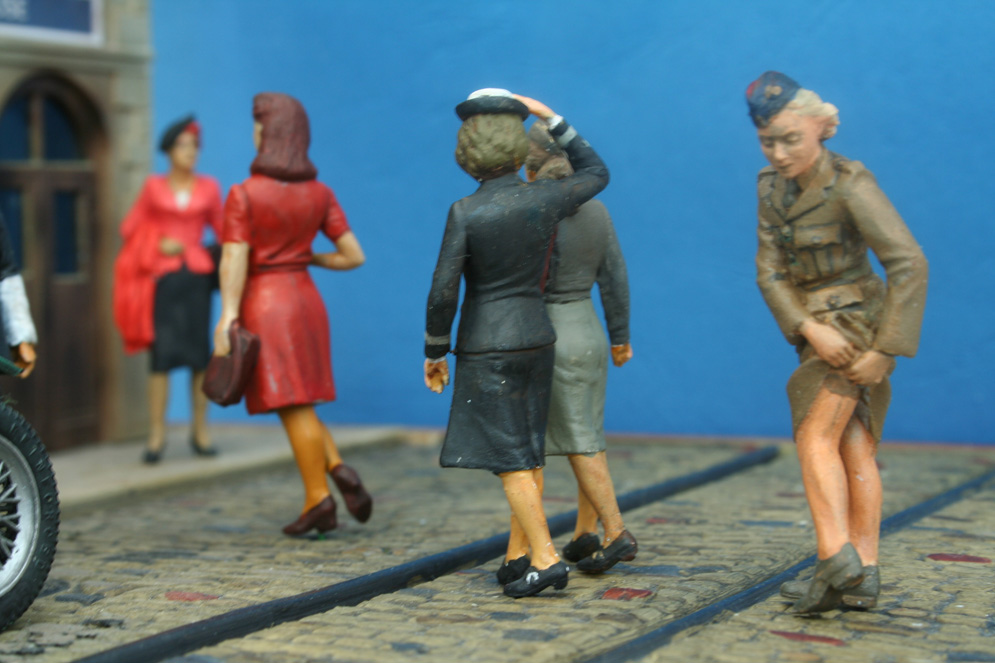 Placing the group in line emphasises their relationship to one another.

The cobblestones were painted in a mixture of greys and browns then dry brushed with a light earth colour to help blend them together. The tram tracks were painted matt black and highlighted by rubbing a pencil over their top edge where wear would occur.

The car is an Airfix kit of a 1932 MG Magnette and despite being nearly 40 years old has a good level of detail with open spokes wheels, the whole kit being a good fit and easy build. 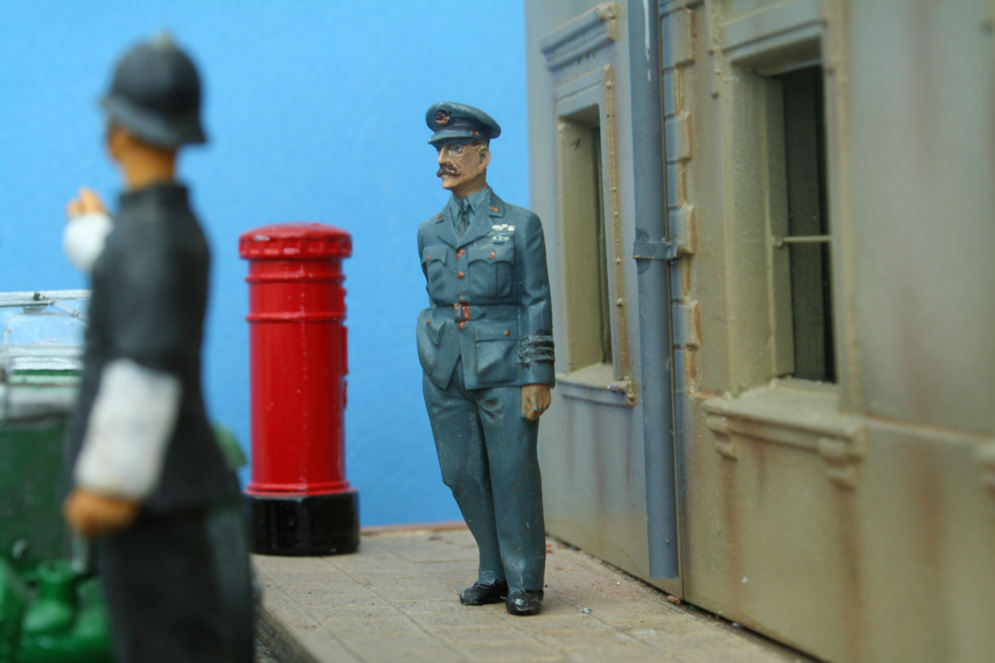 A close up of the pilot shows the quality typical of the Chota Sahib figures. The post box can clearly be seen and although a bit under-scale still fits the scene.

Preiser railway figures are always worth a look at as they often carry a good level of detail and cover civilian subjects. One of the key problems with the diorama is the height of the pub door! 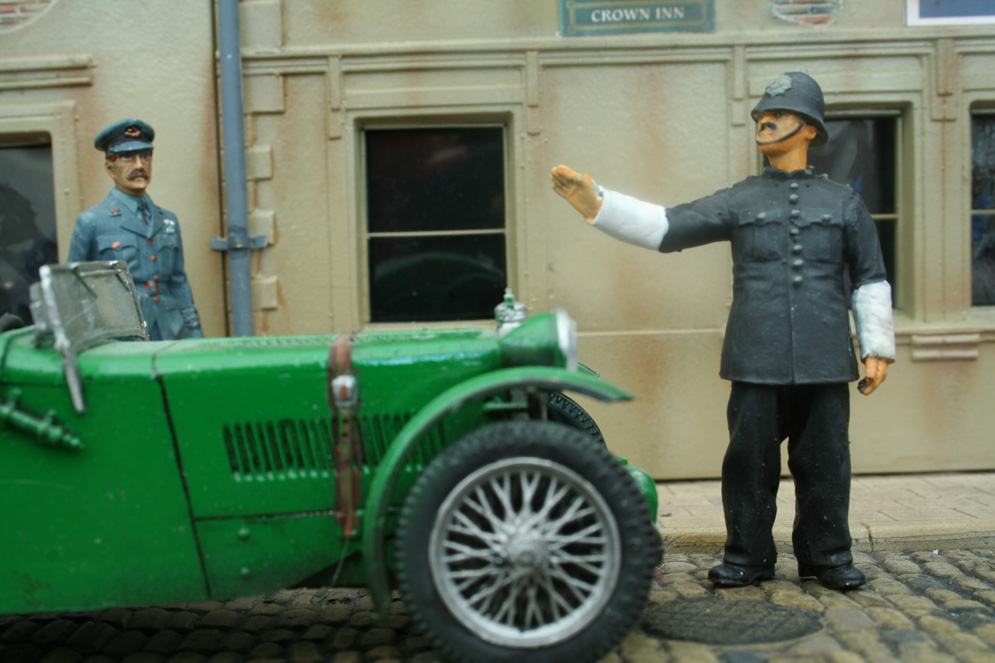 “Wee Friends” produce two policeman figures that are ideal for the period between 1900 and 1945. Detail and pose are well designed. The face of the Chota sahib pilot is that of an older (senior?) officer as seen here. 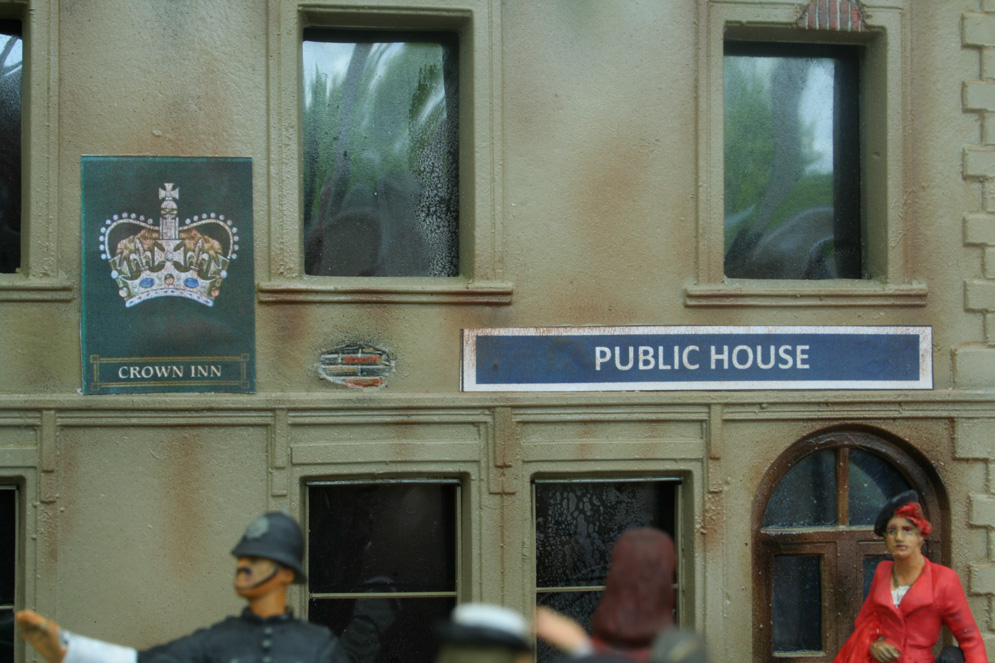 In setting the scene in dioramas it is useful to place details that identify the time period or location. Signs and street names are useful in doing this.

Note the variation in the brickwork and staining on the rendering in order to give the building some character. The drainpipe was made from a straw with brackets added from plastic strip. 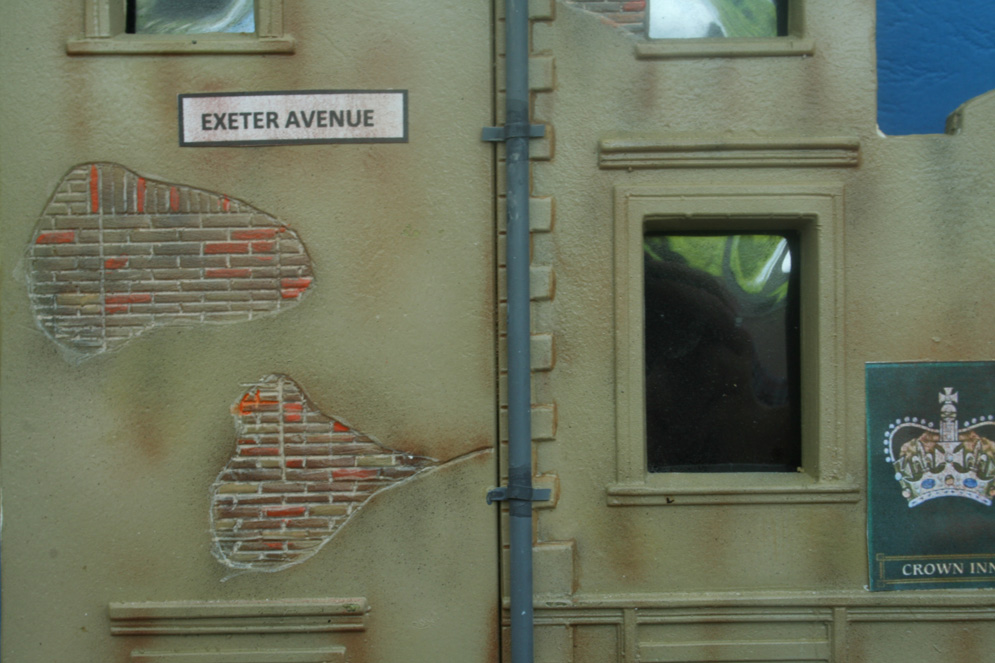 While the diorama is intended to have a light hearted feel to it, it was also designed to recognise the contribution made in the battle for freedom made by both civilians and military alike.