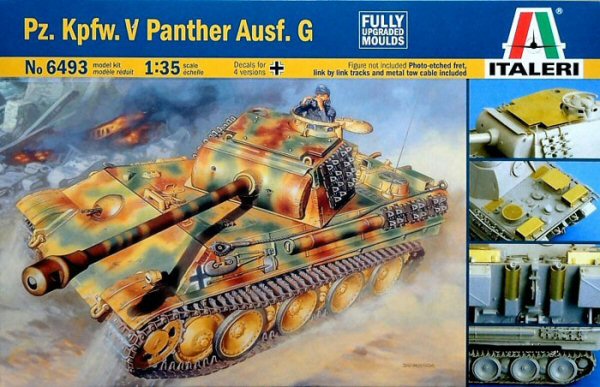 The Panther is arguably one of the best tanks of World War Two. It was produced as an answer to the Russian T34 and KV1 which outclassed the Panzer III and IV in both performance and armament The original Ausf D was rushed into production for the summer offensive in 1943 and was found to have teething problems.

The Ausf G was produced from March 1944 and was powered by a 690hp Maybach engine, armed with the KWK 42 L/70 75mm and two 7.92 MG34, with a crew of five. Improvements were made throughout the life of the vehicles and the Ausf G had the following, early production had zimmerit anti magnetic mine paste, a new designed cupola, a strengthened hull and improved protection for the gun as well as other items. The production run of the Ausf G was for 3,126 units produced by MAN, Daimler-Benz and MNH being used on all fronts.

I wanted a quick, straight from the box build and from the stash I thought this would fit the bill, so I could get back to some serious building. I had previously done an in box review for Scale Modelling Now and this was also another factor in deciding on this kit.

Stage 1 Starting with the lower hull side wall fillets are added as are bumper stops on the side wall and the drive sprocket housing rear hull plate, and the inner part of the sprockets and all went well with some clean-up of parts required. The other side of the hull is assembled in the same way.