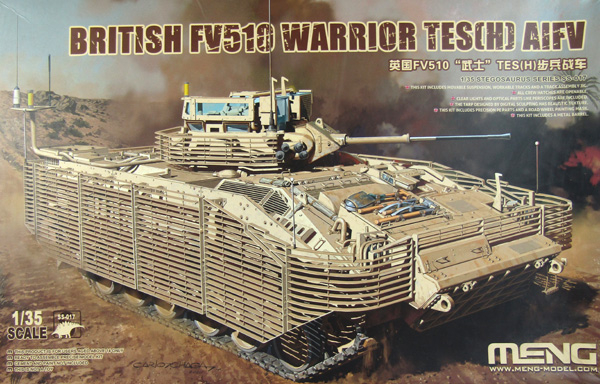 Introduction to the Warrior…

The Warrior tracked vehicle family is a series of British armoured vehicles, originally developed to replace the older FV430 series. The Warrior started life as the MCV-80, “Mechanised Combat Vehicle for the 1980s”. One of the requirements of the new vehicle was a top speed able to keep up with the projected new MBT, the MBT-80 – later cancelled and replaced by what became the Challenger 1 – which the then-current FV432 could not. The project was begun in 1972. GKN Defence won the production contract in 1984 and the Warrior was accepted for service with the British Army in November 1984. GKN Defence was purchased by BAE Systems, via Alvis plc.

A total of 789 FV510 and variants were manufactured for the British Army, and 254 of a modified version (Desert Warrior) were produced for the Kuwaiti Army.
The Warrior incorporates several design features in keeping with the UK’s battlefield experience. In particular, there are no firing ports in the hull, in line with British thinking that the role of the armoured personnel carrier/infantry fighting vehicle (APC/IFV) is to carry troops under protection to the objective and then give firepower support when they have disembarked. The absence of firing ports also allows additional appliqué armour to be fitted to the sides of the vehicle, which is invariably applied to Warriors involved in active operations. The cage armour used at one stage was replaced in 2007 by “Wrap Two” appliqué armour. The basic armour provides all-around protection against small arms ball ammunition.

The crew of a Warrior comprises the driver, seated in the front hull, and the gunner and commander, who are both seated in the turret. The embarked infantry section can number up to seven soldiers, who are seated facing each other in the rear hull compartment. Passenger access is through a pair of kidney shaped door and on later models a single electric ram powered door at the rear of the hull, rather than a drop-down ramp as in the US M113 APC and M2 Bradley IFV. Warrior Section Vehicles are able to carry and support seven fully equipped soldiers together with supplies and weapons, including a number of anti-tank weapons, for a 48-hour battlefield day in nuclear/biological/chemical conditions.

The Warrior is driven by a Perkins-Rolls-Royce V8 Condor engine through a four-speed automatic gearbox. It is capable of a road speed of 46 miles per hour (74 km/h). The Warrior has the speed and performance to keep up with a Challenger 2 main battle tank over the most difficult terrain.

The vehicle is fitted with a two-man GKN Sankey turret, armed with a non-stabilised L21A1 30 mm RARDEN cannon capable of destroying some APCs at a maximum range of 1,500 metres (1,600 yd), and an L94A1 EX-34 7.62 mm Hughes Helicopters coaxial chain gun. It is fitted with two clusters of four defensive grenade launchers (usually used with Visual and Infrared Screening Smoke – VIRSS).

All Warrior Infantry Section Vehicles are now equipped with Bowman radios, which replaced the earlier Clansman radios, for enhanced communications, command and control. When first introduced, the vehicles were fitted with passive image intensifier night vision sights. These have since been progressively replaced with Thales Optronics Battle Group Thermal Imaging (BGTI) sights to upgrade night fighting capabilities, with 8x magnification.

This is the principal version operated by the British Army, as described above. 489 were produced (including 105 as platforms for the mobility of ATGW teams, originally equipped with MILAN and later with Javelin).

FV511 Infantry Command Vehicle. 84 of these were produced.

FV512 Mechanised Combat Repair Vehicle.
Operated by REME detachments in Armoured Infantry battalions. It is equipped with a 6.5-tonne crane plus power tools and is able to tow a trailer carrying two Warrior power packs or one Challenger power pack. 105 of these were produced.

FV513 Mechanised Recovery Vehicle (Repair).
Also operated by REME detachments in Armoured Infantry battalions. It is equipped with a 20-tonne winch and 6.5-tonne crane plus power tools and (like the FV512) is able to tow a trailer carrying two Warrior power packs or one Challenger power pack. 39 of these were produced.

This is operated by the Royal Artillery as an Artillery Observation Post Vehicle (OPV) and is fitted with mast-mounted Man-packable Surveillance and Target Acquisition Radar (MSTAR) and Position and Azimuth Determining System (PADS), with Image Intensifying and Infra-Red equipment. The only armament is the 7.62 mm machine gun, as the 30 mm RARDEN cannon is replaced by a dummy weapon. This allows space for the targeting and surveillance equipment while still keeping largely the same outward appearance of a standard Warrior in order to avoid becoming a priority target. 52 of these were produced.
FV515 Battery Command Vehicle. This is operated by the Royal Artillery. 19 of these were produced.

This was an export version adapted for operations in hostile desert conditions. It was fitted with the Delco turret as used on the LAV-25 wheeled IFV, mounting a stabilised M242 Bushmaster 25 mm chain gun with coaxial 7.62 mm chain gun and 2 x Hughes TOW ATGM launchers (one mounted on each side). In 1993, Kuwait purchased 254 Desert Warrior vehicles.

During the Warrior lifecycle various Theatre Entry Standards (TES) were applied which enhanced both the fighting and defensive capabilities of the vehicles, dependent on the active threats in any given theatre of operations.