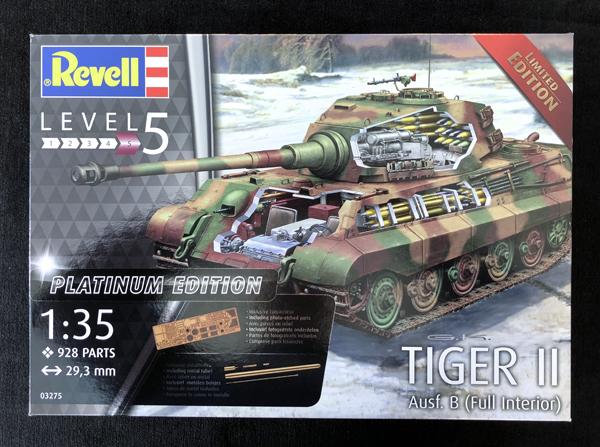 This Premium release kit from Revell is an interesting choice among the current surge in re-boxing offers that many model manufacturers are currently undertaking. Originally a 2017 ICM moulding, Revell has beefed this up with photo-etch and brass extras, including a barrel for the fearsome 88mm main gun, also included are the multi-part tracks.

The kit’s part count of 928 parts across the build is intimidating at first, but most of this is taken up by the tracks and 88mm shells. Before starting it’s important to think what type of model do you want to make? The reason being is that the upper hull is extremely difficult to remove once in place, as the front mudguards are easily fouled on the track.

So for this build I decided to go for an exploded look that would allow the details to be viewed, so I planned and built the kit into a range of distinct sections that would show off the interior. These were the lower hull and running gear, upper hull, main gun barrel, lower turret and upper turret. I also decided, apart from one key element, to build the kit entirely out of the box, sticking to painting guides along the way.

The kit itself went together fairly well, at times the instructions, which are beautifully designed visually, missed key elements such as part numbers and how parts fitted into one another. The other element missed was the track link count, which I located on the web. Taking a link as two parts there are 19 upper, 20 lower links with three wrapping around the rear idler and four around the front sprocket. The plastic of the tracks is a vinyl hybrid, whilst easily assembled in straight run, on the curves its struggles. Given the fiddly nature of their construction I was surprised that one piece vinyl tracks aren’t offered for those who want to use them.

Overall the interior is well appointed; all the key elements are there and make for an interesting model. However, one key set of missing components is the driver’s control panel and radio operator’s equipment. The turret is similarly sparse, with the main gun missing a couple of detailing parts, which given the price and wealth of PE is a little disappointing. That said I’m sure an enterprising individual is already working on it.

Overall the kit is beautifully moulded and relies more on the visible downward detail, rather than that hidden up in the body of the upper hull and turret. Do take a moment to check out Geoff’s Here Now in-box review.

Anyway, enough about the kit let’s look at the build. …