What a great little story Steve’s vignette tells, a feature of most of his work for sure. His contribution shows a scene that must have been encountered a number of times, especially early on in the conflict. Add to this the fact that he’s taken the very ageing Tamiya kit and re-worked it very well to create the fine model you see here. This is his story of “Rush Hour”… 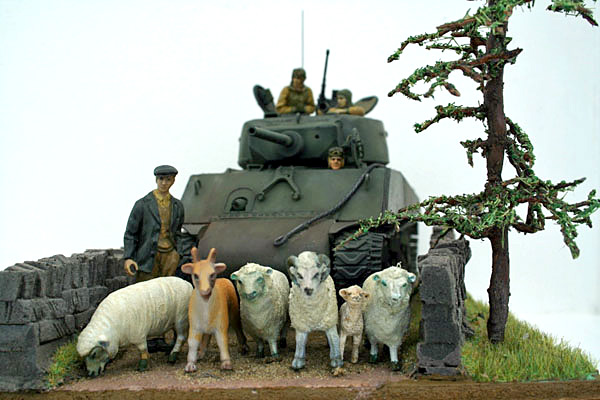 The Origins of the Sherman “Jumbo”

In order to provide a tank suitable for assaulting defensive emplacements, a new tank, the Pershing tank was due to be delivered prior to the invasion of Europe. Due to delays delivery of the tank failed to materialise.

Out of necessity, it was decided that a limited number (103) of upgraded Sherman tanks were to be produced. The upgrade specification included welding additional plates to the side and front plates doubling the thickness of armour. The transmission cover was redesigned and increased in thickness to 100mm with a more rounded profile. A new turret and gun mantlet was designed to provide the same level of protection. The tank retained the 75mm gun with minor modifications to engine, transmission and suspension which were put under strain by the additional weight.

Tamiya were the first to release a kit of the Sherman M4A3E2 (Jumbo) and it was the only mainstream kit available for several decades. It suffered from fundamental dimensional problems associated with the shape and size of the turret, the distinctive feature of the tank. The dimensions of the turret were too small in height, width and length with its sides sloping at too great an angle. 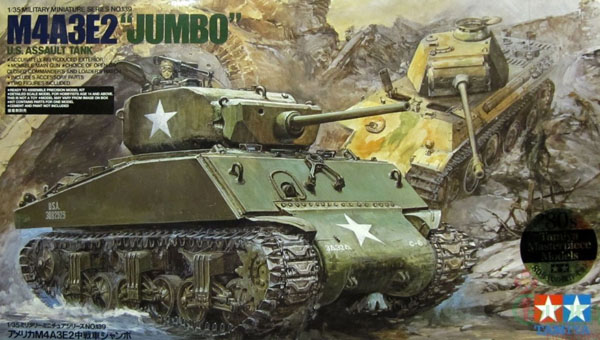