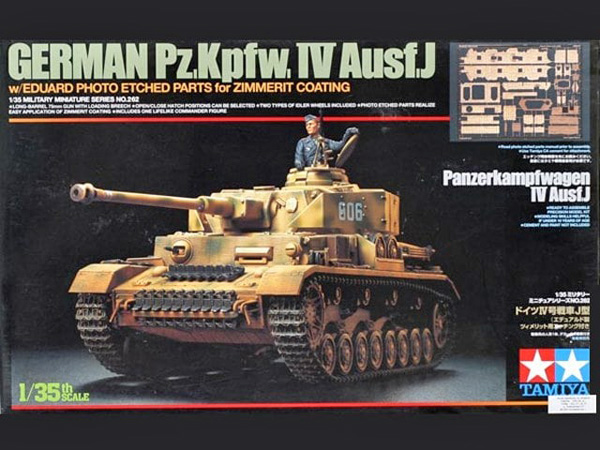 A note from Geoff C…
I thought you’d like to see how Marcin’s excellent project turned out – so here you are! 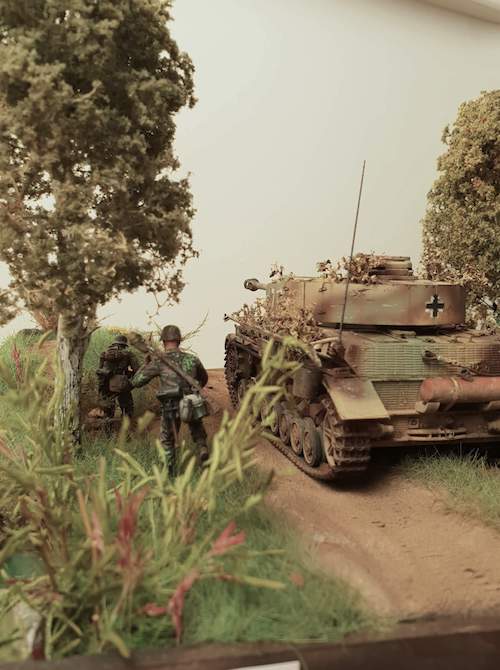 Over to you Marcin…

The model that I would like to present to you today is PzKpfw IV J in 1:35 scale by Tamiya in the version with zimmerit (Tamiya stickers), made specifically for this model.

The tank will be on a diorama together with 4 German soldiers of the 5th SS “Viking” SS Panzer Division.

Panzerkampfwagen IV (PzKpfw IV) – is a German medium tank from the period of World War II. Until the Fall of 1942, it was the heaviest armoured car serving in the army of the Third Reich. Initially, it was armed with a 75mm barrel gun, but under the influence of the experience gained from the Soviet T-34 and KW-1 tanks, it was rebuilt with long-barrel guns. For several months it was the best tank of the Axis countries and the only one that could make an equal fight with Allied AFVs. Despite the appearance of heavier machines PzKpfw V Panther and PzKpfw VI Tiger, it was never forced out of armoured divisions and until the end of the war and it was the basic German tank.

The Battle of Radzymin – was a part of a series of engagements between the Red Army and the 1st Army. The Panzer Corps that came to the fore of the Lublin-Brest Offensive between 1 and 10 August 1944 at the conclusion of Belorussian strategic offensive operation near the town of Radzymin in the vicinity of Warsaw, part of which entailed a large tank battle at Wolomin. It was the largest tank of the war in Poland during World War II. After August Russian reconnaissance units reached Warsaw in late July and on 1 August 1944 the Warsaw Uprising started.

Starting from an area south of Minsk Mazowiecki, Major General Nikolai Vedeneev’s 3rd Tank Corps (part of the Second Secondary Soviet Army) thrust northwest through Okuniew and Wolomin to Radzymin, reaching two miles (five kilometers) from the strategic bridge over the Narew River at Zegrze. In response to Vedeneev’s thrust, the Germans started a tactical counter-attack near Radzymin on 31 July. The offensive, carried out by 4 understrength Panzer divisions, was to secure the eastern tank and the second Tank Army in detail. Under the leadership of German Field Marshal Model, the 4th, 19th, Hermann Göring, and the 5th SS Panzer Divisions were inflected from August 31 and August 1944. Although the 3rd Tank Corps Gamely defended the initial assaults of the Hermann Göring and 19th Panzer Divisions, the arrival of the 4th Panzer and 5th SS Panzer Divisions spelled doom for the isolated and outnumbered unit.

Already on 1 August, the leading elements of the 19th and 3rd SS Panzer Divisions. Pressed into the area of Wolomin, the 3rd Tank Corps was pocketed and destroyed on August 3, 1944. Attempts to reach the tank by the 8th Guards Tank Corps and the 16th Tank Corps failed with the 8th Guards the attempt. Although Model had planned to attack the 8th Guards Tank, the withdrawal of the 19th and Hermann Göring Panzer Divisions to the German defences around the Magnuszew bridgehead. For unknown reasons, on August 2, 1944 all armies that were to assault Warsaw had their orders changed. The 28th, 47th and 65th Armies were ordered to the north of Wyszków and the Liwiec river line. The 2nd Tank Army was left in the place and had to fight the Germans alone, without support of the infantry. Also, 69th Army was ordered to stop while the 8th Guards Army under Vasily Chuikov was attacked by Garwolin.

Further combat lasted until 10 August, when the Germans finally withdrew. Soviet losses were heavy, thrash to the surroundings of Warsaw. The 3rd Tank Corps was destroyed, the 8th Guards Tank Corps took heavy losses, and the 16th Tank Corps took significant losses as well. Overall, the Second Tank. The army was in full swing. August 5, 1944.