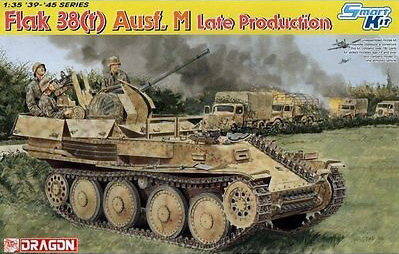 A note from Geoff C…
As you can see, Dai’s Flakpanzer has turned out really well… 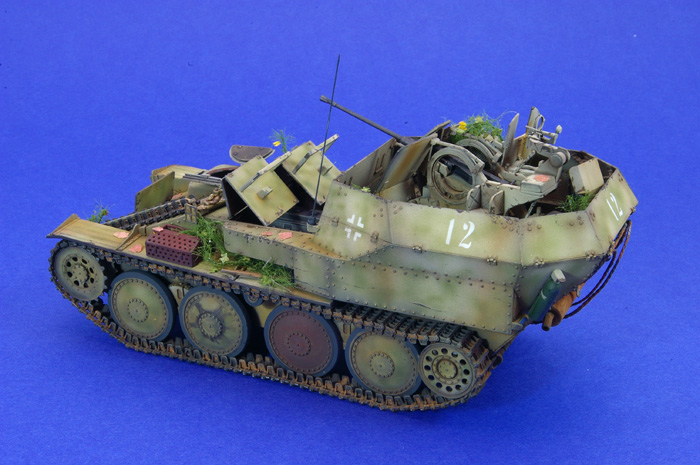 As the Second World War reached its later stages the German army faced the threat posed by increasing numbers of allied ground attack aircraft. To counter this threat, a mobile anti-aircraft gun was to be developed based on the chassis of the Pz.Kpfw IV tank using the powerful 3.7cm anti-aircraft gun. However, while this vehicle was being developed, the deteriorating war situation meant that a stop-gap would be urgently required in order to give some degree of protection to German armoured units.

A makeshift vehicle, designated the Sd.Kfz 140, was built around the tried and tested Czech 38(t) chassis. This carried a 2cm anti-aircraft gun in an open topped fighting compartment at the rear of the vehicle. The engine was mounted centrally in the same way as the Marder III. The gun had all-round traverse and the fighting compartment was provided with folding sides to allow the gun to engage ground targets and to provide space for the crew to operate.

Around 140 of these vehicles were produced and in January / February 1944 they were issued to the anti-aircraft platoons attached to tank regiments. While it fulfilled a much needed role, the Sd.Kfz 140 suffered from a lack of firepower and the open topped fighting compartment gave little protection to the unfortunate crew.

This Flakpanzer has appeared in kit form a few times, with examples being released by DML, Alan Hobbies, Tristar (I think that the Tristar moulds are now available from Hobby Boss) and Italeri.

The original DML kit appeared in 2007 with the version used for this project appearing a couple of years later.

The kit is a typical complex DML offering with sprues taken from several of their other kits of vehicles based on the Czech 38(t) chassis. Because of this there were a large number of left-over parts, so the project did not involve quite the terrifying number of parts as it first seemed when opening the box!

The kit provides DML’s ‘Magic Tracks’ which I think are far better than the soft DS tracks included in some of their more recent kits. The links are all separate with no need to cut them from a sprue. There is no clean-up required and they fit together perfectly.

There is a basic interior for the driver’s compartment including a seat and very well moulded transmission and steering gear. The engine, radiator and fuel tanks are provided for the central engine compartment.

DML provides sprues from its 2cm Flak 38 kit for the main armament (even more left-overs for the spares box here). There are also radios, ammunition boxes and some crew equipment such as MP40 machine pistols and gas mask canisters to detail the fighting compartment.

The instructions seemed to me to be (mercifully) free of the errors and omissions that can sometimes be found in DML kits. However, I used them as a guide to part placement rather than as a workable construction sequence as DML seems to insist on attaching small detail parts to the model before the larger structural elements are brought together which I do not think is a good idea.

A brass fret is supplied for some of the smaller items such as tool clamps and ventilation grilles. There are no plastic alternatives for these parts.

A brass fret is also supplied for some parts for the gun shield. Fortunately for those like me who don’t like working with etched parts there are plastic alternatives for some of these.

A length of metal wire is provided for the tow cable.

Markings are provided for five vehicles.

I found that a useful reference for this project was the ‘Nuts & Bolts’ publication on the Marder III (number 17 in the series). The Flakpanzer and the Marder were based on the same modified Czech 38(t) chassis and so I thought that much of the detail such as the interior of the driver’s compartment would be the same.