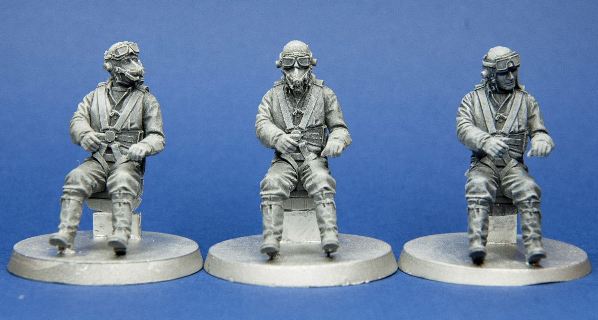 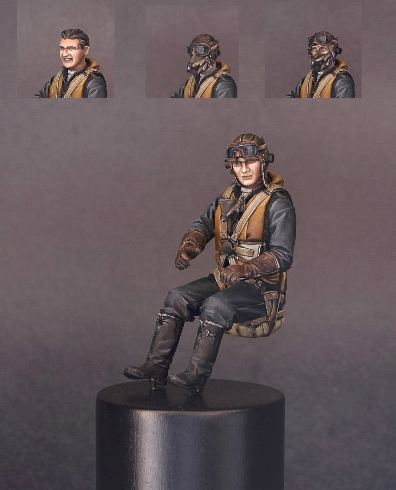 RAF 01. Modelled on a photograph of Sailor Malan as Wing Leader at Biggin Hill in 1941, Mike Good’s seated mid-late war RAF fighter pilot, designed primarily for the Tamiya Spitfires but able to fit most fighter cockpits including the MDC Typhoon, the Aires cockpits for Spitfires, the Radu Brinzan cockpit for Hurricane and many authentic models with reasonable cockpits.

The four heads offer a choice of face-masked pilots goggles up and goggles down, and unmasked pilot with facemask aside (Sailor Malan), and a bareheaded pilot (Johnnie Johnson). A word of advice to the modeller. With 14 parts in total, he is designed for the Tamiya Spitfires with his seat parachute left off to be the right height under the canopy. With all models, the golden rule applies, especially with cockpit figures: test fit him to check heights in the cockpit before deciding whether or not to attach the seat parachute. The classic problem with seated cockpit figures is that they sit in a tighter space than they would have been in the original full scale aircraft. Whilst the outer dimensions of the model are usually pretty accurate, the inner dimensions and the cockpit are distorted by the thickness of the plastic, and generally 6 to 9 inches tighter than the original space. The replacement rudder pedals were made by Mike to replace the Tamiya Spitfire kit parts and to properly accommodate the pilot’s boots. On the face-masked pilots if you choose one of them, I also recommend you attach the oxygen hose to the mask before joining the head to the body. I didn’t the first time. 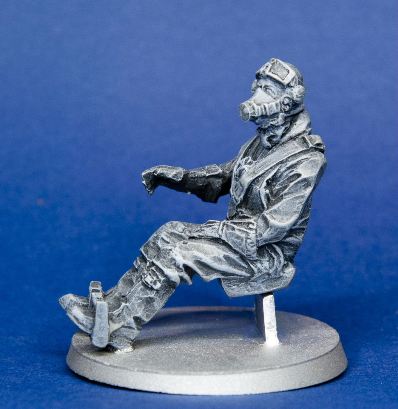 RAF 02. Modelled on a photograph of Al Deere in the cockpit, Andrew Cairns’ seated mid-late war RAF fighter pilot is designed for the Tamiya Spitfires. There is a choice of three heads, one masked goggles up, two open goggles up with a facemask and hose supplied as separate parts. This figure is less adaptable than the Mike Good seated figure. 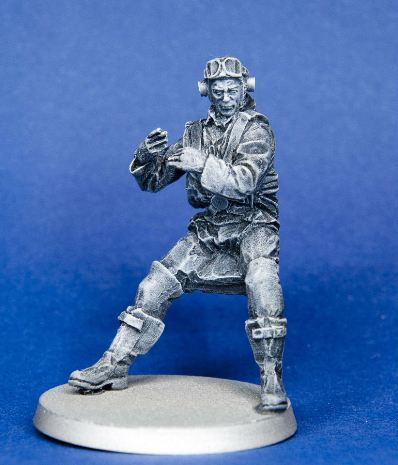 RAF 03. Modelled on a photograph of Sailor Malan in 1944 climbing out of his Spitfire, Andrew Cairns’ RAF fighter pilot is designed for the Tamiya Spitfires and will fit most Spitfire models with flap doors you can model open. The choice of heads is between a bareheaded pilot, or helmeted and goggled, with mask and hose supplied as separate parts.

RAF 05. Conceived by Alan Ball, this early war RAF fighter pilot climbing out of the cockpit is designed for the Revell Classics Hurricane Mark I, and for the Pacific Coast Models’ Hurricane Mark I. Wearing an Irvin jacket, Mae West and seat parachute, the figure comes with a choice of three heads: face-masked pilots goggles up and down, and an unmasked pilot in helmet and goggles with mask and hose supplied as separate parts.

RAF 06A and 06B. The RAF 1940 set. Conceived by Stephen Warrilow as a series of Battle of Britain figures, these early war RAF fighter pilots are respectively scrambling in seat parachute, and dozing in full gear in an armchair. Both figures offer a choice of two heads. Further figures are intended for this range.

RAF 07. Modelled on a photograph of Ginger Lacey in 1940 receiving a gift parachute, Andrew Cairns’ early war RAF fighter pilot, this standing figure comes with a choice of two heads – Ginger Lacey, and a pilot with a handlebar moustache, which can be stood beside any early war aeroplane.

LUFT 06A, 06B, 06C and 06D. The Luftwaffe 1940 set. Modelled on 1940 photographs for both figures, Nino Pizzichemi’s ace and showman Helmut Wick restages a dogfight with his hands for Generalfeldmarschall Hugo Sperrle. Hugo Sperrle’s monocle is beautifully rendered, and the Wick figure comes with a choice of two heads in flying helmet or Luftwaffe side cap. The Luftwaffe 1940 group sculpted by Nino Pizzichemi will eventually be a ‘mix-and-match’ selection of several figures, Wick and Sperrle above now joined by Adolf Galland in his captured Irvin trousers looking relaxed with eponymous cigar and a Marlene Dietrich figure, the embodiment of Lili Marlene, leaning against the fuselage of an aeroplane (or sports or staff car!). These models should appeal to diorama lovers, figure painters and collectors as well as aero modellers who like using figures.

VVS 01A and 01B. Modelled on a photograph of VVS pilot Lilya Litviak standing on the wing of her Yak fighter and of VVS gunner T.F. Konstantinova standing on the wing of a Shturmovik, Nino Pizzichemi’s Soviet women aircrew will pose on most models, and were specifically designed for the Hobby Boss Shturmovik. The pilot figure has a second head for the celebrated Shturmovik pilot Anna Egorova. Further figures will follow in this group as a ‘mix and match’ selection of VVS aircrew. VVS 04. Modelled on a photograph of a Soviet armourer holding ‘A bomb for Hitler’ painted on the bomb, Andrew Cairns’ figure and FAB 50 bomb comes with a choice of two heads following the original photograph and an alternative Soviet Realist head by Bob Naismith in the heroic style. Designed to accompany the Hobby Boss Shturmovik and any appropriate VVS model.
USAAF 04. Modelled on a photograph of Lauren Bacall, Bob Naismith’s ‘American Beauty’ may be leant elegantly against any 1/32 fighter, bomber or sports car of your choice. Excellent practice for drybrushing… 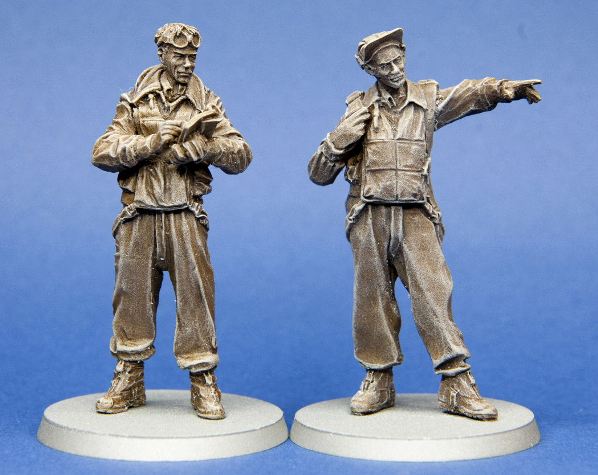 USAAF 01. Modelled on a photograph of Major Harold Stouse in 1942 with a companion figure devised by Andrew, this two figure set by Andrew Cairns of USAAF bomber pilots can be posed alongside any US bomber, and were devised with the HK Models’ Mitchell B-25 in mind. There are three interchangeable heads between the two figures: bareheaded (as photo of Stouse with clipboard), with the fur lined baseball cap, and with the standard fifty-mission crush peaked cap.

This range of figures is simply superb. They are that good that when you see them in the flesh, so to speak, that you will want to go out and buy a kit to go with the figure (or figures) that you have purchased just so you can display them properly. Talking of where you can see them, they can be seen at the Model Design Construction (MDC) stand at any of the shows that they attend throughout the country.

If you like to have a figure to go with you model and you want to really bring it to life have a look at these as I can’t recommend them highly enough and you will see them make several appearances in the near future in many of my builds and those of some of the other reviewers.