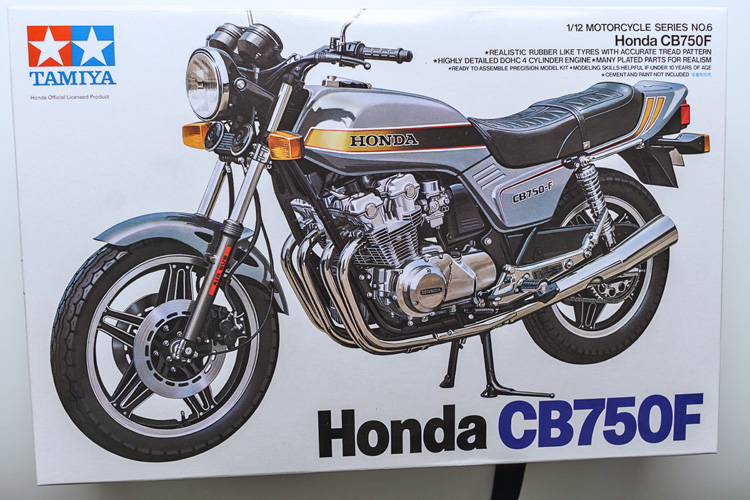 Back in the 1970s, Honda virtually revolutionised street motorcycle design by introducing the four cylinder, four carburettor 748cc double overhead cam all alloy engine. This was at the time that the British motorcycle industry were still turning out twin cylinder 650cc heavy engined bikes that had developed but not changed that much in two decades.

Not only did Honda introduce what would become the blueprint for future design by just about everyone, they did it with style. No longer the pressed steel frames of their smaller bikes, they went with the traditional, and best, frame design using welded steel tubing giving a frame that could carry and handle the power of the new engine giving a safe and comfortable ride. They made many improvements on the CB750 range but, for me, the best and most stylish was the K series with it’s four upswept silencers. I was very happy to own a 500cc version of the K which was the best bike I ever owned.

Back to the kit…

Tamiya make some amazingly well engineered motorcycle kits some of which can be a bit pricey but this lovely kit can be had for £13 or even less, I paid just over £12 for mine from www.scalemodelshop.co.uk.

The kit comes on 6 sprues, two black, one white one silver, one chrome and one clear. It also comes with two superbly moulded ‘rubber’ tyres with good tread detail and no centre seam line to get rid of. Also included are some screws which act as axles and swinging arm pivot points and a length of vinyl tube for the control lines etc. This basic vinyl tube is seen as a bit basic now and braided tube can be bought to replace it as can clear for fuel lines but I think the plain vinyl works OK. 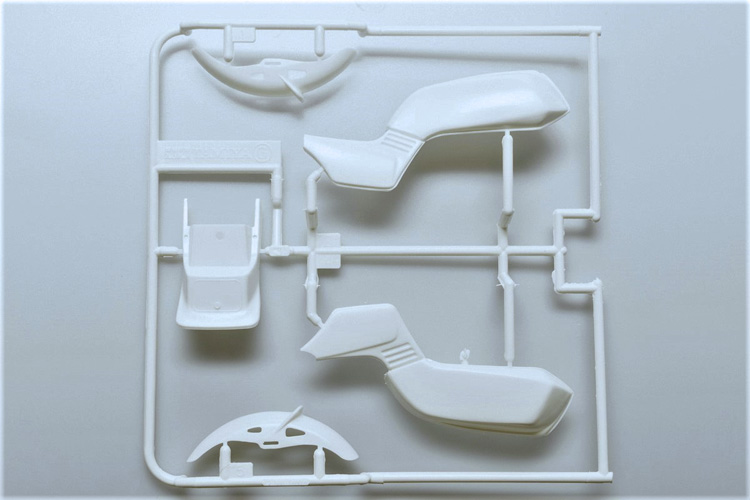 The white sprue consists of the fuel tank and integral side panels. Although plain, they replicate the real thing accurately. The only possible issue with these parts, and the front mudguard, is the seam line that will run the length of the parts. If there is a gap at all, it will need careful filling, sanding and polishing as the finish on these parts is important as they are focal points. The other main white part is the rear seat fairing which is a single part so should have no issues. 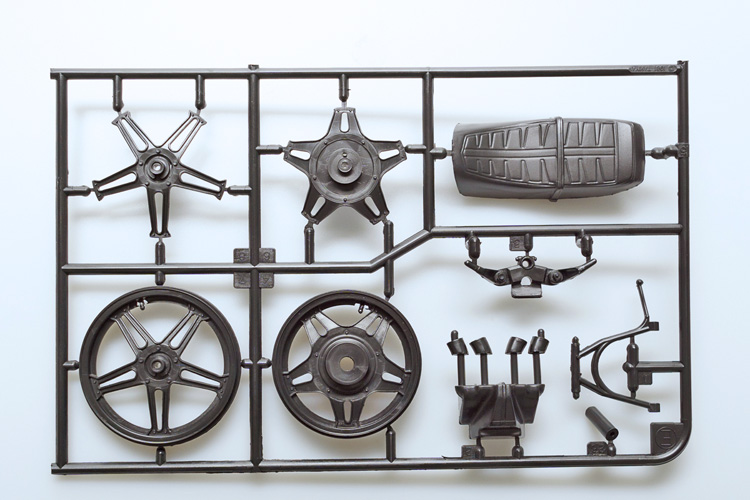 The smallest black sprue has the wheels with one side of the ‘spokes’ integral to the full rim. The other side’s spokes are separate parts which may help with painting. Also on this sprue is the very nicely detailed and moulded seat in one piece. The top head yoke, air box and centre stand completes the sprue. 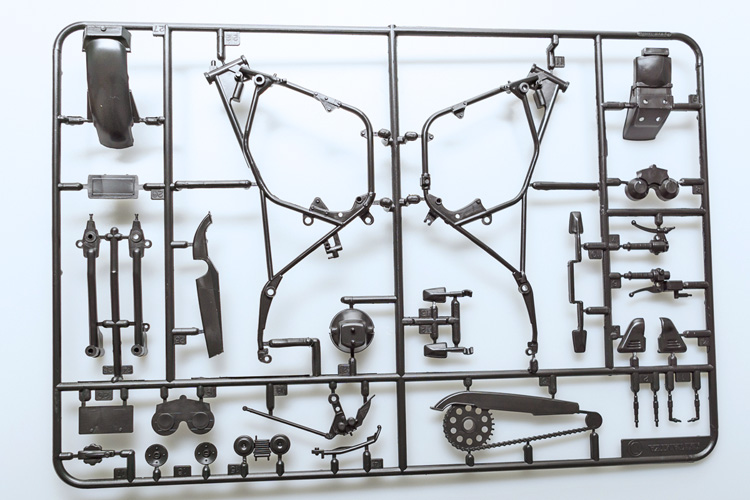 The larger black sprue has the frame parts, thankfully virtually bur free so should be easy to clean up. Quite a few small parts are on this sprue including the two parts of the swinging arm and the integral chain and chain guard. This is a simplified part being all in one, usually the chain is a separate component. However it is very nicely done 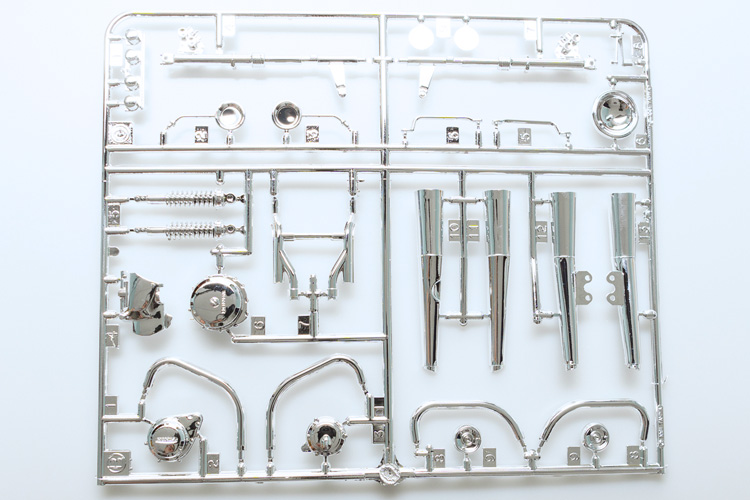 The chrome sprue carries the exhaust system, rear exposed spring shock absorbers, engine covers and front forks amongst other parts. The chrome is very high quality but for me, it has to come off. 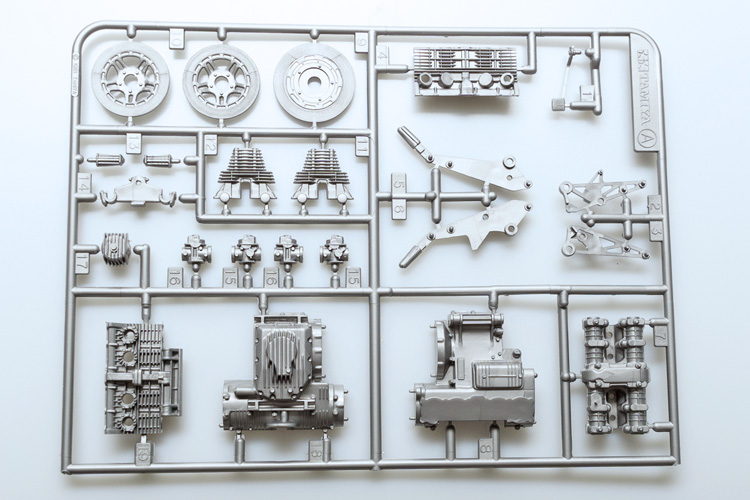 The medium silver sprue has all the main engine castings including the crankcase with integral gear box as well as the parts that make up the bank of four cylinders and head. These would normally be painted a dull aluminium, not a polished finish. The twin front and single rear brake disks are also on here as are the four carburettors. 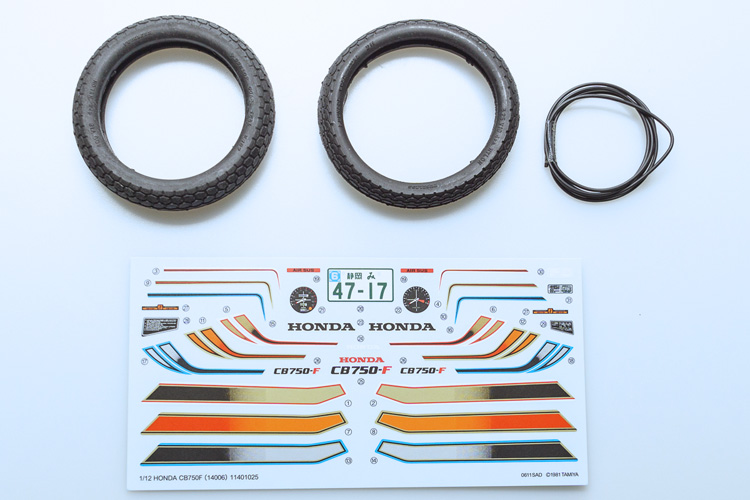 Decals…
The decals look good, the usual Tamiya thicker type but they should be OK. The fuel tank flashes are in three different colours to suit either the silver, black or red body colour. Speedometer and rev counter decals look the part. The ‘Rubber’ tyres look good with a great tread pattern and have the ‘Dunlop’ logo and tyre size moulded clearly on the side walls.


The instructions come on a multi-fold single sheet printed double sided. Six ‘pages’ cover the 15 main construction stages quite clearly but, very helpfully, include photographs of the completed sections. They also include a full sprue map and painting, decaling instructions.

Clear parts…
Un-pictured, sorry I missed it, is the clear sprue which has the indicators, rear light and headlight lens. These look well detailed and clear. I prefer to paint these from the inside with Tamiya clear paint to get the red and orange.

This is a very affordable kit to obtain a full 1:12 scale bike. To achieve that, there has been some simplification but not much and is very well done. Nothing at this stage leads me to think this is not going to build into a great model. It should be a fairly quick build as I will soon be finding out.