Welcome to the Subscribers’ Armour Gallery M
Each submission has a ‘gallery’ of thumbnails which you can click on to see an enlarged image along with some short text describing the model – enjoy!

LATEST: Marder I by Dai Williams
This vehicle was developed in response to the Russian medium and heavy tanks encountered during the early stages of operation Barbarossa. The vehicle was designed in 1942 by Major Alfred Becker who had been tasked with finding ways of providing much needed mobile anti-tank weapons using the many captured vehicles at the Wehrmacht’s disposal.
The vehicle was based around the French Lorraine tractor chassis. It had an open topped fighting compartment which provided the crew with some protection from small arms fire and shell splinters. The vehicles were deployed on the Eastern Front and were used until 1944.
The kit is a typical high quality Tamiya product with the parts fitting perfectly. There are link and length tracks provided, and an interesting feature of the kit is that the entire front portion of the suspension complete with springs is moulded as a single piece. This made assembly of this potentially complex area very easy indeed.
There are shells provided in the kit for the ammunition rack in the interior of the vehicle. As the vehicle was so small, there was rather limited space for ammunition stowage and wartime photos often show the Marder towing an ammunition trailer which, if you decided to include one, would have to be obtained from another source.
Two figures are provided, and I thought that these were rather good – though as ever my questionable figure painting skills failed to do them justice!
The model was finished using Tamiya paints. After a coat of acrylic gloss varnish, I applied some markings from an Archer’s Dry-Rub sheet. The transfers provided in the kit look very good and include an interesting variant of the usual black and white German national marking. However, I decided that using dry-rub transfers would remove any chance of the dreaded silvering of the backing film associated with waterslide transfers that often causes me headaches.
The weathering was done with oil paints rather than my usual pastels as I feared that using pastels around the multitude of rivets on the kit would darken the finish too much. I think that open topped vehicles benefit from a little clutter and so I filled the interior with some likely looking items from my spares box.
All in all I think that this is a great kit and I enjoyed building it.
…… I just wish I had the remotest, tiniest, weeniest idea how to paint figures without them looking as if they belonged in a zombie movie.
Dai W.
LATEST: M13 40 by Davide Montaldo
Tamiya M13/40 – 1:35 Scale

After having seen an extensive number of videos ..but also my stash building up to dangerous levels, I decided to get on with it and tried to build something. I therefore picked this kit in its original 1974 version and to go with a straight out of the box build.

Being really the first model, I tried all techniques for the first time… pre-shading, using black base colour with white highlighting of the panels both from Tamiya acrylic range. Then I applied the base colour (Dark Yellow XF-60 from Tamiya) and for the camo pattern a mixture of Dark Green and Field Grey still from Tamiya.

The camo was particularly challenging since it took me a lot of time to set my Harder and Steenbeck Ultra to the right parameters and did experience a number of splattering episodes, which had to be corrected afterwards with the XF-60. I then went on applying filters from AK, to make that camo pattern better blend-in and then went on with pin washes and pigment applications from both AK and MIG.

Tracks are of the vinyl type which were also painted with NATO Black from Tamiya and subsequently weathered with washes and pigments, prior to a coat of Semi-gloss varnish from Mr. Hobby.

The diorama was made using the desert sand mixture from AK, with gravel from model railways and the rock is a converted piece of cork taken out from my back garden.

Stretched sprue was used for the antenna.

M1A2 SEP TUSK II in Iraq by Miki Shimizu
Here is my latest model made from the Tamiya 1:35 scale kit; hope you all like it! Miki S.
M3 Grant by Mark Rooks
This is Takom’s 1:35 M3 Grant tank.

The build was straightforward enough although it did require a little fettling on a couple of panels. Whilst at Scale Model World 2018 I visited the Resicast stand and picked up their resin stowage for this kit. As a bonus they included a replacement main gun with a protective canvas cover so often used by British Grants in the North African desert.

The fit of the barrel was pretty good, with just a little piece of plastic strip being used to fill a small gap above the canvas cover. The figure is from Ultracast and is full of character just needing some twisted lead wire for the microphone and headset.

The base is from Just-Bases with ground work made from indoor Polyfiller and painted with acrylics. This was then covered with “Battle Zone Desert Scatter” from Javis “Countryside” Scenics secured with PVA Glue with tufts of grass from the same company. A dusting of Pinnacle Desert Sand weathering pigment tied it all together. The sign is made from strips of Balsa painted black with 4mm Letraset dry transfer lettering and is an example of Allied Gallows Humour.

This project was a commission build for someone who has a real Stuart tank (as you do, G!). Most of the features of the real tank can be seen in this model. Like the name and numbers.
Paint: Tamiya
Weathering: Oils

M31ARV by Martin Visser
Here’s another great build from Martin and his project to build the M31ARV built from the Tamiya 1:35 scale kit.
M35 Mittlere Panzerwagen (ADGZ-Daimler) By Dai Williams
This model is the Hobby Boss 1:35 M35 Mittlere Panzerwagen (ADGZ-Daimler). The model was built (more or less) from the box.
The kit offers the modeller the option of opening the access doors, the turret hatches and ventilation louvres. No interior parts are included though and if any of these items are open the empty spaces in the interior will be very obvious
The kit provides ten vinyl tyres. I find that the problem with vinyl is that it does not take paint well and it can sometimes flake off. Here I used Alclad’s Black Primer as a base coat which seems to have stayed where I put it – for now.
There are two options for painting. One is overall early-war dark grey and the other is the same colour with a camouflage pattern of red / brown. I chose the former scheme. Tamiya Nato Black (XF69) was used as a base coat with patchy over-sprays of progressively lighter greys on top of this. I started with Dark Sea Grey (XF54) adding a little dark blue and ending with Medium Sea Grey (XF83).
I did not use the kit transfers, replacing them with some old dry-rub transfers to avoid having to apply a gloss varnish.
The weathering was limited to a little chipping using Vallejo German Camouflage Black Brown applied with a piece of torn sponge. Some dust was applied using pastels from the Pan Pastels range augmented with some light over-sprays of Flat Earth (XF52) and Buff (XF55) on the lower half of the model.
M-36 Jackson tank destroyer by Roger Brown
Academy 1:35 M-36 Jackson tank destroyer…

The M-36 was developed to replace the M-10 tank destroyer which was becoming obsolete as its 3-inch gun had difficulty engaging Panthers and Tigers. The new turret with its 90mm gun was mounted on the M-10 chassis and designated Motor Gun Carriage M36.
These tank destroyers took part in the Battle of the Bulge during the winter of 1945.
All the very best, Roger B.

All the very best, Roger

M4A3E8 by Martin Visser
Here’s my Dragon 1:35 M4A3E8 – hope you like it.
It’s finished in much the same way as other entries you’ll find in the SMN Subscribers’ Gallery.

M4A4 easy 8 Sherman by Malcolm Ireson
Here are a few more from my Sherman collection – this is the DML easy 8 M4A4 Sherman, sometimes called the ultimate Sherman as it had the big gun and add-on armour and the new VVSS suspension units.
The crew were made from various bits from the spares box and the stowage is homemade from the spares box too.
M4A1 (76mm)W Sherman by Dennis Deagle

Dragon 1:35 scale Kit No. 6083, “Operation Cobra”
I bought this kit on impulse (a birthday treat for me!) and because I wanted to do a straightforward build out of the box, without having to bother with kit corrections and improvements. Which, as I recall, is what I did and was very satisfied with the build process?
Aftermarket products are limited to MV lenses for the headlights and some of the accoutrements loaded on the engine deck. The figures are the old Dragon US Tankers, two having Hornet heads as I recall. The air recognition panel is wine bottle lead foil with Model Master Enamel # 1775, Fluorescent Red. Kit tracks were used as were kit decals for the markings with the exception of the stars for which a metal stencil was used.
Finishing and weathering followed the method outlined by Steve Zaloga in his Osprey publication “Modeling US Armor of World War 2”. I heartily endorse the method; it is not complex, relatively quick and results in a very presentable model.
The model took a Gold in its class and won the award for the Best American Military Subject at the Alberta AFV Model Show in 2010 (there were not a lot of entries in the class, to be honest)
Thanks for looking.

Here’s some pictures of my latest completed armor model. The model is DML’s M4 Composite Hull PTO in 1:35th scale. The kit comes with both the high and low Bustle turrets. I wanted to do a low Bustle version. The kit version has both the loaders hatch, the pistol port, and the smoke discharge tube. None of which are on the version that I wanted to model.
The conversion was fairly straightforward and rather simple. I sanded off all the detail on the loader’s hatch, and then glued it in place. The pistol port required cutting the raised wielded fairly to the turret away, then gluing the pistol hatch closed. I plugged the smoke port with sprue cut down to fit. All three areas were puttied with Squadron White putty, and then sanded smooth. To duplicate the cast surface I applied Tamiya Gray primer with the end of a wide stiff brush using plenty of primer. You can see the results in the one close up.
I painted the M4 with Tamiya gray primer, then a mix of Tamiya FX-62 Olive Drab and Tamiya FX-60 Dark Yellow. I have two different shades of this mix for color modulation and shading. Weathering was done with Dark Earth AK Interactive Wash, and various homemade filters. Then a final wash of Tamiya XF-57 buff for an overall dusty effect that also helped to blend in all the various shades.
Joel Willstein 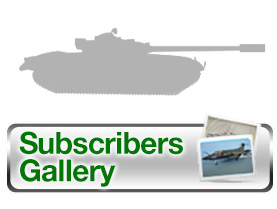