So pleased to be starting this build of the classic Airfix de Havilland Heron kit. I built it many years ago when it was released with Shell Oil livery and very smart it looked too! It was fun then and I loved the look of the aircraft then and on a recent visit to Newark Air Museum here in the UK, that interest reignited seeing their example. With the re-release (again) of the kit in Jersey Airlines livery, well, it just has to be built :)

Another reason for building this kit now of course is that it won our recent SMN poll to be my next build so that’s great too!

The re-released kit is quite basic as you’d imagine for a kit first released back in 1959! Having said that, it’s a great canvas to apply today’s skills and experience and that’s a main motivation for taking it on. So many older kits are disregarded and you can learn a lot by having a go at any number of these older kits. Last year I took on the old Airfix Bristol Superfreighter and loved that build, so here’s another opportunity to have a go and make the most of an Airfix Classic! 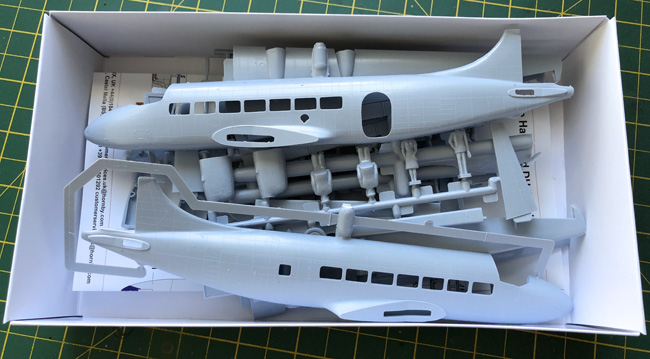 I definitely want to finish it in that box art showing an aircraft from Jersey Airlines. Having had several family holidays on the Island when I was a boy, admittedly in the 1970s (we flew in on a BUA BAC One-Eleven – unbelievable braking on their short runway – the noise!!!) more nostalgia flows into this build :)

I want to use as much of the kit as I can and that means adding some detail in the cockpit as it looks like you might be able to see at least some of the interior. In addition, the big rectangular windows should reveal some of the interior and that means the seats near the windows. The clear parts aren’t bad and so it’s worth adding some seats I think. As no cabin floor is included in the kit, nor seats for that matter (other than pilot and first officer), I’ll have to make some up – should be fun!