A note from Geoff C…
It’s a real pleasure to welcome Roger H to SMN and to be able to bring you his very nice looking de Havilland Comet 4C in Royal Air Force Transport Command markings. What’s even better is that Roger’s Comet is in 1:72 scale giving it some presence for sure!

Although we don’t have too many build photos this excellent piece from Roger will give you a good heads-up on what to expect from a manufacturer that is likely to be new to many of you. 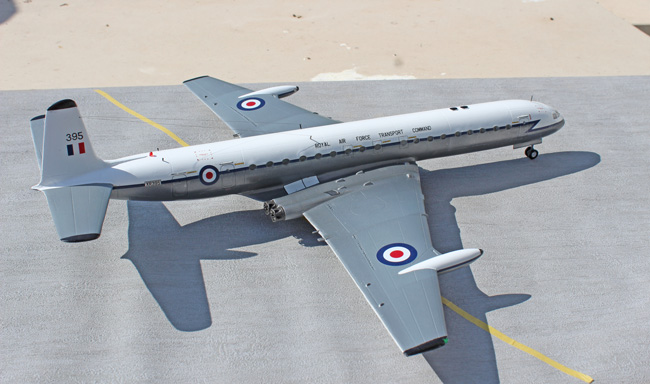 Very impressive, I’m sure you’ll agree?
Over to you Roger…

When I started modelling way back around 1960, Airfix ruled supreme, at least in the UK. As the years went by standards improved until today we have new kits that are pretty well perfect in every respect. Fantastic! However, that’s great if you want endless Spitfires, Mustangs, Me109s and Phantoms but some of us tire of the same old stuff and hanker after something more unusual that’s not provided by the mainstream. That’s where the cottage industry comes in. They’re mostly run by enthusiasts for other enthusiasts and provide vacform and resin kits of esoteric subjects. There are very few that do injection-moulded kits but the French company Mach 2 is one of them. If you’re used to the extra work needed by most vacform and resin kits these will come as no surprise but don’t expect modern Airfix quality; they have been described as ‘agricultural’. However, DO expect unusual subjects that you’ll never get from Airfix. Oh, and you can expect them to be pretty accurate because they’ve been mastered by modellers who know their subjects. Apparently the masters and moulds are all made by hand. Respect!

They are produced in ‘soft’ moulds and injected under relatively low pressure so the moulding gates are large and small parts are rather clumpy and need lots of cleaning up. As the moulds get older they need repairing and you see the evidence here and there. The external surfaces are nicely detailed with recessed panel lines though the detail is a little soft. The thickness of the plastic is variable and far thicker than you are used to. Also, the thickness is not uniform or symmetrical which makes even joining fuselage halves together a process that needs some care. There are no locating pins anywhere, of course.

The plastic is softer than normal polystyrene so is easy to work. The difficulty comes from the internal surfaces. There are literally hundreds of ejector pin blemishes that you rarely notice on mainstream kits. These cause a problem in areas where the two parts need to come together closely, such as trailing edges of wings and tails or in areas where you want nice internal details such as cockpits. Mostly they have to be removed and I use side-cutters for this then clean up the scar with a Dremel. Did I mention that you’ll need a Dremel? Well…..you’ll need a Dremel. If you don’t have one go and get one now!