Here’s a summary of the products I’ve used in this build:

A note from Geoff…
Ok, I just had to show you a couple of photos up front of Ashley’s impressive Phantom FG.Mk.1. I just love the simplicity of it – just excellent and makes you want to go out and buy it now! 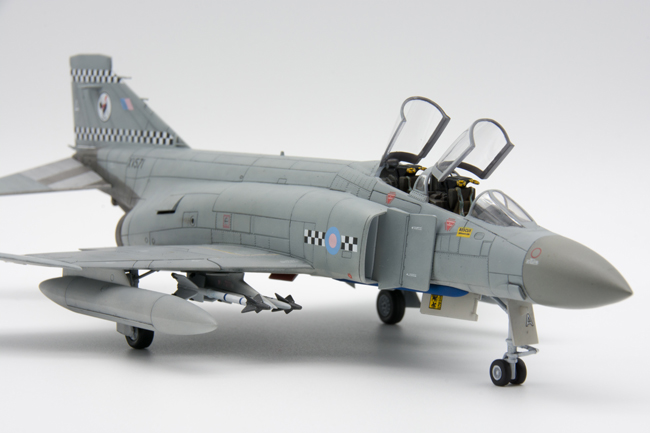 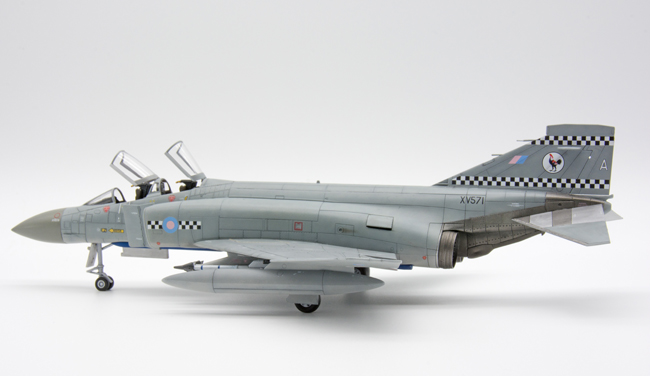 I was lucky enough to be born and brought up in the ‘80s around 30 minutes from RAF Leuchars in Fife, Scotland. At that time Leuchars was a QRA base and housed both 43 (The Fighting Cocks) & 111 (The Tremblers) Squadron. We’d see and hear Phantoms pretty much on a daily basis. Every year in September my father and I would go to the Battle of Britain Airshow where I’d love seeing these big sluggish brutes looking relatively graceful in the air. I have fond memories of those smokey engines and the noise produced by them – a youngster’s dream. I even have a photo of myself as an 8-year-old sitting in the front seat of ‘Black Mike’ with the pilots’ helmet literally flopping around my tiny head. I still remember how heavy it was! This airframe, which had some doubt about where it would be housed after Leuchars was closed as an RAF base and handed over to the Army, is now at RAF Cosford getting ready to be put on display. I’m so happy that it found a home and am looking forward to seeing her again. Anyway, enough of my nostalgic trip down memory lane.

When Airfix announced this kit at Telford back in 2016 I knew I had to have one (or two!), even if it’s not my ‘go to’ scale. When it came to the scheme I had to build one from either 43 or 111 Squadron. I wanted to do a grey scheme but not quite a special scheme so I opted for XV571 from 43 Squadron. The kit looks great in the box in the usual grey/blue sprue colour of the modern era Airfix style. Detail is excellent with fine panel lines on the whole (there are a few which are slightly heavy) and subtle riveting in areas where required but not throughout.

There are three possible options for the aircraft – in flight, on the ground and aircraft carrier take-off position. Various options within the box can be utilised for each. The instructions also give you pictorials as to when and what to fix for each as you go along the build.

The canopy is provided in both a one-piece unit and also in multiple pieces for posing open and are thin with the clarity being excellent. I particularly like the robust pre-moulded angled stubs on the canopy ends which will provide a sturdy fixing in the ‘up’ position rather than the sometimes-fragile smaller nib tabs. Weapons in the form of sidewinders, sparrows, bombs, rocket pods and ballast ordnance are provided together with fuel tanks for under the ‘belly’ and one on each wing.

Even the decals are nice and having used the modern type that Airfix provide should cause no problems at all albeit I’m using aftermarket for my build. Just be ready for a marathon session on stencils. Most of the decal sheet is solely stencils! From the box are three versions for Navy Phantoms. Xtradecal have produced some nice sheets for the FG.1 and at the time of writing are up to Part 7 in RAF colours. These range from the two-tone Grey/Green to some standard and nice special schemes in Barley Grey. The ‘Raspberry Ripple’ Boscombe Down version is also available. Even ‘Black Mike’ and the special overall Blue scheme from 92 Sqd from Wildenrath – so there should be something for everyone. My problem is I want to do about five of the schemes!