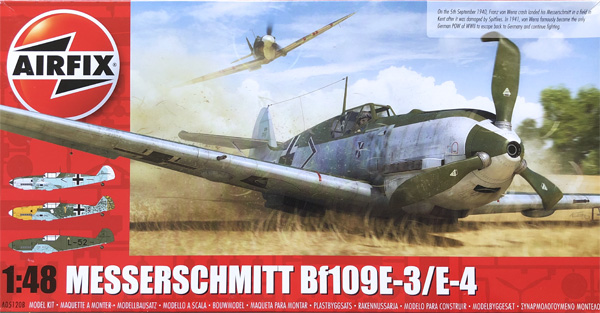 Intro comments and the plan!

The target project as you can see is the impressive 1:48 scale Messerschmitt Bf109E-4/E-4 from Airfix…

Just for the record… if you want to see my full build of the original release of this kit in E-1/E-3/E-4 guise back in 2010 then you can find that in the usual place in the Airfix pages in Aircraft-Finished Now.

As you’ll see above, the primary purpose of this build is to show how you can use the Humbrol Weathering Powders to create really realistic-looking models. And so here we’ll be looking at a Bf 109E-4 aircraft from around the Battle of Britain period and I plan to build one of the options in this most recent boxing of the kit (March 2020) and shown above. The aircraft in question was flown by Oberleutnant Franz von Were, Gruppen-Adjutant I/JG 3, Samer, France, August 1940. 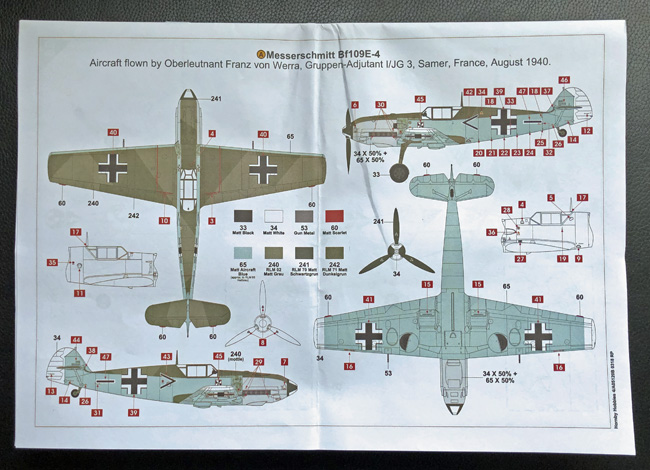 The scheme illustrated is interesting and already featured one of many unique camo patterns applied to Luftwaffe aircraft throughout WWII. The main upper camo is the pretty standard RLM 02 and 71 splinter pattern. This specific aircraft is interesting in that the RLM 65 Blue wraps up over the leading edge of the main wings. In addition, there is some nice subtle mottling aft of the engine cowls on both sides of the fuselage in RLM 02. The rudder and two spinner segments are flat white, as are the undersides of the main wing tips. The engine cowl sides and underside are a very light grey and in the photos of the aircraft that crash-landed in a field in Kent on 5th September 1940 show a slightly darker shade than white that is well depicted on the Airfix box art. To top it off, the spinner has paired segments in white and RLM 70 Schwarzgrun. Nice.

As far as weathering goes, I’ll be building von Werra’s aircraft but adding a bit more weathering to it than it actually had at the time of the crash-landing. The plan is still to apply weathering consistent with some Bf 109E aircraft seen at that time in the Battle of Britain.

von Werra’s story is certainly a famous one…

Franz Xaver Baron von Werra (13 July 1914 – 25 October 1941) was a German World War II fighter pilot and flying ace who was shot down over Britain and captured. He is generally regarded as the only Axis prisoner of war to succeed in escaping from Canadian custody and return to Germany, although a U-Boat seaman, Walter Kurt Reich, is also said to have escaped by jumping from a Polish troopship into the St. Lawrence River in July 1940. Werra managed to return to Germany via the US, Mexico, South America, and Spain, finally reaching Germany on 18 April 1941. Oberleutnant von Werra was awarded the Knight’s Cross of the Iron Cross on 14 December 1940. His story was told in the book The One That Got Away by Kendall Burt and James Leasor, which was made into a film of the same name, starring Hardy Kruger.