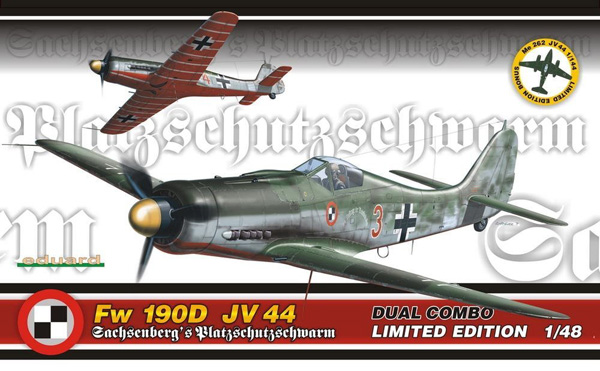 In early 1945 with the allies tightening the noose around Germany, the remnants of the Luftwaffe were given the nearly impossible task of defending the Berlin skies from the relentless British and American bombing campaign. The German war machine was putting great faith in the new technologies developed in the last few years of the war, and had they been able to produce them in greater numbers, and had enough skilled pilots to fly these new machines, the outcome of the war may have been a very different affair. Although underrated when first developed, the new Messerschmitt Me262 finally proved its ability as a fighter capable of inflicting potentially heavy losses against the advancing bombers and their fighter escorts. When the Me262 first took to the skies though, it was assigned a light bomber roll. This seems unusual seeing as the allies had nothing that could come close to competing with the speed of the world’s first jet plane. It was the Luftwaffe ace Adolf Galland though that recognised the Me262’s potential, and in early 1945 was given the chance to prove it.

He formed Jagdverband 44 (JV44), and despite its short existence, is probably one of the best known Luftwaffe units of the Second World War. Galland recognised though that the Me262s were very vulnerable during take off and landing, making them easy targets for the advancing allied fighters. So a second unit of fighters was assigned to clear the skies above the airfield to allow the Me262’s to get airborne, and to get into formation to attack the advancing aircraft. This roll fell to the trusted Fw190D, a high-performance piston engine aircraft, with a proven history against the allied fighters of the time.

To allow the German anti-aircraft units to identify the Fw190’s as friendly units, the lower surfaces were painted bright red with white stripes. This gives the Doras a striking appearance and makes for a great modelling subject.

A note from Geoff C…
I thought that you’d like to see a couple of photos of Chris’s excellent finished project, so here you go! 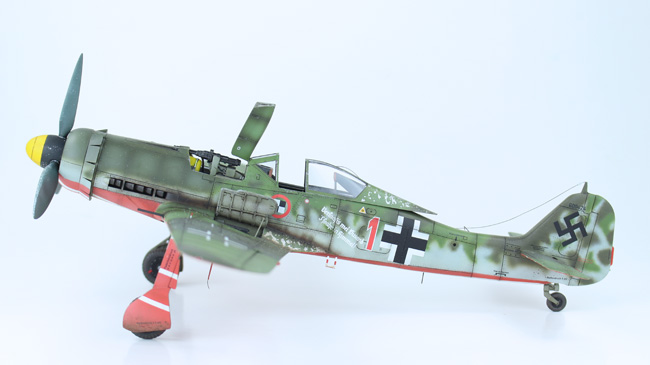 Eduard’s 1:48 Fw190 series has been out for a couple of years now and are recognised as probably the most accurate representations of this classic fighter in 1:48 scale. They have been criticised for being slightly over engineered, but as long as you take your time, follow the instructions closely, and ensure dry fitting everything before committing to glue, you’ll end up with a lovely detailed version of this amazing looking and deadly fighter.

The version I’m building is from the limited edition Fw 190D JV 44 – Sachsenberg’s Platzschtzschwarm dual combo boxing (Cat.no:1154), meaning there are two full kits supplied in the box. There are enough parts to make both a D-9 and a later D-11 version.

The majority of the sprues are identical though, except for the main fuselage sprue containing not only the different fuselage shape, but also the different propellers, air intakes, and fuselage gun cover, as well as some other smaller items. The later D-11’s had the guns removed from the fuselage so there was no need for the bulged panel on the nose that is very apparent on the earlier variants. They were also fitted with an upgraded Jumo 213 engine, but seeing as the ‘D’ series models from Eduard don’t have the full engine like the ‘A’ series (radial engine), the above mentioned parts were the only visible differences between the two variants. The parts have been moulded in the light tan plastic that we’ve come to expect from Eduard, and the detail is fantastic straight out of the box.

The kit has been crisply moulded, and rivals the details I expect from some of the larger Japanese manufacturers. You do get two small frets of photo etch to enhance the already impressive cockpit, one for each kit and again two sets of masks for the two canopies. The instructions are well produced on glossy paper with a choice of five beautifully drawn versions to model, three D-9’s and two D-11’s. Care must be taken with the instructions though, as there are several different parts to use depending on which variant you are building, or if you are planning on leaving the wing root gun covers open, or opening the gun cover on the fuselage. So double check which parts you will need, and the construction sequences before cutting anything off the sprues.

You also get an additional sprue in the box containing a 1:144 scale Me262. This obviously comes with its own clear part, decals and instructions. Seeing as I don’t do anything in this scale, it was a bit of a novelty addition for me. Maybe one day I’ll put my eyesight to the test and give it a go, but for now I think I’ll stick to the slighter larger scale that won’t quite test my sanity as much!

As is the case with most aircraft builds, work begins with the cockpit. The main office is made up with around eleven separate parts. The quality of the raised detail is impressive, and with some careful painting it would produce a fantastic looking cockpit. Seeing as Eduard has supplied some lovely photo etch to improve and enhance these details, it would have been just rude not to use it.