A little bit about the Supermarine Spitfire Mk.VIII

The Mk VIII was an adaptation of the Mk VII without the pressurised cabin, and was intended to become the main production model of the Spitfire. When the “interim” Mk IX proved itself to be adequate for the RAF’s needs it was decided to utilise the shadow factory at Castle Bromwich to produce that version only: the Mk VIII Spitfires were all built by Supermarine.

Apart from the lack of pressurisation, the Mk VIII differed little from the Mk VII. Some early production models had extended wingtips but the majority were fitted with the standard version; according to Supermarine’s Chief Test pilot Jeffrey Quill “When I am asked which mark of Spitfire I consider the best from the flying point of view, I usually reply ‘The Mark VIII with standard wingtips.’ I hated the extended wingtips…They were of no practical value to the Mark VIII and simply reduced the aileron response and the rate of roll. There were three sub-variants for low altitude (LF Mk VIII), medium altitude (F Mk VIII) and high altitude (HF Mk VIII) which were powered respectively by the Merlin 66, Merlin 63 and Merlin 70 engines.

A Mk VIII JF299 was used to experiment with the use of a new cut-back rear fuselage and a “tear-drop” canopy. This was intended to aid pilot visibility; many Spitfire pilots who were shot down were done so by enemies who approached in the aircraft’s blind spot. In trials, the new hood design was found to bring about great improvements to all-round visibility and with several modifications, was standardised on later Spitfires.
This variant served almost exclusively overseas in the Mediterranean, with both the Desert Air Force and the USAAF, in the Pacific, with the Royal Australian Air Force and with the RAF in the China-Burma-India theatre. After the Mk IX and Mk V, the Mk VIII was the third most numerous operational variant with 1,658 examples

As Dave had finished his Mk.VIII and has supplied the full build article, I can bring you a sneak peek photo showing how his Spitfire turned out – nice, isn’t it? 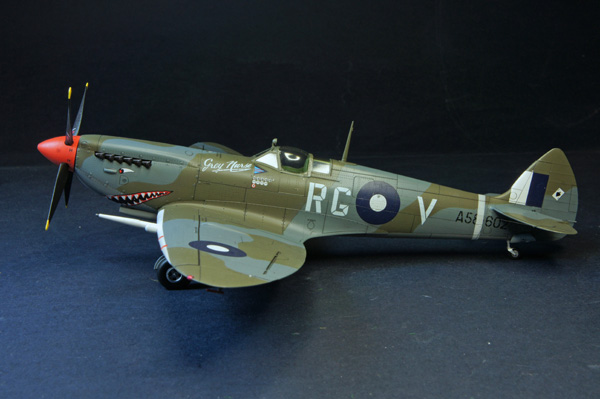 Background to this project

This is the third in Eduard’s series of Spitfires that I have built (Mk. IX and MK.XVI being the other two that you’ll find in the Eduard pages of Finished Now – take a look to check) and again, like the other two versions, it is available in a Profipack with PE and masks or as a simple Weekend Edition minus these parts and with just the one colour scheme option.

This build is to be of the Profipack and as such I intended to build it straight from the box as nothing else is really required unless you want out go to town as I did on my Mk. IX. The kit has 6 decal options covering RAF, RAAF and USAAF versions and these have a combination of clipped, standard and extended wing tips and standard or pointed rudders. I opted to do what I considered to be the most striking, a 457 Sqn RAAF aircraft with a shark mouth painted on the nose. So enough about this and let’s get on with the build.