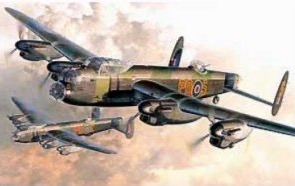 Undoubtedly the most successful British heavy bomber in WWII, the Lancaster bore a great deal of the RAF’s night bombing campaign from mid-1943 until the end of the war.

Now preserved in the Museum at RAF Hendon, PO-S/R5868 or S for Sugar as it became known, is probably the most famous of the Lancasters. She ended the war with an impressive 125 mission tally.

The kit and build notes…

Moulded in Hasegawa’s usual grey plastic, this is a very nice kit, with good engineering, nice detail, nicely engraved panel lines, an average flight deck, somewhat detailed wheel bay and a full bomb load. A word must be said regarding the wing mount engineering, which is brilliant allowing the airframe to be completed and fully painted before assembling the wings. Due to the paint scheme and masking, this is a feature not to be overlooked. As well as the flight deck, the kit boxed-in wing spar is also glued to the bomb bay ceiling, giving strength when attaching the wings. The wing tip navigation lights are provided in the clear parts so, to be used, the solid plastic on the wing tip has to be removed.

Clear parts are also nice and with a good fit. According to some photos of the real aircraft, there’s however a mistake in the scape hatch positioning in the canopy, which I only noticed almost at the end of the build. As there are no after-market parts to replace, and in order to correct that, one must sand and polish the canopy frame and re-scribe it, which I didn’t.

The rest of the kit, although quite good, isn’t “putty-free”, especially the fuselage halves and the nacelles.

The undercarriage can also be fully assembled and painted before insert the wheel which, by the way, has the flat spot already moulded.

All three aircraft are from 467 Squadron at various times during 1943/44 and all are in Dark Earth/Dark Green over Black. According to the type chosen, one will also have the option to use the H2X radar system or not.

Instructions are accurate and easy to follow, with Gunze colour codes.

Decals are very well printed and in right shade.