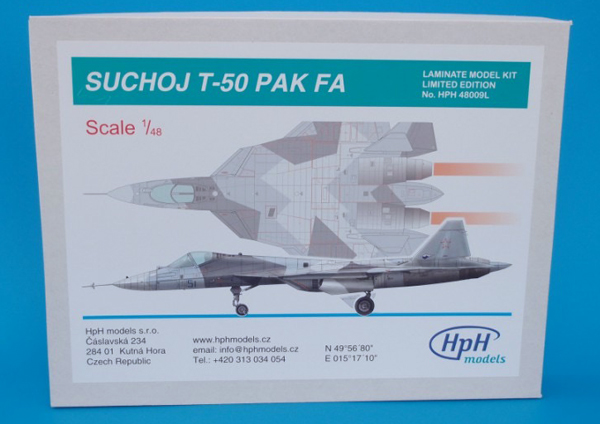 A note from Geoff C…
It’s very good to be able to welcome Bernard to SMN with his impressive build of the HpH Suchoi T-50 PAK FA, better known as the Sukhoi Su-57. Here’s a look at how it all turned out… 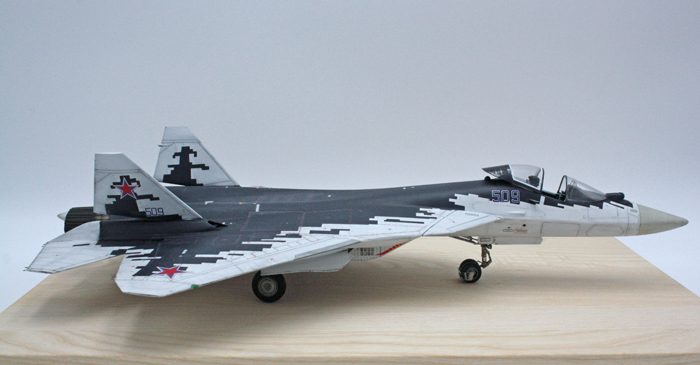 I love the scheme and it makes me think that the aircraft would have been very at home in the film Firefox, starring Clint Eastwood, among others…
Over to you Bernard…

When such a beast spread its wings in the sky, when you love Russian airplanes, for sure you want to model it!

This fifth-generation multi-role aircraft is still at prototype level and round 10 items have been produced.

Regarding performance, its maximum speed is announced at Mach 2,45 at a maximum altitude of 20,000 meters.

Armament is located inside 2 internal weapon bays and a possibility to have external pylons. For air to air combat, one internal 30mm autogun (up to 1,800 rounds per minute).

I have chosen to build the ‘509’, which is painted with a pixelized camouflage.

About the HPH kit

Early 2019 only HpH manufacturer was producing the Su-57 at 1:48 scale. Version proposed is the first flyable version wearing fuselage number ‘51’. The colour scheme is proposed as the ‘Arctic’ camouflage (White, Gray and Dark Blue) already seen on the Su-35.