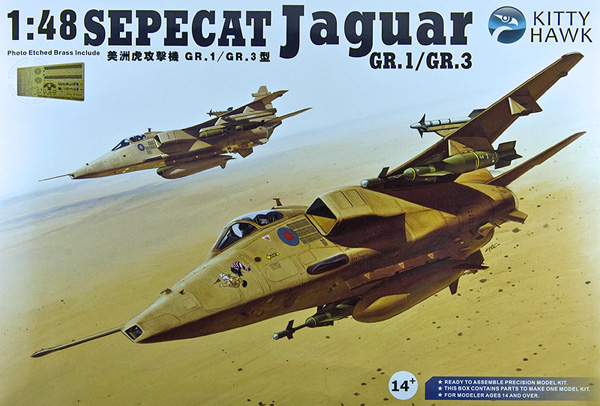 A note from Geoff C…
I have great respect for anyone who can complete this kit – I tried and failed as you may have seen from my part-build ‘Crashed and Burned’ in Aircraft-Finished Now.

And now we have another excellent build from Calum – well done both of you! :)

Here’s a quick look at how Calum’s No.6 Sqn GR-1A turned out… 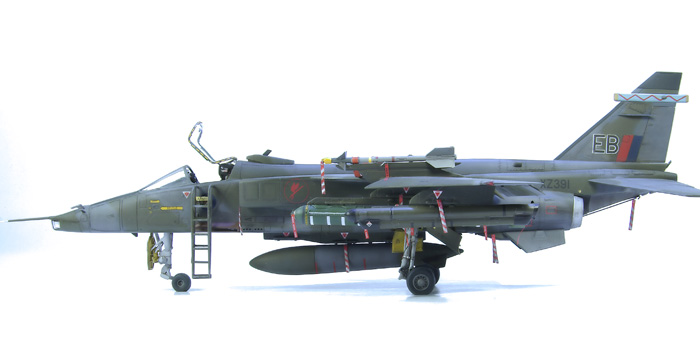 Nice, isn’t it?
Over to you Calum for your story on this one…

The SEPECAT Jaguar began life in the early 1960’s as a joint British/French collaboration to produce a jet trainer with a secondary light strike capability. Originally the RAF was only interested in the trainer variant as their light strike requirements were to be filled by the advanced BAC-Dassault Anglo-French Variable Geometry (AFVG) aircraft. However with the cancellation of the AFVG, along with the cancellation of the F-111, itself a replacement for the cancelled TSR.2 and the P.1154 supersonic V/STOL fighter, the RAF realised it would not have sufficient strike capability for the future. By late 1970 the RAF order had changed to 165 single seat strike aircraft and 35 two seat trainers.

The RAF Jaguar included a more advanced avionics suite than its French cousin, including the laser range-finder and marked-target seeker which gave the aircraft its distinct chisel nose. The aircraft also contained one of the first digital computers fitted to a strike aircraft. Entering service in 1975 the RAF Jaguars replaced the FGR-2 Phantoms in the close air support, tactical strike and tactical reconnaissance roles. The RAF Jaguar force first saw combat in 1991 during Operation Granby (Desert Storm). It also flew combat missions over Bosnia in 1994 and participated in Operation Northern Watch over Iraq in 1999. Due to budget cuts, the RAF withdrew their Jaguars from service in 2007.

The Kitty Hawk Jaguar kits are a bit of a mixed bag. The moulding is nice with lots of fine but sharp recessed detail however the kit suffers from being overly complicated in breakdown. It also is designed to have many of the external panels open. Whilst closing these is not particularly difficult getting these joins to look the same as the rest of the kit is an unwanted extra complication. The instruction sheet was also missing pages.

Other problems with the RAF boxing are incorrect underwing racks; inappropriate weapons (except for the BL 755 cluster bombs), and the inclusion of only one drop tank, which is also wrong in shape. The decals in my example were also out of register which at the beginning wasn’t a problem as I had two Model Alliance sheets (more on the decals later).

The kit comes with a small photo etch (PE) set which has some useful parts (antennae and exhaust petals) however the PE instrument panel and cockpit sidewalls in particular are not acceptable in a such a modern kit.