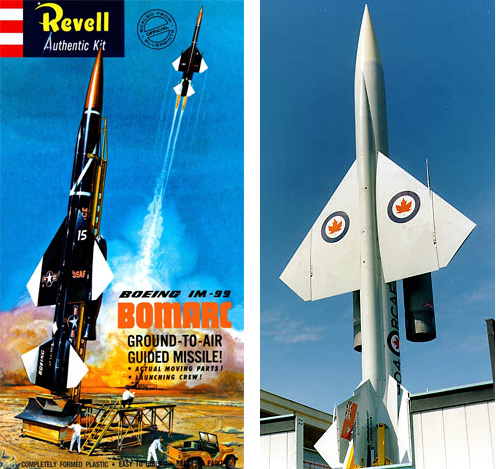 Special Feature Build: Gilles Pepin
This review is different to the usual reviews in the Magazine as Gilles has created a 15 page PDF for a detailed review of the whole project.

The Canadian Armed Forces designation for the Boeing IM-99B was CIM-10B
Introduced after the cancellation of the Avro Arrow, the Bomarc filled an anti-aircraft role as an unmanned long-range, surface-to-air weapon. By 1962 two RCAF Missile Squadrons (North Bay, Ontario, and La Macaza, Quebec) were equipped with Bomarcs as part of the North American Air Defence Command (NORAD). Both squadrons formally disbanded on April 7, 1972. The Bomarcs were returned to the United States by September 1972. The Bomarc was a winged missile stored horizontally in a shelter from which it could be launched, after being raised vertically through a sliding roof. A solid-propellant booster rocket augmented the thrust of the two ramjet engines. Bomarc stands for Boeing Michigan Aeronautical Research Center.

First issued in 1959, this 2016 re-issue is well engineered, with very little flashing, just a slight bend of the long parts of the rail on the launch pad. Excellent decals. The kit assembles nicely. This model depicts the RCAF version.