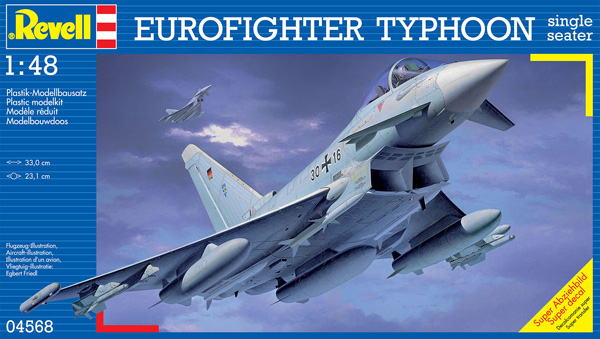 Don’t forget…
You have some excellent walkaround photos – inside and out for the single-seat Eurofighter Typhoon in your SMN Photo Reference Library.

Sometime around the beginning of April 2014, several contributors and the Editor were having a conversation about D-Day and the fact that this year (2014) marks the 70th anniversary of that famous event. Someone questioned whether the RAF would commemorate this historical event and an idea was born to do a scale model of the Eurofighter Typhoon in a commemorative scheme. This immediately appealed to me because of my dislike for boring grey jets and the chance to capture a potentially eye-catching scheme. I jumped at the chance and my mind went to work as to how I would do it. Revell had kindly provided a review sample of their 1:48th Eurofighter Typhoon Single Seater, so with this in hand I set to work.

The kit comes in Revell’s typically flimsy end opening box, but like many of their kits this one too was crammed full of neatly moulded bits; 6 sprues worth to be precise, plus another sprue of clear plastic for the flawless transparencies. The decal sheet was quite overwhelming (in a good way!), containing markings for 7 aircraft. These are:

As well as the aircraft markings, there was a full complement of airframe stencils together with the required markings for the provided weaponry too. The quality of the decal sheet looked to be very good with all markings printed in register and the colours seemed pretty solid.

So far so good, but I was then confronted by a very typical (of Revell) cramped and overloaded instruction sheet. I know it has been said many times before, but why do they insist on printing their instructions in this manner?! I guess it goes hand in hand with the very spurious numbering of parts on the sprues. Anyway, that’s enough whinging from me.

I was also lucky enough to be given the Eduard Zoom set for this kit. This contains enough pre-painted photo etch to really jazz up the cockpit, in particular the ejection seat.

With all this to hand, it was time to crack on with this plan. What plan? Well, how about a “modern” Typhoon painted like a “real” Typhoon (the Hawker one) from D-Day? A nice bit of camouflage with those striking invasion stripes could almost make the Eurofighter Typhoon bearable to look at.