When, in 1941, Luftwaffe units began to receive the Fw 190A, it was already apparent that the aircraft in question could be multi-roled. Robust construction and a powerful engine allowed for the use of a wide range of weaponry, not only imbedded in the wings, but also carried under a variety of hardpoints. One of the main variants to be extrapolated from the Fw190 was a fighter-bomber version designed for the direct support of ground forces.

The main precision bomber of the Luftwaffe, the Ju 87 Stuka, was becoming evidently obsolete in the face of increasing allied air power. A new requirement called for an aircraft capable of delivering ordinance as well as simultaneously being able to protect itself in the event of combat with opposing fighters.

The development of a fully capable fighter-bomber variant of the Fw 190 was not a straightforward one. Changes from the straight fighter included the removal of the outboard wing guns and the addition of an underfuselage ETC 501 rack for the carriage of 250 kg or 500kg bombs. The cockpit, engine and fuel tanks were armoured as to provide protection from underneath. Series production of the type with these modifications was undertaken, but initially only as conversions from standard As. These aircraft were temporarily known as ‘Schlachtflugzeug 1’, and became the Fw 190F-1. As the Fw 190A line evolved, there was a parallel development of theFw190F-2 (A-5/U3), F-3 (from theA-5 andA-6), F-8 (theA-8) and the F-9 (A-9).

The Fw 190F-8, in service from 1944, was the most widely used version of the type. The main differentiating features from previous types included the use of a propeller with a smaller diameter, and an increase in the fuselage mounted MG 17 7.92mm guns to 13mm MG 131s. The wing root cannon made up of two MG 151/20E weapons remained unchanged. Also unchanged was the use of the BMW801D-2 engine. A strengthened wing also became a standard feature on the F-8, first used on the Fw 190A-6, and also, by association, the F-3, and was capable of carrying racks for 50kg bombs. The strengthened wing and a quartet of ETC 50 or ETC 71 racks enabled the carriage of 50kg or 70kg bombs respectively. Variations were rounded out with the possibility of mountingETC503 racks, enabling the use of 250kg bombs under each wing.

Many Fw 190F-8s ended their service careers abandoned on Czech airfields. They were also utilized in other projects, such as potential use as torpedo carriers and mother aircraft for ‘Pucke-Pack’ with the Ju 88, better known as the Mistel. At the very end of the war, Fw 190F-8s were also considered for a rather desperate move, a type of ground target ‘Rammjäger’ to have been deployed as Kommando Bienenstock. 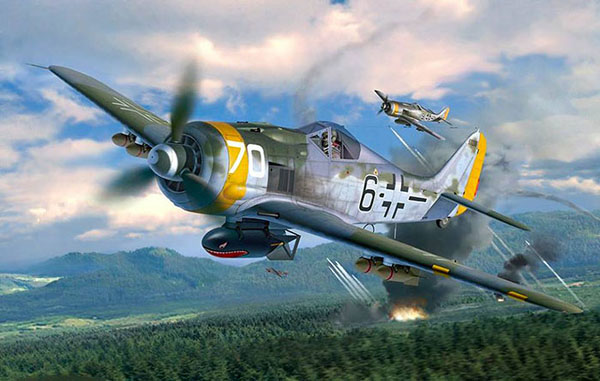 Just before we get started… a note from Geoff

I thought that you might like to see a few photos of Dave’s completed model right up front, so here it is and what a good job he’s done too!