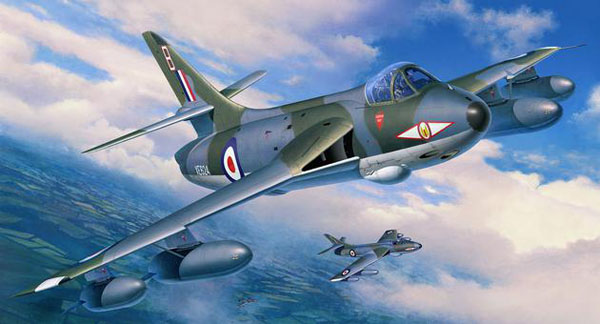 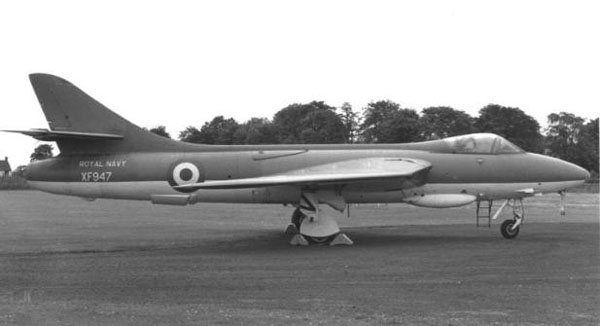 G-PSST was originally built for the Royal Air Force as a mark F.4, XF947, back in 1956. Part of the first production batch of F.4s, XF947 was initially delivered to No.5 Maintenance Unit at Kemble in Gloucestershire before entering active service with No.3(Fighter) Squadron at RAF Geilenkirchen, Germany, as part of 2 ATAF (Allied Tactical Air Force). After a short period of time she was re-allocated to 229 Operational Conversion Unit at RAF Chivenor in Devon.

When XF947′s operational career with the RAF was over, she was transferred to the Fleet Air Arm at Arbroath (HMS Condor) as a Ground Instructional Airframe (number A2568) before being classed surplus to requirements and placed up for disposal.

So it was that she was purchased by Hawker Siddeley Aviation in 1971 as G-9-317 for conversion to a Mk.58A as part of a contract for the Swiss Air Force.

Re-serialled as J-4104, she was delivered to the Swiss Air Force on 2nd February 1972 and spent most of her remaining military career as a target tug carrying the Swedish MBV-2S winch which was carried under the starboard wing. 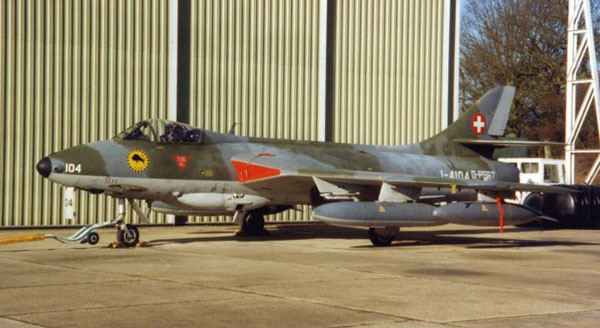 In 1996 J-4104 was retired from military service for a second time, was sold to a private owner and ferried to the British Aerospace airfield at Dunsfold in Surrey, with a total of just 1659 hours on the airframe!

In answer to the most common question I’m asked, no, I wasn’t on anything at the time.

As far back as my own military flying days, I’ve been envious of the American attitude to paint schemes on military and ex-military aircraft. From the most basic nose art, through the wartime P-51 Mustang schemes to the ultimate paint jobs, the racers at Reno.

There is a plethora of ex-military aircraft in the UK, all dressed up to represent some squadron or other’s markings, often a squadron with which the aircraft never actually served and there are more than enough Hunters around to satisfy the purists.

So, in these days of political correctness, I thought it would make a change to see a Hunter painted as an art form. A celebration of one of the few aircraft that fall in to that category of aircraft that somehow “look right” and, from its looks, you know that they fly right too. In the Hunter’s case, it flies even better than it looks.

Custom motorbikes are often painted using a similar approach. Some bikes are made for customisation and others aren’t. In my quest for a scheme, I therefore decided that what I needed to find was an air brush wielding Hell’s Angel, someone who wanted a machine with a bit more horsepower to work on. Seriously, I started hanging around bikers but quickly realised that any artist was going to need a proper brief.

By this time I had, if you’ll excuse the pun, the ember of an idea that flames were going to form part of the scheme and this progressed on to something based around a Space Shuttle re-entry.

Whilst at Jet Heritage, I met a kindred spirit in Robin “Chippy” Carpenter who, at that time, had an aircraft spraying company. I explained my ideas to him and within a few days, he had produced a couple of airbrush sketches. Those initial concepts fired me in to action and, using Corel Draw, I began playing around with some ideas based on the flames, smoke and re-entry.

That early enthusiasm slowly gave way to practicality. The sheer man hours required to airbrush all those flames meant they were out of the question. I wanted the colours to be blended and the early concept was that of a white hot leading edge applied to all the surfaces, getting cooler and fading, through smoke, to a midnight star studded sky.

But somehow the lines just didn’t look right, whether it was a curve or a straight line, it didn’t seem to fit the wing’s plan form. I straightened the line but that didn’t look right either and, in an attempt to get back to the angular swept back lines, placed the pattern in mirror by mistake. Bingo! It somehow looked very neat.

From that point on it was just a matter of tweaking the curves and colours and I was stretching the boundaries of Corel Draw’s blending function to the limit!

Although I have a 3D modelling program, attempts to use it to portray the scheme proved themselves to be a waste of both time and effort. Working in 2D, I was confident that the scheme would work and yet again Chippy came up trumps by building Revell’s 32nd scale Hunter model and painting it in my proposed colours. It worked.

As for the stars, they indicate position of the major stars in the three signs present in my family, Aries (myself), Virgo (Annie my wife and our daughter Melissa) and Taurus (our son Mark). These were accurately researched using a superb software package called Starrynight Pro.

All I needed now was a sponsor for the paint and the spraying. I tried all the paint companies and was delighted when PRC-DeSoto (then called Courtaulds Aerospace) said they would provide the paint free of charge. Then AIM Aviation (Jecco) at Bournemouth came up with sponsorship for the actual spraying. The fact that Chippy was now working for them had, I am quite sure, absolutely nothing to do with it!

The work took four nerve wracking weeks. There were gantries rigged to give a birds-eye view and enable us to check both the colouring and the shape of the blends. I mounted a time lapse video camera on to one of those gantries to record the progress. The actual spraying took less than 10% of the time – most of it was spent flatting down coats of paint and masking up for the next.

She was wheeled out in the first week of January 1999, looking perfect. Many felt that the scheme was simply outrageous, nothing more, nothing less. That was until they saw her airborne, then the design comes in to its own – somehow accentuating the clean lines of the Hunter.
As for the registration, she was going to be registered as G-FLAP until I started on the artwork, and then the phrase “psssst, look at this!” came to mind. Others thought, “pissed again” but G-PSST she became, or as one Jet Heritage museum volunteer said to me, Personal Super Sonic Transport.
The name came out of the blue many years ago. I promised myself that my first “warbird” would have a name and I enjoyed the double meaning. It was intended for the aircraft top of my wish list, an OV-10 Bronco, but they only built 370 of them and they’re still in demand by those nations who acquired them from the US, not to mention the DEA, BLM and the Californian Forestry Dept.

Anyway, it’s not a felony to paint a Hunter like this, just a Miss Demeanour! (Jonathon Whaley) take a look here for more info: http://www.heritageaviation.com/ 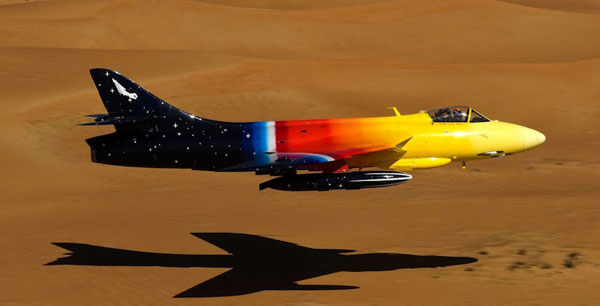 This just has to be one of the most outlandish schemes ever applied to any aircraft ever! One I simply love – what is there not to like about it, especially if you have been privileged to see Jonathon Whaley doing his stuff displaying this magnificent aircraft.