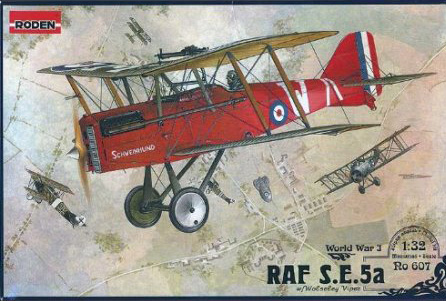 A note from Geoff C…
So pleased to be able to feature a project from Kenny MacK and very nicely his S.E.5a has turned out too – great stuff!

Kenny has kindly agreed to share some build notes and some pics with us all and so that’s what follows – thanks again Kenny :)

Here’s a quick look at how it all turned out – nice, very nice! 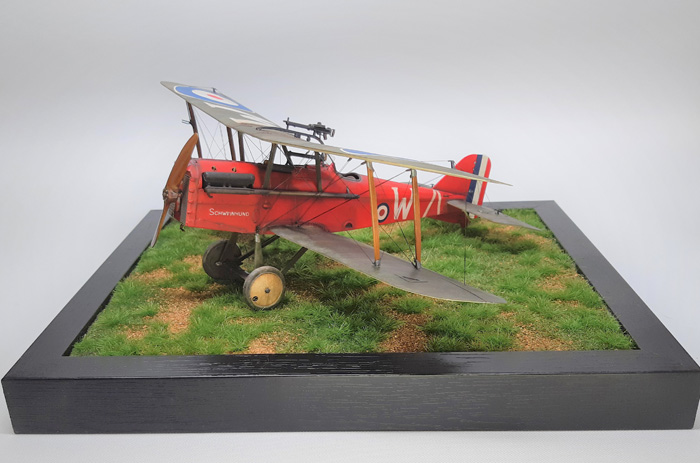 Here’s a little bit about the S.E.5a…

The Royal Aircraft Factory S.E.5 was a British biplane fighter aircraft of the First World War. It was developed at the Royal Aircraft Factory by a team consisting of Henry Folland, John Kenworthy and Major Frank Goodden. It was one of the fastest aircraft of the war, while being both stable and relatively manoeuvrable. According to aviation author Robert Jackson, the S.E.5 was: “the nimble fighter that has since been described as the ‘Spitfire of World War One’”.

In most respects the S.E.5 had superior performance to the rival Sopwith Camel, although it was less immediately responsive to the controls. Problems with its Hispano-Suiza engine, particularly the geared-output H-S 8B-powered early versions, meant that there was a chronic shortage of the type until well into 1918. Thus, while the first examples had reached the Western Front before the Camel, there were fewer squadrons equipped with the S.E.5 than with the Sopwith fighter.

Together with the Camel, the S.E.5 was instrumental in regaining allied air superiority in mid-1917 and maintaining it for the rest of the war, ensuring there was no repetition of “Bloody April” 1917 when losses in the Royal Flying Corps were much heavier than in the Luftstreitkräfte. The S.E.5s remained in RAF service for some time following the Armistice that ended the conflict; some were transferred to various overseas military operators, while a number were also adopted by civilian operators.

Only 77 original S.E.5 aircraft had been completed prior to production settling upon an improved model, designated as the S.E.5a. The initial models of the S.E.5a differed from late production examples of the S.E.5 only in the type of engine installed – a geared 200 hp Hispano-Suiza 8b, often turning a large clockwise-rotation four-bladed propeller, replacing the 150 hp H.S. 8A model. In total 5,265 S.E.5s were constructed by six manufacturers: Austin Motors (1,650), Air Navigation and Engineering Company (560), Curtiss (1), Martinsyde (258), the Royal Aircraft Factory (200), Vickers (2,164) and Wolseley Motors Limited (431).

Shortly following the American entry into World War I, plans were mooted for several American aircraft manufacturers to commence mass production of aircraft already in service with the Allied powers, one such fighter being the S.E.5. In addition to an order of 38 Austin-built S.E.5a aircraft which were produced in Britain and assigned to the American Expeditionary Force to equip already-deployed US Army squadrons, the US Government issued multiple orders to the Curtiss Aeroplane and Motor Company for the manufacture and delivery of around 1,000 S.E.5s to be produced in the United States. However, only one Curtiss-built aircraft would be completed prior to the end of the conflict, after which demand for the S.E.5 had effectively evaporated, production being quickly halted after a further 56 aircraft were assembled using already-delivered components.

At first, airframe construction outstripped the very limited supply of French-built Hispano-Suiza engines and squadrons earmarked to receive the new fighter had to soldier on with Airco DH 5s and Nieuport 24s until early 1918. The troublesome geared “-8b” model was prone to have serious gear reduction system problems, sometimes with the propeller (and even the entire gearbox on a very few occasions) separating from the engine and airframe in flight, a problem shared with the similarly-powered Sopwith Dolphin. The introduction of the 200 hp (149 kW) Wolseley Viper, a high-compression, direct-drive version of the Hispano-Suiza 8a made under licence by Wolseley Motors Limited, solved the S.E.5a’s engine problems and was promptly adopted as the type’s standard powerplant. A number of aircraft were subsequently converted to a two-seat configuration in order to serve as trainer aircraft. (Source: Wikipedia)

Over to you Kenny!