Of course, such projects are not easily achievable but they show us many skills that we can bring into many of our projects, whatever their complexity :)

Here’s how it all turned out… 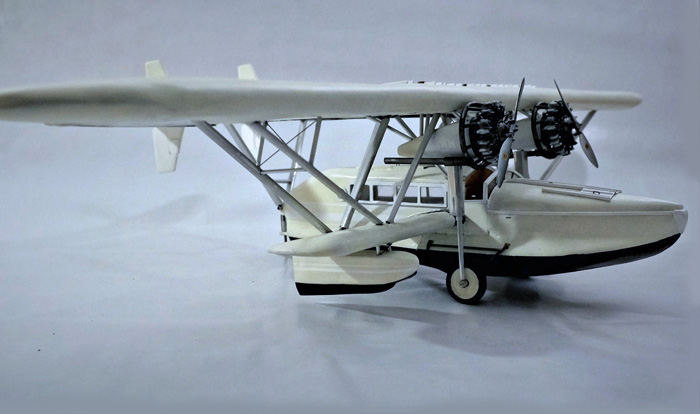 Over to you Alan for your story on this one…

Those present at last year’s SMN biplane modelling workshop will recognise the concept that building a model biplane involves the creation of a set of sub-assemblies, eventually bringing them together to form the finished article. What then could be more appropriate for my next project, Igor Sikorsky’s S38, an aircraft once described as “A collection of airplane parts flying in formation.”

This is exactly how this project was to pan out. The model was built as a series of small projects, within an overall plan of how each later would connect.

My first attempt at scratch building, it is a largely self-taught mixture of guesswork engineering and clumsy sculpture, held together by tubes and wire, luck, glue and gravity. I hope you enjoy reading about it.

The Plane (and its Owners)… 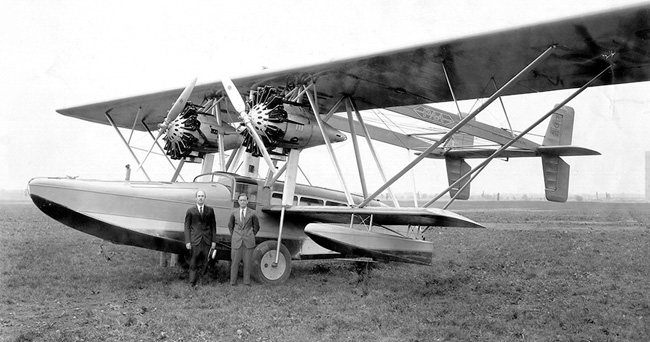 First flown in 1928, the S38 was not strictly a biplane, correctly described as a sesiquiplane amphibian. Its lower wings were short and stubby, less than half the area of the upper parasol-type wing.

Powered by two 420 bhp Pratt and Whitney Wasp engines, the S38 in Pan Am service typically carried eight to ten passengers on up to 500 mile routings, operating from land or water. Pan Am were ultimately to fly around 40% of Sikorsky’s total production of just over a hundred aircraft . 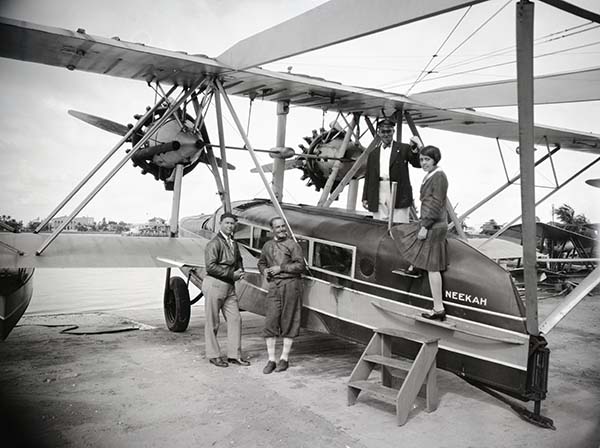 Private owners would fit out the plane to their own requirements, embracing the spirit of the S38 as a gentleman’s, or indeed an “explorers” air yacht. 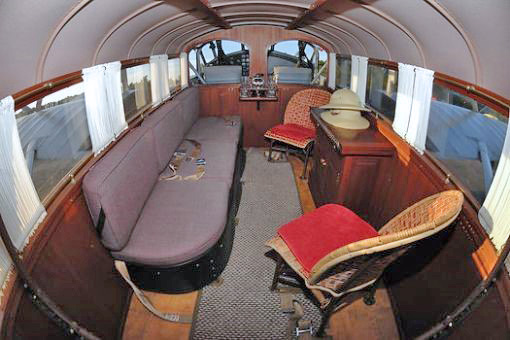 With a $75,000 price ticket (before optional extras) this plane was out of the range of anyone but the seriously wealthy. Igor Sikorsky “ Strongly recommended” that the owner also employed a Sikorsky trained mechanic full time to maintain the aircraft. The type of people who bought these did not need to save up for them. Col RR Mc Cormick, owner of the Chicago Tribune, bought two.

Grover Loening, in his book “Amphibian, The Story of the Loening Biplane” referring, in this case to a Loening Air Yacht owner, Mr Marshall Field, being thoroughly satisfied with his aircraft “quite casually, as if it were in the same category as a car… no mystery or glamour, just useful”.

Nevertheless, several planes were used rashly as their millionaire owners tried to get into the record books, sometimes with tragic consequences. Attempts by Frances Grayson to be the “First woman passenger to fly the Atlantic” or the Hutchinsons as “first family (complete with dog) to fly the Atlantic” both ended in the loss of the S38 involved. Ms Grayson’s case was particularly sad as the plane , Ms Grayson and the entire crew were lost without trace. 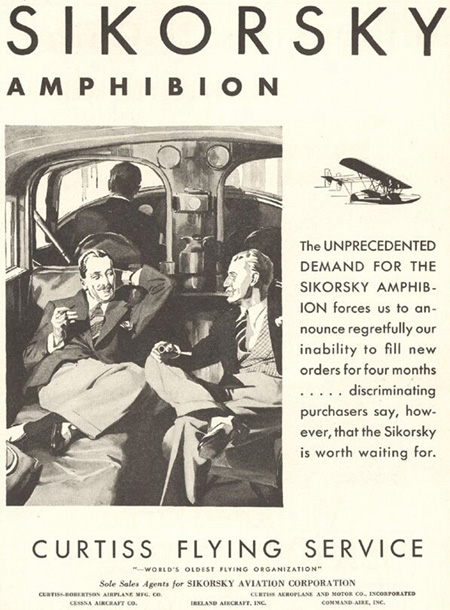 Sikorsky coined the name “Amphibion” to describe his plane. It didn’t catch on.


The plane co-stars in a number of scenes portraying the romance between Hughes and Katherine Hepburn. Hughes was in real life an S38 pilot/owner. The plane featured in the movie is a 1990s built replica. 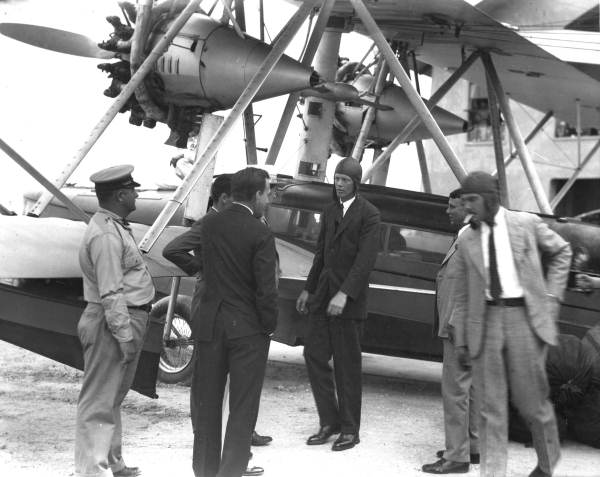 Charles Lindbergh arrives (somewhere in Central/ South America ?) for a formal welcome. A nice shot as it can’t have been posed (his co-pilot appears to be desperate for a cigarette!). Lindbergh, often accompanied by Juan Trippe, Pan Am’s founder, and their joint spouses, staked out most of Pan Am’s routes into the Caribbean and Central / South America piloting an S38. 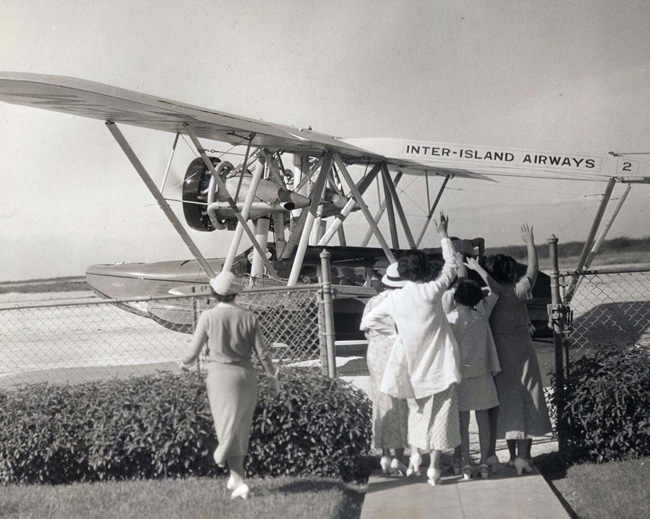 Inter-Island Airways operated four S38s out of Hawaii. Three were damaged by the Japanese during the Pearl Harbour attack, the single remaining aircraft was still in service in 1946. 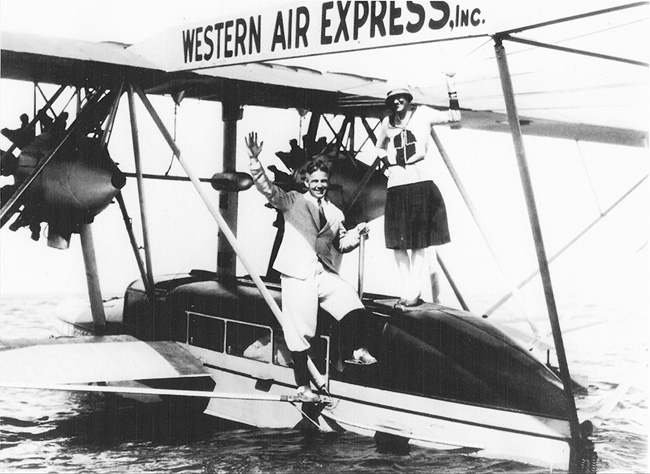 Western Air Express ran a S38 service between Los Angeles and the Catalina Island resort. This particular aircraft was wrecked due to a wheels down landing on the water.

In the Appendix to his excellent book on the S38, PJ Capelotti has logged the fate of all the aircraft where known. Around 20% were destroyed in crashes or simply lost without trace. A similar number appear to have been destroyed in fires or lost at their moorings due to weather conditions. The planes frequently took a battering by what a layman may idly think of as a simple landing on water. They required highly skilled pilots and a tremendous amount of maintenance to remain serviceable. Lindbergh on one occasion needed to climb out of the roof hatch whilst the plane was airborne to secure a tail strut which had somehow come loose!

There were always concerns about how safely to get out of a stricken S38. The roof hatch slides open to reveal a web of deadly struts and cables framed by the solid twin boom outriggers and the tail. In 1934 an S38 crash killed seven parachute equipped soldiers and aircrew, evidently unable to escape from the falling plane.
The Army immediately scrapped their entire remaining complement of nine aircraft.

Sources of information, plus useful reading

Explorers air Yacht – The Sikorsky S 38 Flying Boat By PJ Capelotti. The best (possibly only?) book on the plane.
Instructions on the care and Maintenance off the Sikorsky Amphibion S38 (1929) 41-page manual without which I would never have attempted to tackle this project. Purchased in CD form along with:
The Sikorsky S38 Amphibian (1929) 19-page contemporary Sikorsky sales Brochure

Both these items were found on eBay for a combined price of £5.95! The seller has a goldmine of obscure aircraft manuals etc and is worth checking out:
https://www.ebay.co.uk/usr/superchalk64