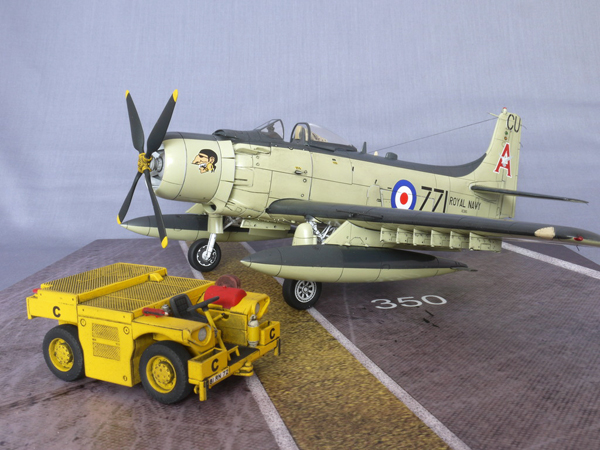 I have always liked the Skyraider, and thought the Fleet Air Arm colours of Extra Dark Sea Grey and Sky were one of the best colour schemes ever to grace a Royal Navy aircraft. So I thought I would combine the two, and make a fictitious Skyraider in Fleet Air Arm markings.

The Senior Service have operated the Skyraider in front line service before as the AEW1 (AD-4W).The model will be based on the excellent Tamiya A-1H Skyraider kit with a few extras.

Below is the back story (which includes a lot of facts) that goes with the build.

This is just what scale modelling is all about – allowing your imagination to flow and extend the bounds of reality to have some fun with your modelling and enjoy a challenge and a new project. Love it!

Above you’ll see a sneak peek at Julian’s completed FAA Skyraider – looks awesome in that FAA scheme don’t you think?

After the Torrey Canyon disaster in March 1967, the RAF and the Royal Navy came in for criticism as 25% of the 42 bombs dropped missed the target. The main reason being was, not the lack of skill by the pilots but bomb technology was lagging behind aircraft technology. The Royal Navy was asked to form a ground attack squadron to help develop tactics with the new bombs being developed for the armed forces. The squadron was to be land-based, but able to operate not only from Royal Navy Aircraft Carriers, but also U.S. Navy Carriers when required as some of the trials would be from U.S. Ships.

The decision was taken to obtain Douglas A-1 Skyraiders from America. The American Navy was phasing the Skyraider out, and starting to receive the LTV A-7 Corsair II. Not only could the Skyraider operate from US Navy Ships, but the American maintainers knew these aircraft very well. Another advantage, was the fact that they would cost less to operate than front line jets such as the Buccaneer.

They would be based at RNAS Culdrose (HMS Seahawk) in Cornwall. The Skyraider had been operated by the Royal Navy before with the AEW version of the aircraft, so had some experience of the type. This squadron would be operating for approximately 2 years during the trials period. The aircraft would be painted in Extra Dark Sea Grey and Sky, as were other Royal Navy propeller aircraft of the time. The responsibility was given to 700 NAS, which was, and still is to this day, an Intensive Flying Trials Unit (IFTU). Originally formed in January 1940 at RNAS Hatston (HMS Sparrowhawk) in Orkney. It was intended for the squadron to be formed in January 1968 to 1970 operating with the Suffix letter A. Thus being known as 700A NAS. At the same time, 700 squadron would also be carrying out IFTU duties with the introduction of the McDonnell Douglas F-4K Phantom II FG.1. This squadron would be known as 700P NAS.

As the intention was for cross deck operations with the American Navy, a decision was made to paint colourful tail markings as was common with US Naval Aircraft at the time. On account of the squadrons connection with hawks (formed at HMS Sparrowhawk, and now stationed at HMS Seahawk), it was decided to incorporate a bird of prey in the tail art work. 700A operated sea trials on several Royal Navy ships including, HMS Ark Royal (R09) and HMS Eagle (R05). USS Forrestal (CV-59) was the first American ship 700A performed trials on while she was in the Mediterranean during 1968. As they were based in Cornwall, they became known as the Pirates of Penzance by the Americans. This led to a Pirates head being painted on the engine cowl of their aircraft.

In September of 1969, the Skyraiders of 700A embarked on the USS Independence (CV-62) for a NATO exercise in the North Atlantic (NORLANT). During this exercise, the USS Independence participated in testing the Hawker Siddeley Harrier in flight deck operations. Incidently, 700A would form again in 1979 operating the new BAe Sea Harrier FRS1. The unit would paint the same tail markings on the tails of their Sea Harriers, that was painted on the Skyraiders embarked on the USS Independence during that exercise. After a very successful trials period, 700A was decommissioned in early 1970’s. 700 NAS returned to RNAS Culdrose from 1998-2008 operating as 700M NAS with the Agusta Westland Merlin HM.1 and again in 2014, until the present day as 700X NAS testing the Boeing Insitu ScanEagle.