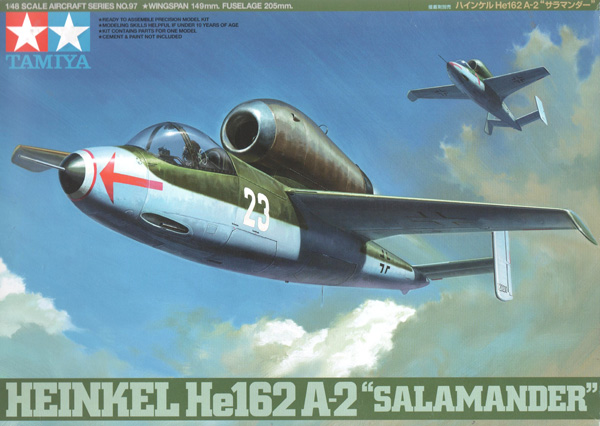 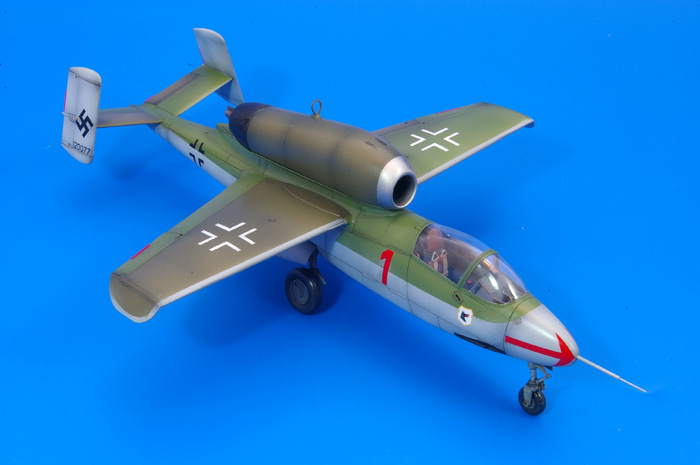 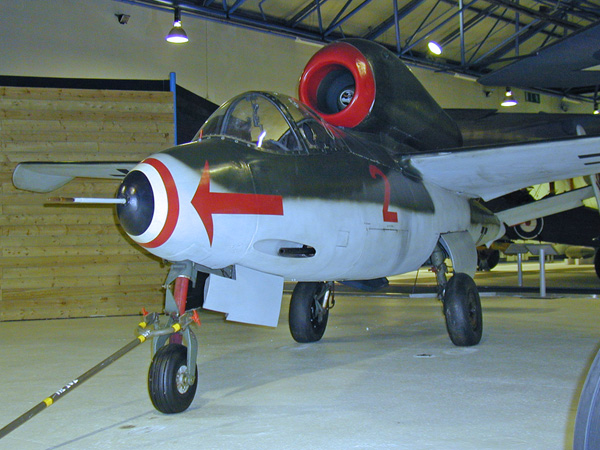 Over to you Dai for your story…

The Heinkel 162 was an aircraft design that reflected the sad state of the German war machine towards the end of the Second World War. In the months following the successful invasion of Normandy the Allies rapidly gained air superiority over the Luftwaffe. There was an urgent need to counter low-level attacks from allied fighters and fighter-bombers. To meet this requirement the development of a short-range jet powered fighter was proposed. This aircraft was to be simple to build using non-strategic materials where possible and it was to be built using unskilled or (more ominously) forced labour.

The relentless Allied bombing campaign had taken its toll on the Luftwaffe not only in terms of the supply of materials and aircraft, but also in terms of personnel. Experienced pilots were now becoming few and far between and it is a further indictment of the state of the German High Command at that time that it was proposed that these aircraft should be flown after its pilots (many of whom would be teenagers) had received only basic glider training.

The aircraft was designed around the BMW 003 jet engine, with the more powerful Jumo 004 jet engines being reserved for the Arado 234 and the Messerschmitt 262.
The He162 was designed and built in a remarkably short time. Detailed design began in September 1944, with the first flight of the prototype taking place in December of that year. Production began early in 1945, but suffered greatly from the lack of engines and components which were being built by several manufacturers under very difficult circumstances in places such as salt mines to keep their facilities safe from Allied bombing.

Only small numbers of the He162 were ever deployed operationally and the type saw only around one month of combat before the war ended. The He162 proved difficult to fly and there were several fatal take-off and landing accidents when pilots were training to convert to the He162 from other types of aircraft. While the He162 was undoubtedly fast enough to escape from contemporary allied fighters should the need have arisen to do so, there were few if any successful combats reported by He162 pilots with only one (unconfirmed) victory against an RAF Hawker Typhoon being recorded.

A large number of airframes, some in flying condition and many more in various states of disrepair, were taken over and evaluated by the allies after hostilities ceased. These evaluations provided much useful information for further development of jet aircraft following the war.

A number of He162 airframes still exist in museums around the world.

The Tamiya 1:48 kit first appeared in 2006. I believe that the kit is still available from some suppliers in the UK.

The kit is a typical Tamiya offering with well-engineered parts which fit perfectly. At the time of its release the kit was a great improvement over the DML 1:48 version of this aircraft which appeared in the early 1990s.

The kit parts are in medium grey plastic which is quite hard, but easily worked. There are markings for four aircraft in variations of the late-war RLM81/82 over RLM76 scheme. As the aircraft had a tricycle undercarriage, a small metal ball bearing is supplied to be fitted just behind the cockpit. The weight of this ball bearing is enough to ensure that the completed model sits correctly on its undercarriage without rocking embarrassingly back onto its tail.

A good replica of the BMW engine is supplied and this can be mounted on the aircraft itself or on a trolley for display. As ever, extra pipework and wiring (which is difficult to supply in an injection moulded kit) could be added by the modeller if so desired.