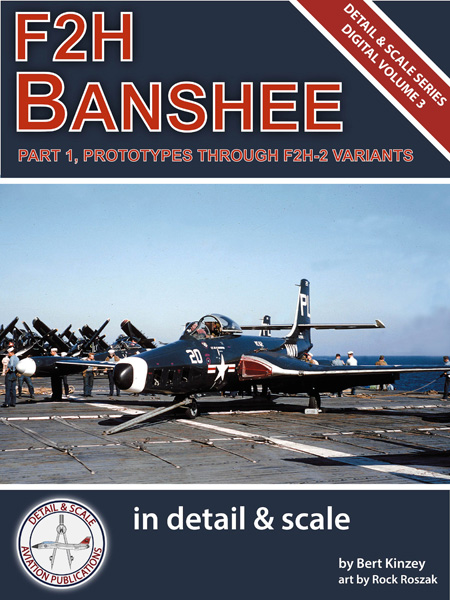 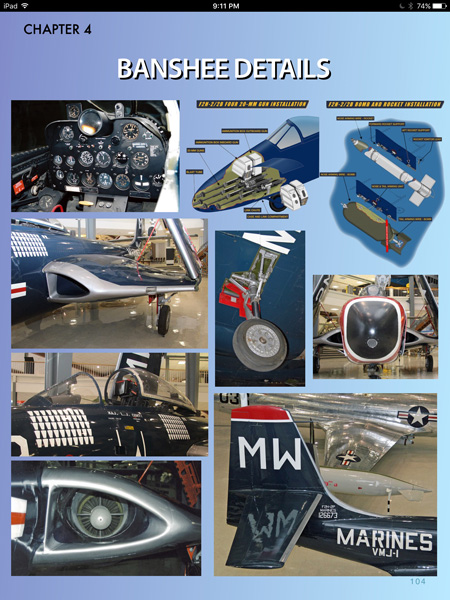 Get this excellent digital book here now at Detail & Scale

You will see that we have reviewed other releases by Detail & Scale in SMN and all I can say is that these are possibly the best, certainly amongst the very best, references available to scale modellers. They are simply superb with excellent numbers of high quality colour photographs, colour profiles, models, build help and guidance from what’s available and a complete one-stop-shop to the subject on offer.

From speaking to many scale modellers at shows, contests and events on our travels many of you have computers and other devices to hand when you are actually modelling and so what could be better than to have this great reference open too for ready referral.

Wherever you go, your digital book can go – great form when you are on the move, away from home travelling or just away from your book shelf – access is anywhere you can get the net and that’s just perfect for me!

This digital book on the F2H banshee comes highly recommended – as if you hadn’t guessed by now!

The Digital Detail & Scale Series continues with the newest title, F2H Banshee in Detail & Scale, Part 1: Prototypes Through F2H-2 Variants, covering the development, history, colour schemes, combat and operational use, and details of one of the most historically significant fighters to serve with the U. S. Navy and Marine Corps. Over the past 35 years, Detail & Scale has published six monographs, 69 full sized volumes, and now a total of four digital publication titles in the well-respected Detail & Scale Series and one in the Colours & Markings Series.

F2H Banshee in Detail & Scale, Part 1 continues the series focus on specific details of every aspect of this historic aircraft, but it includes so much more. It begins with a look at the developmental history of the Banshee, which started as an outgrowth of the McDonnell FH-1 Phantom, the first all-jet fighter to enter squadron use in the Navy. The Banshee advanced the design concept and would distinguish itself as only the second Navy jet aircraft to enter combat in Korea following the Grumman F9F Panther.

Each variant of the early Banshee is covered in its own section, including the XF2H-1 prototypes, the interim F2H-1 fighter, the definitive early variant in the F2H-2, and its derivatives, the nuclear-capable F2H-2B, the F2H-2N night fighter, and the F2H-2P photo-recon version. This detailed look at the aircraft is followed by a chapter covering the operational use of the Banshee in the Korean War. The aircraft details chapter, long the hallmark of the Detail & Scale Series, provides detailed coverage of the cockpit, windscreen & canopy, fuselage, internal armament, wings, pylons & external stores, engine, landing gear, and tail of the aircraft and contains more than 120 photos, mostly in colour, that illustrate every aspect of the F2H.

Another chapter covers the three official paint schemes worn by the early Banshees, from the Gloss Sea Blue standard, to the Light Gull Gray over white, to the overall white scheme worn by some aircraft near the end of their service. The Banshee Squadrons chapter contains photographs or profiles of Banshees in every Navy and Marine fighter, photo-recon, Reserve, and utility squadron that flew the aircraft, as well as test & evaluation facilities. Finally, as with all books in the Detail & Scale Series, a detailed look at all of the scale model kits that have been released of the early Banshee variants is presented.

The digital publication is available for $9.99 USD in both Apple iBook and Amazon Kindle formats. Book information and purchase links are available here on their website:
http://www.detailandscale.com/detailandscale_digital_publicationss.html