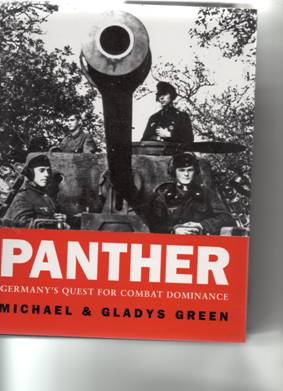 Our thanks to Osprey Publishing for supplying our review copy. Get this excellent reference book here now at: www.ospreypublishing.com

This is a new volume on the Panther with 288 pages of good quality glossy paper and broken down into nine sections:

We are taken through the need for a new medium tank and the influence of the T34 and the KV and as can be seen the Panther looks very similar to its Russian opponent. The book deals with all parts of what makes a tank, armour protection, mobility and firepower and as designed the Panther should have been a winner on the battlefield but it had flaws and was rushed into service to quickly with all the resulting failures.

The book compares the Panther to the T34 and the Sherman in all the chapters with details taken from WWII reports and also from post war studies as well. Of note is the time taken to construct the Panther and the cost which worked out roughly that for every Panther produced, six T34 were produced.

I am impressed with the photographs of the Panther which shows a great deal of the inside from a restored vehicle of the Military Vehicle Technology Foundation as well as photos from other sources. The pictures are in colour and are very good showing a great deal of detail. Other photographs are from wartime sources which give some idea of the usage and also some knocked out vehicles.
The last chapter details the variants and includes the Panzerbefehlswagen Panther, Jagdpanther, Bergepanther and the Panther turret pillbox. All of these are covered in a rather short manner but I think it will be a start if you are interested in researching further. The photographs in this section are very good and will be of use to modellers.

I like this book as each chapter deals with the relevant information in easy to read text which is well illustrated with great pictures, colour and monochrome as well as the odd diagram.

Of interest is the comparison of the delays with both the T34 and Panther and the interference of various individuals with both vehicles, regarding the Panther the use of the torsion bar suspension, the use of a petrol engine instead of a diesel and the insistence of Hitler in increasing the armour thickness which put more stain on the automotive systems. Compared with its adversaries the Panther on paper should have been the better medium tanks but it took too long to build, was expensive, difficult to service and it suffered from transmission problems. The Sherman was easy to service, was rugged, its gun was less effective than the Panther but there were far more of them. The T34 was probably the best medium tank of WWII with sloped armour, a diesel engine and very rugged construction.
This is a volume that does not show any new information to the Panther aficionado but is well worth having on ones shelf whether one is a history buff, military vehicle fan or a model maker.