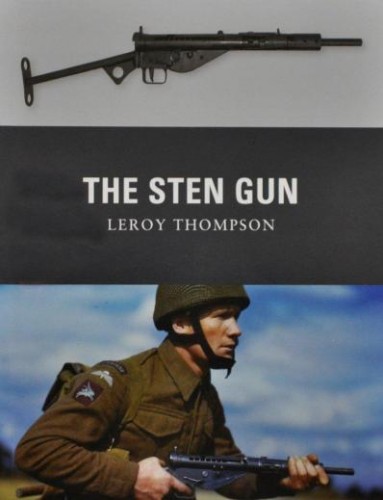 Our thanks to Osprey Publishing for supplying our review copy. Get this excellent reference book here now at: www.ospreypublishing.com

This is a new volume in the weapon series by Osprey and follows the format of former books. The book is 80 pages long with both monochrome and colour pictures with colour plates.

The Sten is a submachine gun which was officially designated the Carbine, Machine, Sten and was developed due to the pressing need for a cheap , easily produced weapon after the withdrawal from the continent and with the very real threat of a German invasion

The manufacture of the weapon had to be quick cheap and easy. This led to  most of the components being stamped which required minimum welding thus allowing assembly to be carried out not only in factories but in the cottage industry workshops and even by resistance fighters in the occupied countries.

The Sten was widely used by the Airborne forces, tank crew and as previously mentioned the resistance fighters as this was deadly at close quarters with the added bonus that it could use German ammunition. This was a gun that influenced the design of others such as the US M3 Grease Gun, the Australian Austen with copies being produced by Norway, France Poland, Argentina, Denmark as well as a German copy.

The Sten was used in WWII and after the conflict was used in the latter wars such as Korea, Malaya, Kenya and Palestine where it was locally produced for use by the Israeli forces. The successor was the Sterling which owed much to its design to the Sten and was introduce in limited numbers in 1944 and was used till 1988 by British forces.

This is a real Treasure of a book which covers the development, use and impact of the weapon with loads of information for such a small volume. These include cutaway colour plates coupled with colour art works and fascinating first hand accounts of a close quarter weapon and the story of its mass production.

The book will be of use to both the historian and model maker alike with the latter finding useful reference in the photographs as well as the text.