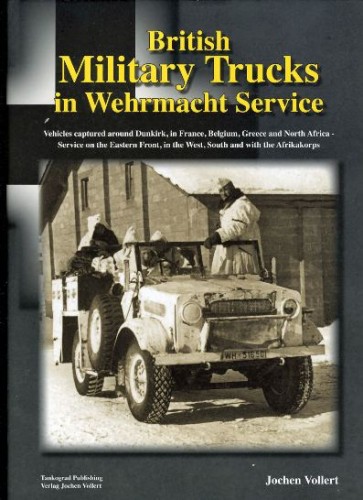 Back in 2005 Jochen Vollert produced Tankograd Wehrmacht Special N° 4004 ‘From Dunkirk to Moscow – British Trucks in Wehrmacht Service’ which was well received and prompted readers to request a further volume on ‘British Trucks in Afrikakorps Service’. This volume was never to see the light of day owing to the scarcity of accessible photos of that subject. It turns out that he was able to source over 20 photos of trucks in Europe for every one in North Africa. Nevertheless Jochen Vollert has managed to amass over 400 previously unpublished photographs of British trucks in use by the Wehrmacht from Europe to North Africa.

This is a companion volume to ‘British Military Trucks of World War Two’ published earlier this year (reviewed in this magazine by Bill Curtis) and, like its predecessor, is a weighty tome of 304 pages in A4 format. By and large, the quality of photography is outstanding, only a few shots lacking in the precision that the modelling fraternity demands.

Contents are as follows:

The introduction and acknowledgements on page 4 by Jochen Vollert, the author of this present publication and overall publisher of the Tankograd series should not be skipped as it underlines what a labour of love this book has been. 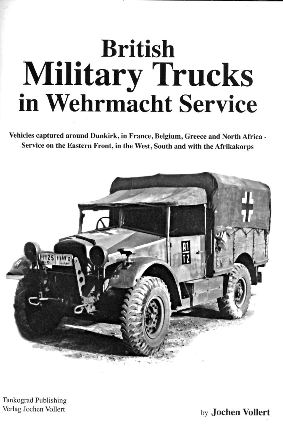 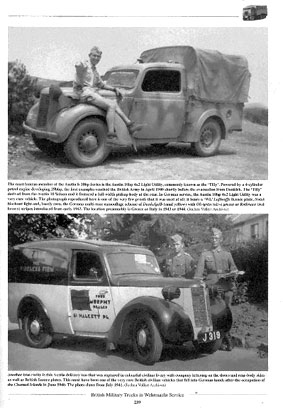 Part one deals, in great detail, with the Allied retreat and subsequent rescue from Dunkirk and the huge numbers of vehicles left at the water’s edge and inland. Overall, the author estimates that over 65,000 vehicles were left to the advancing Wehrmacht in various stages of repair. Those that had been effectively disabled providing spares to keep the others running.

The following sections of the book deal, in more or less alphabetical order, with the recovered vehicles, their immediate use and future conversion by the German Army. It is to be remembered that the popular image of a German Army speeding to victory in powerful modern vehicles is at variance with the great number of horse-drawn vehicles in use by the Wehrmacht especially in the early stages of the war.

The text, in all cases is clear and concise. A great help to the modeller seeking to create a model that is a little more unusual than the normal fare.

This, taken together with ‘British Military Trucks of World War Two’ is an outstanding contribution to the modeller’s reference shelf and to the vehicle historian alike. The range of manufacturers’ models of soft-skin vehicles both in injection plastic and resin is increasing by leaps and bounds. I can imagine my copy becoming battered with use as I seek for yet another subject for the rear echelon soft-skin dioramas that I know I shall complete one day.

A splendid work of reference covering so much previously unpublished material.

This book was purchased from “The Aviation and Military Book Centre” at £34.99

My sincere thanks to Mike for his first book review for SMN – thanks Mike.