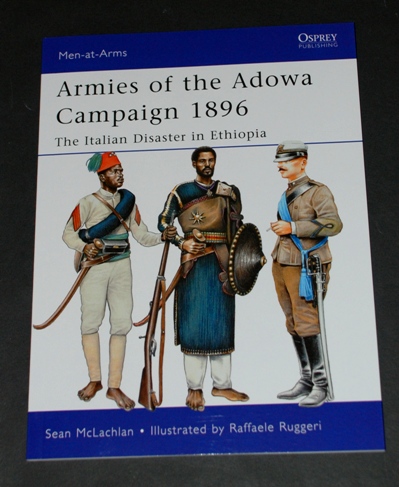 This is another of Osprey‘s Men at Arms Series, taking on its usual format comprising 48 pages, of which eight are of full colour plates. The book has photographs of the area, as well as some of the participants and also contemporary drawings.

The book’s author, Sean Mclachlan, has worked as an archaeologist for ten years before becoming a full time writer and has published books on travel and history. He spends time between Missouri, England and Spain, as well as carrying out several trips to Ethiopia for the research for this book, which included the battle field of Adowa. 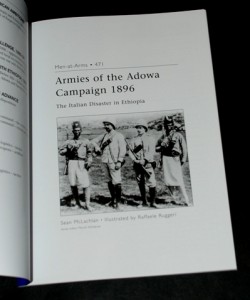 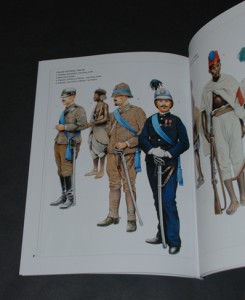 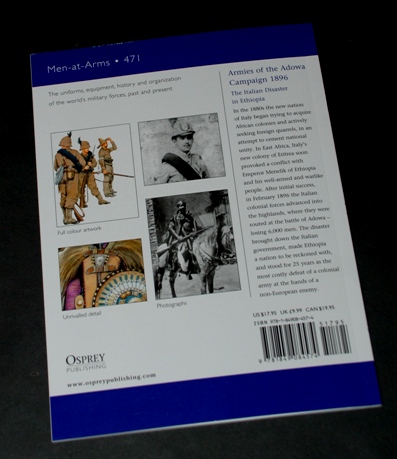 The book tells the story of the Italians’ disastrous involvement in Ethiopia, which had its roots in the 1880s as the new nation tried to acquire African colonies in an attempt to cement national unity. The colony gained in East Africa of Eritrea provoked a conflict with the Ethiopian Emperor Menelik, who was backed by his well armed and warlike people.

At first the Italians had some success and by February of 1896 the colonial forces had advanced into the highlands where they were routed at the battle of Adowa, which cost them 6000 casualties. This brought down the Italian Government and made Ethiopia a force to be reckoned with. This defeat stood as the most costly defeat of a colonial army at the hands of a non-European army for the next 25 years.

The book leads one through the start of Italy’s colonial ambitions, the chronology which includes the first actions at Agodat right up to the fateful battle and the retreat with its aftermath. There are two chapters devoted to the opposing armies which cover the characters, arms and tactics.

As with all Osprey books of this type, the colour plates are described in the latter part of the book and covers the uniforms of the various combatants.

I enjoyed this book as it is easy to read with a concise description of the Italian involvement in Ethiopia. The colour plates by Raffaele Ruggeri are very good, which will be of great interest to modellers and historians alike.