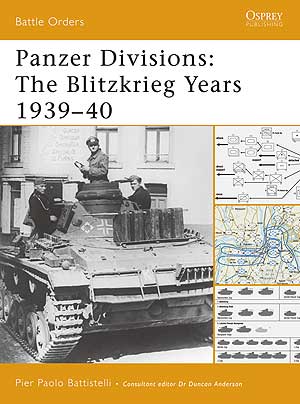 This is a soft cover book in the standard Osprey format of 163 x 252mm of 96 pages and contains 50 black and white photos, 6 colour maps, 37 tables/charts, Tactical and AFV symbols, a glossary index and bibliography.

This is the first of a series of three books which covers the organisation and equipment of the Panzer Divisions. The book is filled with lots of detail information covering the campaigns of the early war period 1939 to 1940.

The layout of the book is as follows:

For such a small volume it contains a mass of information which takes a little to assimilate but the book is broken up with a great number of photographs and charts. Of interest is the description of the various units with reference to their structure and how they differed from the theoretical establishment. What I found interesting was the details of the various sub units relating them to a specific time frame. Weapons and the equipment used by these units are covered in some detail with limitations due to the size of the publication. Their are tables listing the panzer strengths during the campaigns ofPolandandFrance, as well as the specifications of the French armour.

The combat operation described in the book cover one engagement in the polish campaign while the French one is covered with five separate encounters which also contain Tactical maps.

The book was supplied by Osprey Books for review and though this is not a new title it is one that deserves to be read and will no doubt appeal to the historian as well as the model maker who wants to get information on the Panzer divisions. The amount of information is staggering for the size of book and the pictures have some I have not seen before. For those wishing further reading a bibliography is included.

All in all this is a really good book and if you are interested in the Panzer Forces then this is a definite book for your collection.