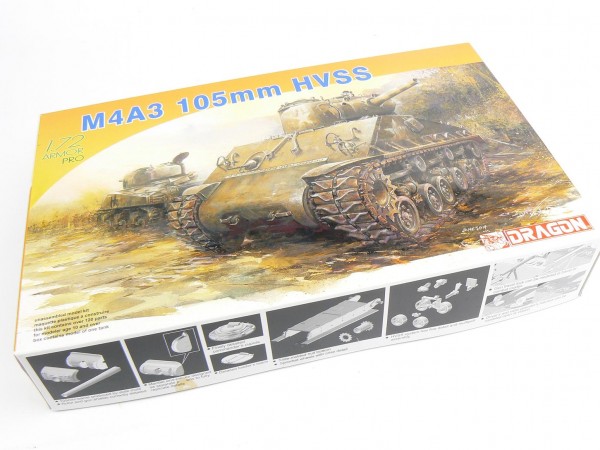 How it builds up…

Here’s a few hot off the press shots of this kit fully-built, taken from our recently-uploaded Finished Now review. Click on the thumbnails to enlarge the images and enjoy!

This kit is one of a series of Sherman’s from Dragon and the moulding is exactly what we have come to expect from the market leaders in small scale armour.

The upper hull is slide moulded, which has allowed for extremely impressive detailing.

A couple of the tools are moulded in situ, however some are also separate (such as the shovel), which is neat. The louvers on the engine deck have all the bolt and rivet detail, which is rather neat.

The turret is again slide moulded and captures the cast of the original nicely. There are many tiny parts still to be added though, so be careful not to knock these off during handling.

The mantlet is again well moulded, although some commentators have stated it’s slightly undersized though I’m no AFV expert, let alone a “Shermaholic”, so I never noticed.

The barrel is in one piece and hollow with the merest hint of a mould seam, which will need removing with a sanding sponge.

The running gear is fairly complicated with each bogie made up of 8 parts, however this does mean all the detail is captured nicely.

Tracks are the DS type, which some will like. These can be fixed with ordinary plastic cement, although go careful as they are extremely fine; superglue maybe a better bet. The tracks are the later T80 type so it shouldn’t be too hard to modify this into a Korean war vehicle.

A small photo etch fret is supplied, offering front mud guards and the rear stowage rack. However, for those not liking this medium, there are plastic parts on the sprues.

Overall this is a stunning product but you do pay for it. At £13, it’s not cheap but it should prove to be a challenging but rewarding project.

Now see how it goes together in the full build review!