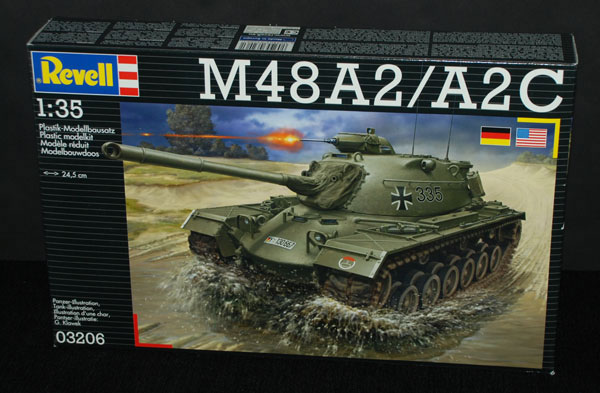 Thanks to Revell for supplying our review sample. Revell model kits are available from all good toy and model stores. For details visit www.revell.de/en

The M48 Patton is a main battle tank (MBT) that was designed in the United States. It was the third tank to be officially named after General George S. Patton, commander of the U.S. Third Army during World War II and one of the earliest American advocates for the use of tanks in battle. It was a further development of the M47 Patton tank. The M48 Patton was in U.S. service until replaced by the M60. The M48 served as the U.S. Army and Marine Corps primary battle tank during the Vietnam War. It was widely used by U.S. Cold War allies, especially other NATO countries.

The M48 Patton tank was designed to replace the previous M47 Pattons and M4 Shermans. Although largely resembling the M47, the M48 Patton was a completely new tank design. Some M48A5 models served well into the 1980s with American forces, and many various M48 Patton models remain in service in other countries. The M48 was the last U.S. tank to mount the 90 mm tank gun, with the last model, the M48A5, being upgraded to carry the new standard weapon of the M60, the 105mm gun.

Kampfpanzer M48A2 A2C: Served together with the M47 starting in the late 1950s (the M47 was replaced by the Leopard 1). When the Leopard 2 came into service they were sent to the Heimat-Schutzbrigaden (“home defence brigades”) of the Territorialheer (Territorial Army). Many were later upgraded to M48A2GA2 standard.
Kampfpanzer M48A2 GA2: Upgraded version with the 105 mm L7 cannon and a different MG3 installation from the Leopard 1 as well as quite a few other assemblies. The tank served with tank battalions and in the 5th (heavy) company of some Jäger Battalions of the Territorial Army. 650 were converted by Wegmann (Kassel) between June 1978 and November 1980 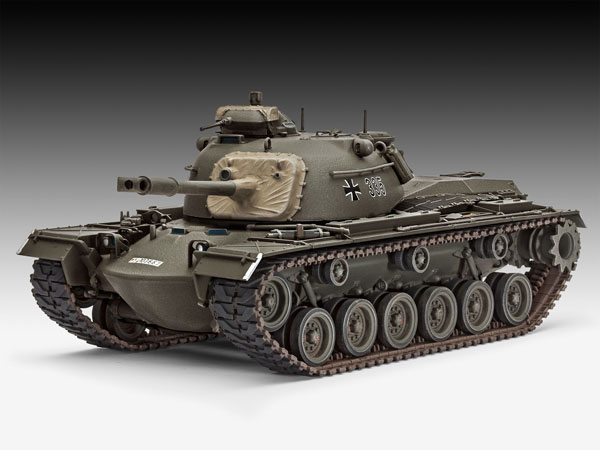 This is the slightly earlier version of the M48 Patton tank released as a new-tool this year by Revell thereby adding this M48A2 A2C Patton main battle tank in 1:35 scale to their range and is good by any standards.

Moulding quality is to a high standard with very fine levels of detail across the board. The attached images should speak for themselves and you can decide what you think, especially as armour is probably your area. So I offer a basic insight into this Revell kit that’s widely available and this will be good news to all of you that are interested in armour modelling in this scale.

Five sprues moulded in dark green plastic form the basis of the model, rubber tracks, tow cable, a set of instructions, and small decal sheet make up the package.

This is a good-sized model, as is the real subject. You can see that the hull top is very clean and crisp, as is just about everything else. The detail is cleanly and accurately moulded onto the cast-textured turret surface and will look excellent when spray painted and given a subtle wash and maybe filters. The moulded detail throughout is good and although I can’t give an opinion on accuracy, what you get certainly looks consistent with some of the images I have seen on the Internet.

The detail on the hull top, range of small detail equipment accessories and fittings and simply the subject are all positive features of the kit. You’ll see from the images attached of the completed manufacturer’s kit that it will look impressive when completed. I really like that cast turret and aerial wires.

The tracks are supplied as one-piece rubber items and moulded detail is good – at least you won’t have to assemble lots of tiny individual track links but again, I know rubber tyres and accessories are not everyone’s cup of tea. They do still look and feel good though, so I think they are OK, especially if you spend time painting and weathering them – so what’s provided looks alright even in 1:35 scale.

A metal aerial wire is supplied as with many Revell armour kits. 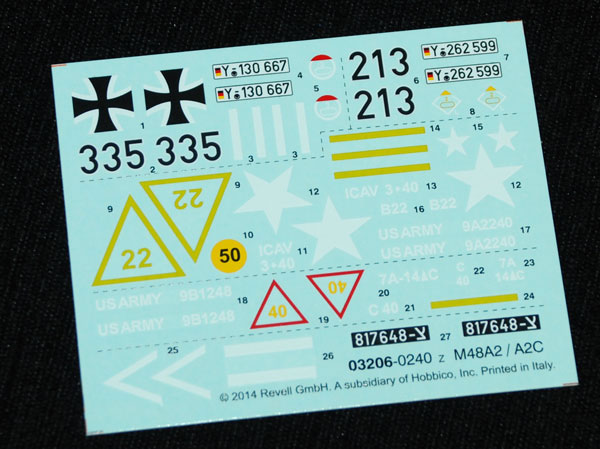 There’s a small sheet with the respective number plates and unit badges for the German options contained in the kit. The quality looks good overall, although there is carrier film visible around most of the items, but applying them to a glossy finish should ensure that doesn’t show. Lots of various numbers are included for you to make up registration plates of your choice.

These follow the usual Revell format with Revel colour references, parts and sprue layout diagrams followed by a 37-Stage build and finishing sequence. The sequence looks to be logical to me but of course you will want to leave off all the small, delicate parts like the aerial until near the end of the build to avoid damage.

This is a good package and I reckon that you’ll be made up if 1:35 armour modelling is your area of interest – there’s just something about the shape of the M48 that looks ‘right’ – classic even. Most of the mainstream manufacturers are releasing plenty of current AFV models and this can only be good news for us modellers! Levels of detail are excellent for the scale and fit looks to be clean and pretty trouble-free.