It’s great to be able to bring you another of Lou’s great builds in the Short Feature Article series in SMN – what a lovely colourful subject it is too, not to mention the excellent port setting making for an authentic diorama. Certainly a very different subject to some of the more usual ‘all-grey’ warships and vessels of the period.

As is usual with this series, few words but enough photos to give you a good idea of what’s involved in a project like this one. They may seem daunting but I’m sure Lou would be the first one to say “have a go!” Inspirational – certainly with many small ideas and tips on materials and approach that will help you in any maritime build project that you undertake. 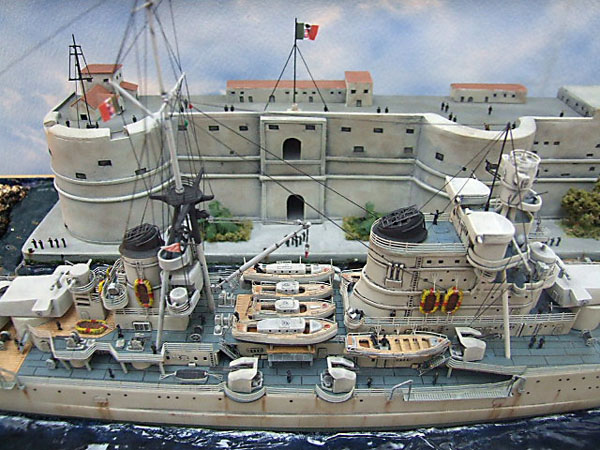 Here’s a little bit of background to the vessel Pola and then it’s over to Lou to put his project in context.

A little bit of background on Regia Marina Italiana Pola

Pola was a Zara-class heavy cruiser of the Italian Regia Marina (Royal Navy). She was built in the Odero-Terni-Orlando shipyard in Livorno in the early 1930s and entered service in 1932. She was the third of four ships in the class, which also included Zara, Fiume, and Gorizia. Pola was built as a flagship with a larger conning tower to accommodate an admiral’s staff. Like her sisters, she was armed with a battery of eight 203-millimeter (8.0 in) guns and was capable of a top speed of 32 knots (59 km/h; 37 mph).

Pola initially served as the flagship of the 2nd Squadron, and in 1940 she led the squadron during the battles of Calabria and Cape Spartivento, in July and November, respectively. During the latter engagement she briefly battled the British cruiser HMS Berwick. Pola was thereafter reassigned to the 3rd Division, along with her three sister ships. The ship took part in the Battle of Cape Matapan in late March 1941. During the battle, she was disabled by a British airstrike. Later, in a fierce night engagement in the early hours of 29 March, Pola, Zara, Fiume, and two destroyers were sunk by the British Mediterranean Fleet with heavy loss of life.

Pola was 182.8 meters (600 ft) long overall, with a beam of 20.62 m (67.7 ft) and a draft of 7.2 m (24 ft). She displaced 13,944 long tons (14,168 t) at full load, though her displacement was nominally within the 10,000-long-ton (10,000 t) restriction set in place by the Washington Naval Treaty. Her power plant consisted of two Parsons steam turbines powered by eight oil-fired Yarrow boilers, which were trunked into two funnels amidships. Her engines were rated at 95,000 shaft horsepower (71,000 kW) and produced a top speed of 32 knots (59 km/h; 37 mph). She had a crew of 841 officers and enlisted men. Pola was designed to function as a squadron flagship, and so her forward superstructure was larger than that of her sisters, and was faired into the forward funnel.

She was protected with an armoured belt that was 150 mm (5.9 in) thick amidships. Her armour deck was 70 mm (2.8 in) thick in the central portion of the ship and reduced to 20 mm (0.79 in) at either end. The gun turrets had 150 mm thick plating on the faces and the barbettes they sat in were also 150 mm thick. The main conning tower had 150 mm thick sides.

Pola was armed with a main battery of eight 203 mm (8.0 in) Mod 29 53-caliber guns in four gun turrets. The turrets were arranged in super-firing pairs forward and aft. Anti-aircraft defence was provided by a battery of sixteen 100 mm (3.9 in) 47-cal. guns in twin mounts, four 40 mm (1.6 in) guns in single mounts and eight 12.7 mm (0.50 in) guns in twin mounts. She carried a pair of IMAM Ro.43 seaplanes for aerial reconnaissance; the hangar was located in under the forecastle and a fixed catapult was mounted on the centreline at the bow. 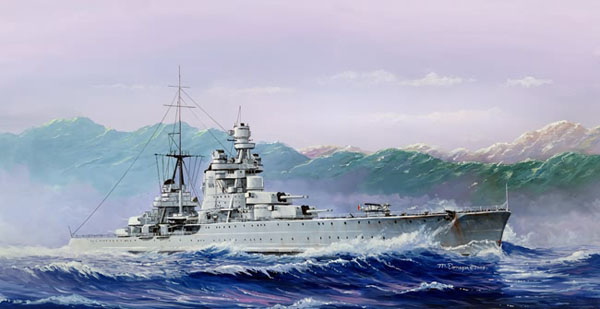