Introduction to my project

It was only when I looked (and concentrated) that I realised that this Pontos kit was designed for the Prince of Wales (POW) and makes up into the KGV and apparently into the Duke of York too.

The instructions take a bit of figuring out on this score as there is no defined sequence for each ship.

Aside from this (and some points raised later) this, as I said in my review, looks to be the most complete update that I have ever seen.

Although the Tammy kits of POW and KGV are basically alike, they are not exactly the same and the sprue numbers differ so I had to buy the POW kit. I had bought the Pontos update because I already had a KGV unbuilt – and it will remain so! 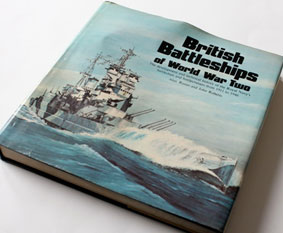 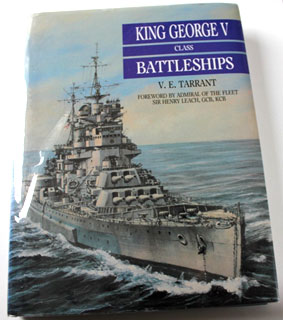 The history of the KGV class is well told in V Tarrant’s book on the KGV class. There are numerous photographs of the various ships in the class but disappointingly few close ups.

The Raven / Roberts book on British battleships is useful for general reference on armaments etc. There are also close ups of the KGV class ships which are helpful.
There are very few colour pics of the KGV in the period covered by the Pontos update. This is pre 1941 when the ship was still equipped with the UP launchers (an early and rather ineffective anti aircraft rocket battery).
I have found a colour pic on the net and judging by the amount of times I have seen it since my hunt began, it must be the only one!

The colour seems to be an all over grey but showing through is a lighter grey and black. A tempting piece of weathering coming up here!!

Another shot of the stern shows a similar scheme. The UP launchers on Y turret and the stern are clearly visible here. Later on these were replaced with eight barrelled pom poms.

Pontos have a replacement service for broken and missing parts and I had to test it because the last two barrels I had for B turret were different sizes.
They were as good as their word and one e-mail to Kim solved the problem and they were in my workroom a matter of days later. Thanks Pontos!