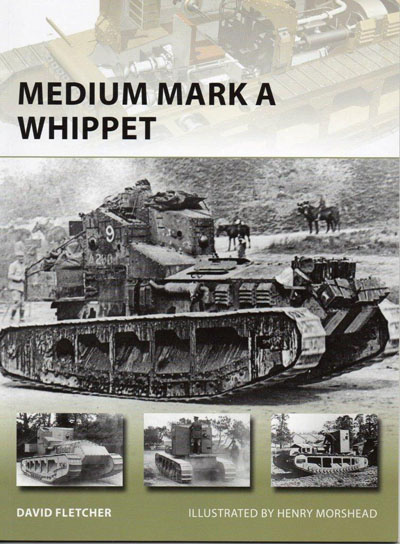 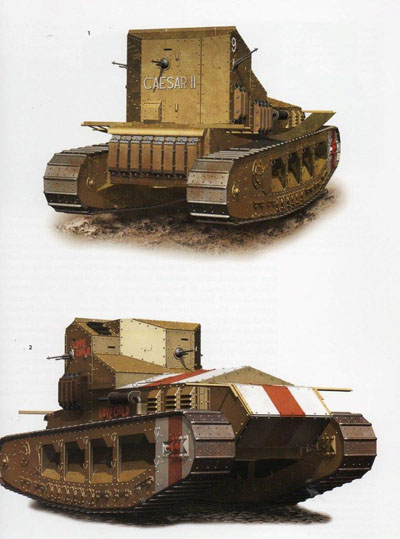 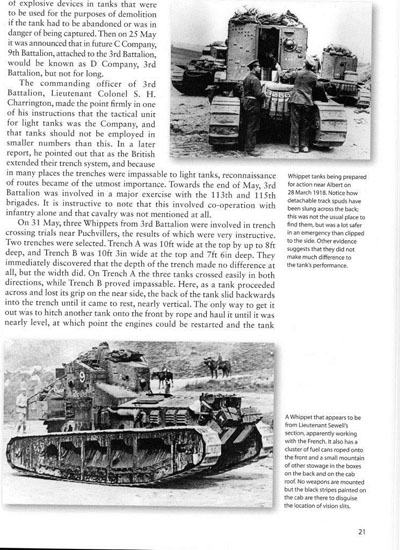 This A.F.V. was intended for fast mobile assaults in other words to exploit the openings made by the heavier and slower tanks. The crew compartment was a fixed, polygonal turret at the rear of the vehicle, with the two engines of the type used in contemporary Double Decker buses were in a forward compartment, driving one track each. The driver was the only crew member who was seated while the other two of the crew stood in the rear behind the engine making it noisy and full of engine fumes as well as the powder fumes when the Hotchkiss MG’s were fired. Production started in 1917

The book is in the New Vanguard series number 207 and in between its covers the design, development and the use of Whippet. It has several black and white pictures with twelve colour plates of which one is a cut away.

This volume follows the standard Osprey format and is divided into the following sections:-
a) The Whippet’s Forerunner: The Tritton Chaser
b) Production of the Whippet
c) Driving the Whippet
d) The whippet in Action
e) Whippet’s Abroad
f) Medium B
g) Medium C; The Hornet
h) Medium D
i) The Studebaker Tank
j) Index.

The Medium Mark A was one of the most successful British Tanks of WWI being involved in several well known incidents over the course of the conflict, such as the clash at Cachy on 24th April 1918 and Sewell’s VC winning exploits with 3rd Battalion on 29th August. It served past its deployment on the Western Front being deployed in Ireland during the Anglo Irish War, the expedition to Russia and some going to Japan.

The book examines the Whippet in detail, from its design through development, its operational service using battalion records and diary entries from the First World War period.

The latter part of the book covers other medium tanks of the Great War period and lastly an index.

As usual with this type of Osprey book, it’s full of information, well written and easy to read giving a good coverage of this vehicle. The portion of the book covering the in-action descriptions have some very interesting stories of early tank actions. The follow up of other various tanks give some sense of tank development in the inter-war years.

I think for its price this is a great value book with lots of information and a good introduction into the Whippet.